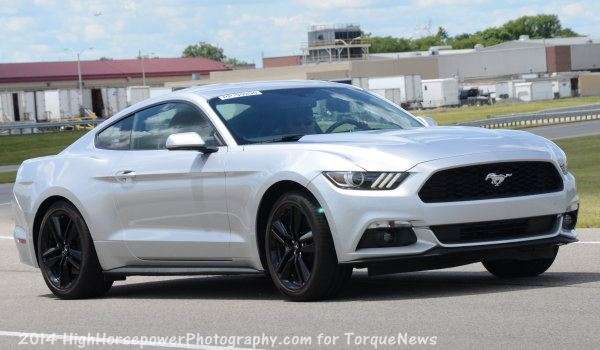 Ford recommends that the 2.3L EcoBoost 4-cylinder in the 2015 Mustang be run on premium fuel for the best performance, but a new report indicates that the power numbers drop significantly when lower octane gasoline is substituted to save on fuel costs.
Advertisement

Like so many of the big insider topics on the 2015 Ford Mustang, this spicy bit of information comes from the folks at Mustang6g.com. This information isn’t officially from Ford – in fact, Ford reps have refuted the correctness of the information – but it does come from Ford materials that weren’t intended for public consumption.

Reduced Power on 87 Octane
Someone in the Mustang6g.com community got ahold of a Ford training manual that explains that when the 2015 Mustang EcoBoost is run on 87 octane, the computer adjusts for that reduced fuel quality. When the computer makes those adjustments, it reportedly reduces horsepower from 310 down to 275 while torque drops from 320lb-ft to 300lb-ft. This is a pretty significant decline for something as seemingly minor as lower octane fuel, but it goes to show how important it is to run premium fuel in a performance vehicle. The extra cost is worth the money, especially in the case of the 2015 Mustang.

Those lowered power figures account for an 11% reduction in horsepower and a 6% decline in torque, although it was originally believed that running 87 octane in the 2015 Mustang EcoBoost would reduce power by some 13%. For those who don’t want to do the math, a 13% reduction in power would give the 4-cylinder Mustang around 270 horsepower.

Ford Disputes These Numbers
According to Autoblog, Ford Motor Company reps insist that these numbers are not accurate. The company won’t officially say how much the horsepower drops when you run the 2015 Mustang EcoBoost on 87 octane, but the company insists that torque levels remain unchanged. In other words, perhaps the horsepower numbers in the training manual are correct, but it seems to be all but official that the torque output is still 310lb-ft on the cheaper gas.

Based on the lack of comment on the horsepower numbers, perhaps the original estimate of 13% is indeed accurate for the loss on 87 octane and Ford is happy to let us all think that it is only 11%.

Don’t Be Cheap, Feed Your Mustang Premium Fuel
While the 2015 Ford Mustang EcoBoost can be run on 87 octane, owners of the new turbocharged pony should do themselves and their cars a favor and pay the extra 20 cents a gallon for premium fuel. Considering that gas prices are hitting modern lows around the country, there is really no reason that someone who just bought a 2015 Ford Mustang cannot foot the bill for the better gasoline. Not only is it better for your turbocharged engine, but it also allows you to unlock the full potential of your boosted pony car.

Also, now that Ford Performance is rolling out a line of tuners for the 2015 Mustang EcoBoost that will reportedly add a whopping 90lb-ft of torque, owners will have another reason to run premium fuel. Should the Mustang EcoBoost tuner offer the same 90lb-ft increase as the Focus ST, the new pony car would pack a whopping 410lb-ft of torque – but likely only on premium fuel.