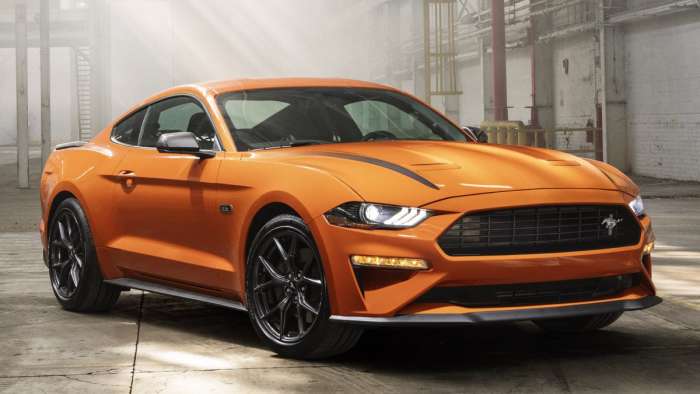 Ford Mustang EcoBoost Gets a Factory High Performance Package for 2020

The big news for the 2020 Ford Mustang is the long-awaited introduction of the new Shelby GT500 with more than 700 horsepower, but the Motor Company is also adding some performance on the other end of the lineup. The base model EcoBoost Mustang will be available with the 2.3L High Performance Package for 2020, lifting the power output of the turbocharged four-cylinder engine, broadening the peak torque band and adding some performance parts from the Mustang GT to create a pony car built specifically to rule the autocross scene.

EcoBoost Power
The key aspect of the 2.3L High Performance Package is – as you might expect – the four-cylinder EcoBoost engine of the base model Mustang. This package begins with a die-cast alloy engine block and high performance cylinder head that are similar to the setup on the Focus RS, adding 63-millimeter twin-scroll turbo compressor that is 5% bigger than the “snail” on the basic EcoBoost Mustang.

These features lead to 330 horsepower and 350 lb-ft of torque, along with offering a wider powerband that improves every area of acceleration. Ford expects the Mustang with the EcoBoost High Performance Package to dash from a stop to 60 in the mid-four-second range while hitting a top speed of 155 miles per hour.

“It’s not just the horsepower gains over the standard 2.3-liter EcoBoost, it’s the broader torque curve that delivers 90 percent of peak torque between 2,500 and 5,300 rpm, which is 40 percent wider than the base EcoBoost engine,” said Carl Widmann, Mustang chief engineer. “Plus, horsepower holds stronger up to the 6,500-rpm redline – enabling more usable power and torque for enthusiasts and weekend autocrossers to enjoy.”

In other words, this extra power makes the base Mustang quicker on the short end, stronger in the mid-range and faster on the big end.

This package is available with either the 6-speed manual or 10-speed automatic transmission and as either a coupe or convertible. Pricing will be announced closer to dealer launch, which is scheduled for this fall.

Mustang GT Performance Parts
Ford wanted the 2.3L High Performance Package to be more than just a bump in power, so the team added an array of performance bits from the V8-powered Mustang GT. This includes the four-piston brake calipers over 13.9-inch rotors up front, a 32-millimeter solid front sway bar, a tubular 24-inch rear sway bar, a unique tune for the electronic steering system, special calibrations for the drive modes, a 3.55 rear differential, package-specific 19x9-inch wheels and GT aero bits, including the front splitter, the belly pan and brake cooling ramps.