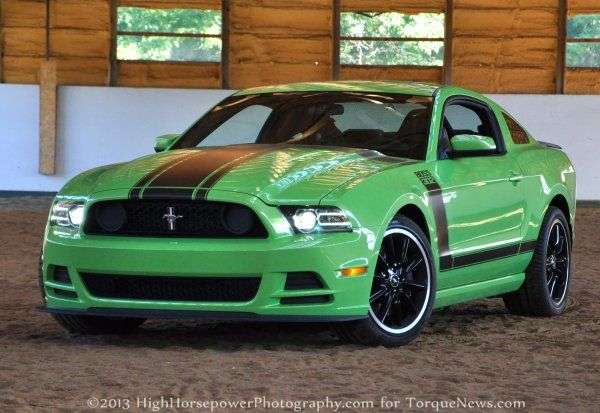 The sales numbers from each of the Detroit automakers are in and for only the third time this year, the Ford Mustang has beaten the Chevrolet Camaro and the Dodge Challenger to claim the monthly sales title for October 2013 – but the Blue Oval-clad pony car still sits well behind the Camaro in the annual sales battle.
Advertisement

It hasn’t been a great year for the Ford Mustang or the Chevrolet Camaro with both of those Detroit muscle cars posting an overall decline in sales through the first ten months of 2013 but Ford Motor Company is still hoping that Mustang sales numbers will stay strong enough through the 4th quarter of the year to knock the Camaro out of the top spot in muscle car sales. Since being introduced for the 2010 model year, the Camaro has claimed the annual sales title three straight times and with a hefty lead coming into October – the Mustang really didn’t stand much chance of catching the Camaro.

However, with strong sales numbers in October, the Ford Mustang was able to claim its 3rd monthly muscle car sales title of 2013 and close the gap a bit between itself and the Chevrolet Camaro in the annual sales race. With 6,918 units sold last month, the Mustang posted its 5th best sales month of the year which is a bit surprising as we head into the cold winter months that are typically worse for rear wheel drive sports cars. That figure was more than enough to comfortably beat the Camaro and Dodge Challenger in monthly sales and while the strong 10th stanza of 2013 allowed the Mustang to gain some ground on the Camaro – Ford will need to finish the year very strong to stop the Camaro from claiming its 4th straight sales title. On the year, Ford has sold 66,083 copies of the Mustang; down 8.4% from the first ten months of 2012.

While the Ford Mustang had one of its stronger months of 2013 in October, last month proved to be one of the worst months of the year for the Chevrolet Camaro. With “only” 5,669 Camaros sold in October, the Camaro did about 10% better than it did in October 2012 but it wasn’t anywhere near enough to keep up with the Mustang. This low sales figure is especially surprising considering that the 2014 Camaros have begun reaching dealerships around the year and with the refreshed exterior would generally come a jump in sales. Perhaps some consumers around the country are waiting for the 2014s to hit their local dealership but in any case, October wasn’t a great month for the Chevrolet Camaro. On the year, Chevrolet has sold 70,484 Camaro coupes and convertibles which allows GM to maintain a lead of 4,401 units over Ford’s Mustang in the run for the 2013 muscle car sales title.

Muscle car sales haven’t been fantastic this year but with a new Ford Mustang expected early next year followed by the next generation Chevrolet Camaro and Dodge Challenger within the next few years – sales numbers for the Detroit muscle cars could continue to grow over the coming year.

Jean Jack wrote on November 1, 2013 - 9:20pm Permalink
I think muscle car sales would have been even higher if they were little more economical. The mileage is not very attractive for the average American. But I guess people who buy these cars don't worry about the MPG.