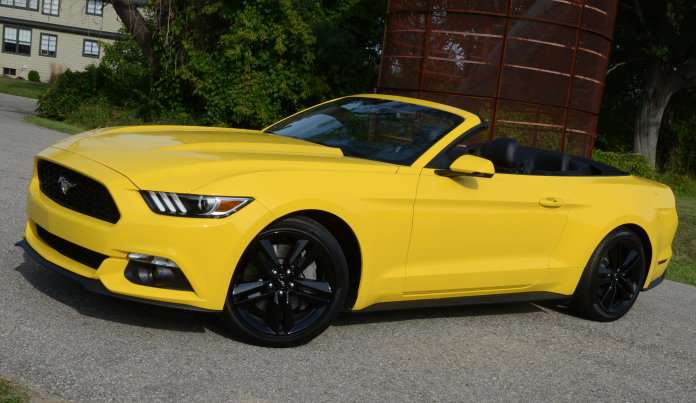 Ford China has announced their sales numbers for August 2017 and, not surprisingly, figures for the mighty Mustang continue to improve while a few other Ford performance models and the entire Lincoln brand improve as well.
Advertisement

The Chinese auto industry has become a key battleground in the global industry and while Ford Motor Company as a whole saw sales numbers in August 2017 drop compared to the same month last year, performance models including the Mustang, the Focus RS, the Focus ST and the new F150 Raptor all showed year over year growth – as did the Lincoln brand.

Ford Performance is Popular in China
The numbers that we are about to discuss will almost certainly seem extremely low to anyone who is familiar with American sales numbers, but try to keep in mind that sales growth isn’t about volume as it is growth. Ford sells far more performance vehicles in the US than they do in China, but the critical factor here is year over year sales growth – or how sales for August 2017 compared to sales for August 2016. Based on that key metric, the high performance Focus models improved by 37% and the Mustang improved by 80% while sales of the new F150 Raptor remained strong – although the lack of Raptor availability in 2016 prohibits us from having a solid year over year comparison.

In August 2017, Ford China sold 336 units, up 80% from the 187 Mustangs sold in the same month last year. The Focus ST and Focus RS combined for 26 units, up 37% from the 19 units sold last August and Chinese buyers snatched up 88 examples of the new F150 Raptor. The Raptor wasn’t available last year, so there is no growth number, but considering that Ford China sold more than three times as much high performance, full sized trucks as they did high performance compact cars – it is safe to say that the Raptor is proving to be quite popular in China. Mind you, those performance models showed sales growth in a month where Ford China saw an overall decline of 6%.

China Loves Lincoln
Anyone who has driven a new Mustang, a new Raptor or either of the high performance Focus models likely has no questions as to why they are so popular in China, but the big surprise is the sales success of the Lincoln brand. Lincoln hasn’t been doing all that well in the US, but in China – where buyers love luxurious sport utility vehicles – the SUV-heavy Lincoln lineup is booming.

In August 2017, Ford China sold 5,240 Lincoln vehicles, up 105% compared to the same month last year and with 34,494 units sold through the first 8 months of 2017, the Lincoln brand is up 94% for the year. The MKZ, MKC, MKX and Navigator all posted huge sales growth in August while also all posting big gains for the year to date – all of which is helped by the early popularity of the new Lincoln Continental. In fact, Lincoln sold more Continentals in China last month (996) than the brand did in the US (816), so while Chinese buyers love SUVs, they also love the new premium luxury sedan.

Why Chinese Sales Matter in the US
Some of you are surely reading this and wondering why it matters to anyone in the US whether or not the Mustang or the Lincoln brand are selling well in China. Well, the Chinese market has a whole lot of money and a whole lot of people looking to buy new vehicles with that money, making China a key battleground for every automaker. China is one of the quickest growing auto industries and with the automotive industry become heavily globalized, every major automaker wants a piece of that Chinese action. Even though Ford isn’t moving huge numbers of vehicles in China, the steady sales growth of key models contributes to the company’s bottom line, so when someone buys a Mustang or a Raptor in China – they are contributing to the global success of the Ford Motor Company while also giving FMC a bigger piece of the pie in that key market.