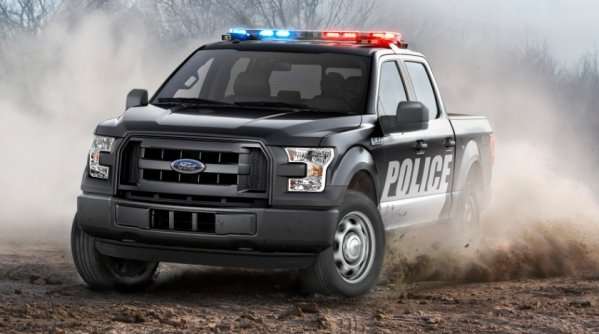 Ford has rolled out their new F150 Special Service Vehicle package, otherwise known as an F150 police truck, helping to extend the Motor Company’s already-large offering of vehicles intended for police department use – joining the familiar Taurus based Police Interceptor sedan and the Explorer-based Police Interceptor Utility, along with the Special Service Vehicle packages for the Transit and the Expedition.
Advertisement

Regardless of where you live in the United States, the odds are pretty good that your local police department uses the Ford Taurus, the Ford Explorer and they may even have some specially equipped Ford F150 pickups for daily-use vehicles. My local police also have a few Dodge Charger and Chevrolet Caprice cruisers, but as has been the case for many moons – the majority of the local police vehicles are built by Ford Motor Company. Even though Ford has a pretty firm grasp on the police vehicle segment, the Motor Company has continued to roll out new options for police departments and other emergency support crews around the country. The newest entry to the police vehicle lineup from Ford is the F150 Special Service Vehicle package.

The 2016 F150 Police Truck
The new 2016 Ford F150 Special Service Vehicle package comes only in the XL trim, with either the SuperCrew or SuperCab configurations. Departments can pick from rear wheel drive or four wheel drive and they can opt for the 5.0L V8 or the 3.5L EcoBoost V6 – both of which are mated to a 6-speed automatic transmission. This means that the F150 police trucks will have either 385hp and 387lb-ft of torque (V8) or 365hp and 420lb-ft of torque (EcoBoost), but in both cases, these should be relatively quick pickup trucks with the lightweight aluminum bodies.

Unique to the F150 Special Service Vehicle package is a vinyl rear bench seat and a vinyl floor lining rather than carpet, both of which make for easy cleanup. The front bucket seats are unchanged, but the center console/seat assembly is removed to make room for police-specific equipment such as the lighting controls and the computer station.

Finally, the F150 police vehicle gets a high output 240 volt alternator that helps to keep the battery charged while the truck is idling with the many electronic gadgets running inside and out.

A Big Police Vehicle Family
The 2016 Ford F150 police package joins the biggest lineup of police vehicles in the US, so while both Chrysler and General Motors have their own police vehicles – no one offers a spread like Ford. After the Taurus-based Police Interceptor Sedan and the Explorer-based Police Interceptor Utility were rolled out first, the company introduced the Transit Prisoner Transport and the lower performance Taurus-based Special Service Vehicle sedan. Finally, the F150 and the Expedition both get a similar Special Service Package, meaning that shy of motorcycles – Ford Motor Company can satisfy pretty much any request for a police department.

“We offer a whole family of police vehicles,” said Arie Groeneveld, Ford chief program engineer for police vehicles. “Our lineup aims to fulfill the unique needs of law enforcement officers, and our F-150 Special Service Vehicle is an extension of that offering. This vehicle definitely lives up to its Built Ford Tough reputation.”

My local police department has several F150 pickups for patrolling the area's unpaved roads and lake areas, so I expect that I could be seeing one of these on the road fairly soon.