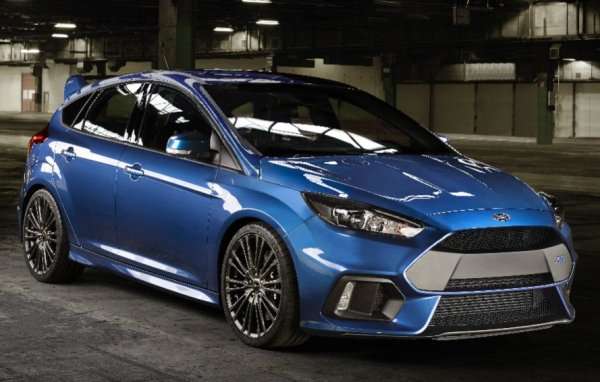 Ford Motor Company has announced that the new high performance Focus RS will make its US debut at the 2015 New York International Auto Show next week and with any luck, this grand introduction will include just how much power the hottest American hatch will produce with the 2.3L EcoBoost 4-cylinder from the new Mustang.
Advertisement

The Ford Focus RS made its official debut back in February online and at a small media event overseas followed by a first public showing in Geneva, but when the 2015 New York International Auto Show opens to the public next month, it will be the first time that American gearheads will be able to check out the new turbocharged hatchback in person. More importantly, this will be the first time that American show-goers can check out a high performance RS package that will be sold in the United States, as this Focus RS will be the first sold in the USA.

"Customers have begged for the Focus RS to come to the United States for years and now we can say that they are getting one of the most innovative, powerful and best-looking RS cars ever. That is special,” said Raj Nair, group vice president, Global Product Development, Ford Motor Company. "The RS line has a proud history of technical breakthroughs. It's a great example of our passion for innovation through performance, and creating vehicles that make people's hearts pound."

The Hottest US Hatch Ever

While Ford has been tightlipped about the exact specifications of the new Focus RS, we know that it will be powered by the same 2.3L 4-cylinder EcoBoost that is found in the 2015 Ford Mustang. In the Mustang, the turbocharged 2.3L mill offers 310 horsepower and 320lb-ft of torque, but Ford has promised that the Focus RS will have at least 315 horsepower, making it the most powerful factory stock American hot hatch to date. Even if the Focus RS “only” has 315 horsepower and 320lb-ft of torque (same as the Mustang), it will be considerably more powerful than the Focus ST with 252 horsepower – or anything offered up by General Motors (Cobalt SS) or Chrysler Group (Dodge Neon SRT4) in the past.

In addition to the turbocharged 2.3L EcoBoost engine, Ford has made it official that the new Focus RS will have an advanced all-wheel drive system and a proper manual transmission. Considering the power output, the size of the Focus itself and the standard all-wheel drive system, the Focus RS should be able to go head to head with the hottest models in the American sport compact segment – namely the Subaru WRX STI and the Mitsubishi Lancer Evolution. The Subaru has 305 horsepower and 290lb-ft of torque while the Evolution has 291 horsepower and 300lb-ft of torque, meaning that the Focus RS will almost certainly be the top dog in terms of power levels among the smaller performance models.

How Much Power Will Ford Focus RS Have?

While 315 horsepower and 320lb-ft of torque will make the new Ford Focus RS the most powerful high performance sport compact sold in America, we have to wonder just how hot Ford will make this new hatchback. Recently, we have seen a great many automakers playing the “at least” horsepower game for new performance models and in most cases, the actual number was quite a bit higher than the estimated figure. Based on that, we could see a Focus RS with up around 325 horsepower and 350lb-ft of torque, which would allow it to crush anything in its class while still leaving some room between the 5-door Focus and the 2015 Mustang GT.

The New York International Auto Show kicks off in early April, so in a week or so, we should know a whole lot more about the new high performance Focus RS.

In the meantime, click here for a closer look at the new Ford Focus RS from the debut back in February.