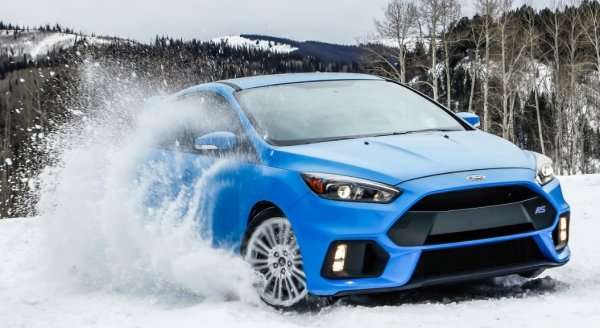 The Ford Focus RS officially went on sale in the US last summer, marking the first time that the RS name has been offered here in the States and since becoming available, Ford has sold more than 3,500 examples of the all-wheel drive, turbocharged hot hatch.
Advertisement

For many moons, there has been some variation of the Ford Focus RS sold in markets outside of North America, but starting in the summer or 2016, the Focus RS was finally available through American Ford dealerships. With 350 EcoBoost horsepower, the Focus RS is the most powerful small car ever offered by the Motor Company in the US market, with the Mustang and the GT supercar being the only other cars offered in the modern era of the automobile with more power than this ultra-hot hatch.

Even with the fact that the American sport compact market had long been waiting for the Focus RS, some critics of the high performance 5-door insisted that it wouldn’t sell well enough to justify the costs of bringing it from Europe.

Fortunately, those critics have been silenced, as Ford has sold more than 3,500 examples of the Focus RS since it went on sale last summer – leading to a monthly sales volume averaging better than 500 units per month over the course of the first 7 months of sales. Based on the average of 500 per month, Ford sold around 2,500 Focus RS hatchbacks by the end of 2016. For comparison, General Motors sold 3,013 examples of the Chevrolet SS sport sedan during all of 2016.

“Sales momentum for the Focus RS has been incredible in the U.S. for the first six months,” said Jessica Bishop, Focus marketing manager, Ford North America. “Uniquely for a performance vehicle, we haven’t seen any sales decline during the winter months, but rather customer interest has picked up thanks to AWD availability.”

Focus RS Sales Facts
In addition to a rough number of Focus RS hatchbacks sold since last summer, the Motor Company offered up a few other statistics on the early sales of this AWD turbocharged monster.

First up, the Ford Focus RS has proven to be most popular in California, with 627 examples of the hot hatch sold there. Michigan was next in line with 256 units sold, Texas was third with 244 units sold, Florida was fifth with 230 and Pennsylvania was fifth in Focus RS sales with 192 units sold. Those five states account for a total of 1,549 examples of the Focus RS, or about 44% of Focus RS sales thus far. The geographic popularity is interesting, as we see some people buying the car purely for its performance capabilities in warm, snow-free regions like California, Texas and Florida while buyers in Michigan and Pennsylvania are likely interested in the performance and the ability to handle snowy roads.

Next, while some critics scoffed at the $36k base price, it seems as though cost hasn’t been much of a concern for Focus RS buyers. The average transaction price for the Focus RS so far is $42,351, so on average, buyers are tacking on more than $6,000 in options on top of that $36k base price.

Speaking of options, the RS2 package for the Ford Focus RS has proven to be one of the most popular upgrades, with 62% of buyers checking this box. For $2,785, US Focus RS buyers get leather trimmed Recaro seats with 8-way power adjustment on the driver’s seat, heated exterior mirrors, heated front seats, a heated steering wheel and Ford’s Voice Activated Navigation system.

Finally, Ford points out that Stealth Gray is the most-popular color among American Focus RS buyers, with 32% picking this incognito hue. Nitrous Blue (shown above) is second with a 30% take rate, Shadow Black was third with 20% and Frozen White was fourth with an 18% take rate.

Naj sumar wrote on March 14, 2017 - 10:59pm Permalink
I love ford cars driving since 1960. Ford uk Germany Australia and now USA. Thanks Ford
Mike wrote on March 31, 2017 - 1:32am Permalink
LoL, the RS is now suffering major problems, getting epworse mpg's than the Mustang V8, not making nearly the advertised power, because it's rated on 93 fuel, no other manufacturer does that. And, blocks breaking. As of last week, there are: 800 plays RS' on dealer lots nation wide. People that buy these are not tacking on 6k in options, it's dealers over loading these cars with equipment, and marking them upto $47-55k... These cars are not worth a penny over $40k fully loaded. Same for the mustang 2.3.... Direct injection "without" port injection, is a bad thing. Ford better wake up and fix things and not be in such a hurry to beat the other manufacturers to market with products not throughly tested.
John Parsons wrote on May 11, 2017 - 3:59pm Permalink
What a car "is worth" is not up to you. It's up to the market. And if the article is correct, the market seems to be disagreeing with you. With a vengeance. I drive an RS...and like all high performance small displacement vehicles, your mileage is susceptible to just how hard/often you press the go pedal. I get 26 mpg on the highway without trying. That's above the EPA estimate. If I'm having fun....21 mpg. Friends tell me it goes as low as 7-8 mpg on the track. It's the nature of advanced high-pro 4 pots. I've had mine for nearly a year....not one issue. None. Every car model has some problems, and radically new designs sometimes have more....but the RS is not in anyway unusually probe to problems. The number of major engine problems reported across all the enthusiast forums can be counted on your fingers and toes. So don't try spreading rumors that the RS is "suffering major problems". It's just not statistically factual.
CJ wrote on March 31, 2017 - 9:19am Permalink
Love this car, but I can't help thinking there are others like me who can afford an RS and desire this level of AWD performance from Ford, but would rather drive something a hair more stealthy looking. I realize the whole idea of the RS is "roadgoing rallycrosser", just wishing there was a separate version of the RS with same mechanical goodness, less the boy-racer look. Not counting the Fusion Sport, which seems merely "higher" performance rather than "high performance", the only other alternative at Ford for AWD high performance is the dinosaur-like Taurus SHO (which incidentally, also belongs on your short list of modern-era fords with more power than the RS). Hey Ford, what say you build this car with a stealthy, plain looking business suit body, like you used to do with the Fox body Mustang (GT vs. LX) and call it the Focus SHO!