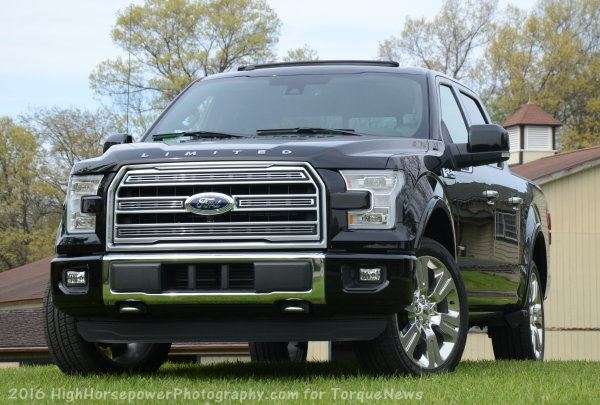 The IIHS has announced the results of their new headlight ratings test for the top trucks in the US market and the Ford F150, the Ram 1500, the Chevrolet Silverado, the Toyota Tundra and the Nissan Titan all did fairly poorly in the test – making you wonder how seriously a test can be taken when almost every vehicle in a popular segment fails the test.
Advertisement

Keep in mind that the F150, the GM trucks (Silverado and Sierra) and the Ram are the three most popular vehicles in the US in terms of annual sales. When you add in the Toyota Tundra, the Nissan Titan, the Honda Ridgeline, the Chevrolet Colorado, the GMC Sierra, the Nissan Frontier and the Toyota Tacoma, this group accounts for more units sold annually than any other individual segment, yet the IIHS believes that all of their headlights aren’t very good.

The 2017 Nissan Titan and the 2016 Ram 1500 both received an overall score of “marginal”, with all of the Titan trimlines being rated as “marginal” while seven Ram trimlines scored “marginal” and four scored “poor”.

So, the only truck to score a “good” rating is a midsized, unibody pickup while every single full size truck tested failed.

IIHS Testing of Smaller Trucks
In addition to the half-ton trucks and the midsized Ridgeline, the IIHS also tested the four popular midsized trucks, including the 2016 Chevrolet Colorado, the 2016 GMC Canyon, the 2016 Nissan Titan and the 2016-2017 Toyota Tacoma.

Every trimline of all of those trucks failed the IIHS.

A Questionable Test
It should be pointed out that the IIHS is nothing more than a company who comes up with their own tests and ratings systems, as some people seem to think that they are a government agency. In most cases, a 3rd part study like the crash test results from the IIHS are a great tool for consumers, but in the case of their headlight tests, I have to wonder what value they offer to anyone.

It would be one thing if a handful of trucks did well and the rest struggled, as it would show that some trucks need to catch up to the competitors, but in this test, even the “highest scoring” truck still received a “poor” score in most of its forms. In fact, the IIHS states that if headlights offer too much glare to other cars on the road, they cannot score higher than “marginal”, which I find to be absolutely absurd.

When the best vehicle in a test fails most of the portions of the test, that test isn’t doing a good job of rating the current industry.

David Langseth wrote on October 27, 2016 - 12:29am Permalink
I think the basic thesis of this article is absurd, and I am surprised it passed the editor's scrutiny. Imagine if we had tested occupant safety in the days before most vehicles had seat belts, though one vehicle in the test, a low volume vehicle, did have seat belts and performed better than the others. Then imagine someone wrote an article about these tests saying the occupant safety standards were clearly flawed because the top selling vehicles did poorly. With our knowledge today, we would say that was absurd. The poor performance on these lighting tests should be a wake-up call to the industry many lighting systems need improvement, not a basis to defend the generally poor lighting on many vehicles.
Bill mee wrote on October 27, 2016 - 6:30am Permalink
Great to see this brought up. This is a totally valid test and exceptional point of vehicle safety!,! First I have noticed my 2015 f150 headlights to be less effective than my 2006 crv. But that is my opinion. I drive rural roads frequently at night and make a point of dimming my interior lighting to maximize highway view. This allows my pupils to open more improving night vision. But more on topic... There is a trend to leveling popular pickup trucks. This dramatically raises the headlight aiming and on some occasions I find little to no difference in oncoming traffic headlights between their brights and dims. Trucks are designed to carry loads so their lights are aimed a bit lower overall than cars to accommodate these changes in angles when loaded. A leveled truck w a heavy load is very poorly aimed indeed. On a related note. I have found substantial side glare creeping in usually on newer suv's w led systems. Some manufactures such as fca have their drl systems just set to high beams which is a big annoyance during the day. Others have the worlds brightest led taillight which make you squint when behind at night, a detriment to safety of the following drivers night vision. Vision is the most important aspect of driver safety. With modern trends on vehicle designs dropping rooflines putting rear view mirrors in the line of forward vision. Mirror placement on mustangs and Camaro's is absurd. Final point is overall vision and night vision being of placed second to driver and oncoming driver safety for sake of looks and styling!
Bill mee wrote on October 27, 2016 - 6:39am Permalink
This is a subject I feel. Rey strongly about. When I first got my 15 f150 I hated the auto dimming rear view mirror. It's designed for urban city living where light pollution is abundant. A trailing vehicles lighting doesn't bother you that much. But in rural settings where the roads essentially have no lighting. Trailing vehicles lights are blaringly bright. I. Found it strange that ford couldn't provide mirror dimming adjustment similar to dash lighting. Installation of a truck cap w an additional tinted window to see through has made it acceptable. Further disappointed that the auto on feature of the vehicles headlight system couldn't gradually transition interior lighting to night mode. It's frustrating to backup your vehicle in a cloudy dusky situation (under a shaded tree or from the garage) and have the backup camera essentially go black when it switches to full night.
CG wrote on December 2, 2016 - 6:22pm Permalink
I guess the small overlap front crash test was also ridiculous when first introduced since most vehicles failed that the first time around.