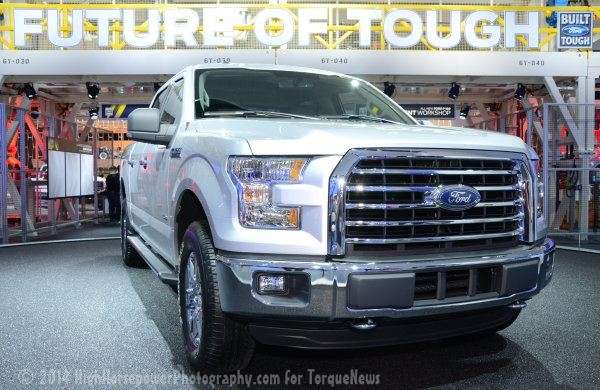 This past Saturday, the very last 2014 Ford F150 pickup rolled off of the assembly line at the Dearborn Truck Plant and with production halted, the crews responsible for preparing the plant to build the new aluminum bodied 2015 F150 scramble to get the line back in action as quickly as possible.
Advertisement

Every year around this time, pretty much every automobile assembly plant in the USA halts production to prepare for the start of production for the following year, but with the 2015 Ford F150, there is an extraordinarily high number of changes needed. Not only is the 2015 F150 all new – thus requiring new tooling for many components – but the new aluminum body requires the vast majority of the robots that build those trucks to be replaced.

The End of an Era
On Saturday, the very last 2014 Ford F150 rolled off of the Deraborn Truck Plant line while a crew of workers followed the final truck – literally tearing down the line behind the final F150 from the current generation. During the 12th generation of the F150, which started with the 2009 model year and ends with the 2014 model year, the F Series saw monster sales that are only expected to improve with the next generation of the F150 for 2015.

What makes the end of production for the 2014 Ford F150 so unusual is the haste with which the crew is actively tearing down the assembly line as production ends. The Ford F Series has been America’s bestselling vehicle for almost 4 decades and the F150 is a major part of that success. In fact, the F150 is selling so well that Ford didn’t want to stop production as they normally would so rather than having the normal period of production downtime to prepare the Dearborn Truck Plant to produce the 2015 F150; the plant continued building trucks while the crew upfitted the plant around the working assembly lines.

Now that production has ended, the crews will work to rip out all of the machinery and robots that built the steel bodied 2014 F150 to make room for the special machinery needed to assemble the new aluminum bodies of the 2015 F150. The crews have until September 22nd to finish the work so that production of the 2015 F150 can commence as scheduled.

Major Changes Needed to Build the 2015 F150
The key issue for Ford in making the body of the 2015 Ford F150 out of aluminum is that nearly every aspect of working with aluminum differs from working with steel. The machinery that handles the aluminum body panels of the new F150 are unique to the new F150 and things as simple as the means of fastening the body to the chassis has to be handled differently. For instance, where some steel panels would have been welded together, the similar aluminum panels will be glued together with a strong composite glue. Just to be clear, gluing a vehicle together isn’t a new process – but the long list of unique challenges to building the 2015 F150 out of aluminum including things like holding the panels together, preparing them for paint, etc.

Because of the unique nature of 2015 Ford F150 production process, there are more changes needed than normal and that would lead to generally lead to a longer period of downtime. However, with Ford selling the F150 at such an astonishing rate, the company is doing everything in their power to keep the production stoppage as short as possible.

terry will wrote on October 22, 2014 - 8:58am Permalink
I worked on the new line at comau after seeing the hacked job built i see why its not in production. Frist day on the job found out they mounted all the transforms on the wrong side of the line. Management didn't even care. Top it off the electrical leader had the workers leave off the seal rings on the 480v so they could put the bushing on the in side. I brought it up to him tom harmon and got laid off. Good luck tesla