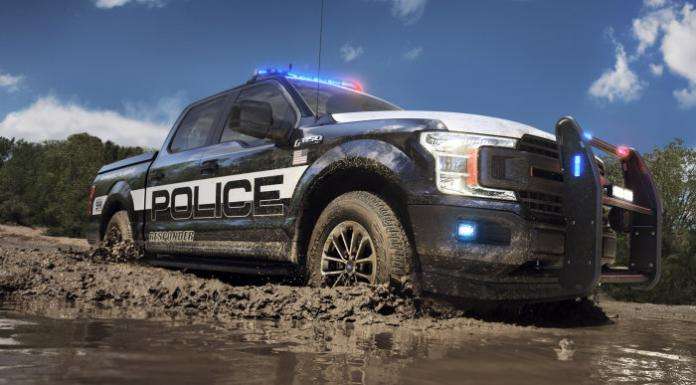 Ford Motor Company has expanded their police-ready offerings with the new Ford F150 Police Responder, which is the first pursuit-rated pickup from the Blue Oval – joining the Taurus Interceptor, the Explorer Interceptor and the Fusion Hybrid Police Responder in Ford’s fleet of high speed service vehicles.
Advertisement

Ford Motor Company has long been the leader in the American police fleet segment, but today, the first pursuit-rated Ford F150 pickup was announced. Mind you, this is not the first Ford F150 police vehicle, as the company has long offered a special service package for their half ton trucks, but the 2018 F150 Police Responder is the first Ford pickup which is built for high speed pursuit – while also being the first Ford pursuit vehicle which will be able to chase lawbreakers across rough terrain.

The result of the new Ford F150 Police Responder modifications is a truck that will accelerate as quickly as almost any pickup sold in America while reaching speeds of 100 miles per hour, all while braking confidently without any concern of brake fade during a long chase. Also, the beefed up charging system helps keep all of the added electrical gadgets running smoothly during the chase and thanks to the FX4 package, if the chase goes off road – this new F150 is the only police vehicle on sale today which will be able to continue the chase with confidence in the roughest conditions.

Armen Hareyan wrote on July 20, 2017 - 3:21pm Permalink
Interesting why only up to 100mph when that truck is capable of well beyond that?