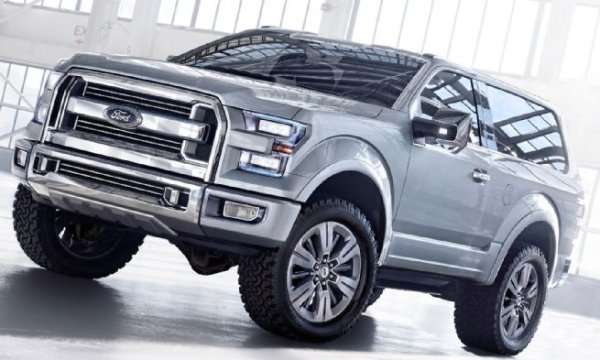 This Ford F150 Based Bronco isn't a Real Thing

Over the past week or so, there has been a great many people writing in to ask if the 2016 Ford Bronco shown above is actually coming to market and while this F150-based SUV looks awesome, I’m unfortunately writing this piece to point out that the Bronco shown here is nothing but an April Fool’s Day joke that has been continuously drudged up by disreputable automotive sites.
Advertisement

There is a reason that I really don’t like April Fool’s Day news reports, as they do nothing but confuse people who are too dense to catch the joke, so when FourWheeler Magazine announced last April 1st that the vehicle shown above would be introduced as the 2016 Ford Bronco, I could only shake my head. The piece was fun and the picture that the magazine painted as a pretty one, but even after they changed the beginning of the online article to explain that it was nothing but an April Fool’s Day joke, people keep on believing that it is real.

Low Rent Websites Fabricating News
The main problem is that there are a handful of automotive news websites that make a habit of publishing news stories that are totally fake and for these low rent websites, continually making up information about the 2016 Ford Bronco is a way of life. Some of them insist that the image above is real and they (the writers at these low quality websites) even claim to have spoken with people at Ford who have confirmed that the vehicle shown above it real. These websites regularly link back and forth to each other, basically using each other as their source for information that has somehow eluded all of the large, reputable automotive news sources.

Unfortunately, we have to keep coming back to the initial article, which was written very clearly as an April Fool’s Day joke so unless the joke was on Ford and that magazine unveiled the new F150-based Bronco two years ahead of time – the vehicle above just isn’t a real thing.

The other problem is that Ford Motor Company recently trademarked the term Bronco, which gave the fake-news websites a leg to stand on when making up their latest bit of nonsense about the 2016 Ford Bronco. While most sources were quick to point out that automakers routinely trademark names so that other companies cannot use them, the junk news sites used that trademark filing as proof that the F150-based SUV shown above was coming to market.

However, Ford representatives have stated time and time again that the Bronco shown above in silver with the exterior styling of the 2015 F150 simply isn’t in the works.

There Could be a Smaller Bronco Coming
While the likelihood of a new 2016 Ford Bronco based on the current F150 similar to the rendering above is almost nonexistent, there have long been rumors that the Motor Company has been considering a new Bronco – but these rumors indicate that it would be a modern take on the Bronco II. These rumors suggest that the future Ford Bronco would be a smaller SUV that would be built to compete with the likes of the Jeep Renegade or perhaps even the Jeep Wrangler. Small SUVs are hot items right now and while Ford has some of the bestselling smaller SUVs with the Edge and Escape, those vehicles are both strictly on-road performers. Those prospective SUV buyers who want the ability to tackle rough roads and even rougher off-road trails aren’t likely to favor the Escape or Edge, but a new Bronco sized similarly to the Escape might help Ford to better compete with Jeep.

In the mid-1980s, the Ford Bronco II was introduced as a rough and rugged little SUV that would offer comparable off-roading capabilities as the larger Bronco, but with a smaller footprint, smaller price and better fuel economy. Were Ford to roll out a new Bronco that shares a platform with the Escape, but has unique styling and a much higher riding stance, this vehicle wouldn’t compete for the attention of the average Escape buyer while still helping Ford cut into Jeep’s massive lead in the SUV segment.

Unfortunately, the possibilities of a new Ford Bronco II to compete with the smaller Jeeps is purely conjecture and in the end, the sad point of my article is that the F150-based Ford Bronco shown above isn’t real.

Parks McCants wrote on March 13, 2015 - 2:47pm Permalink
Well, I'm one of those past Bronco owners and off-road racers that would welcome a new offering to the market. The image above, real or not, is inspiring. Thanks for the read.
Steve Childs wrote on March 15, 2015 - 7:11pm Permalink
I think ford watch gm and there hummer take a fall so you will not see a new bronco
Staaaaan wrote on March 18, 2015 - 5:48pm Permalink
Bronco II? What are you talking about? The original Bronco was small, we don't have to use the Bronco II as a reference point. The original Bronco was and is loved and raced Baja style. Forget the II.