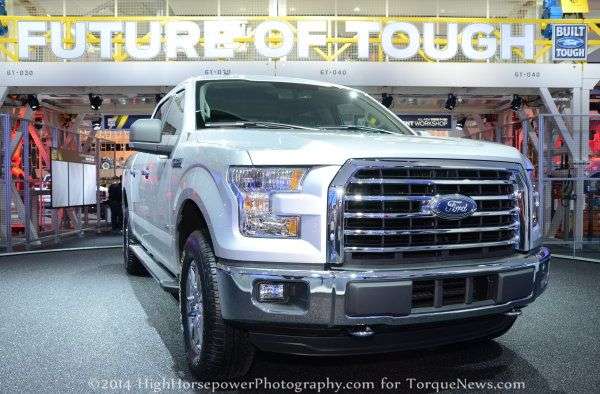 The Kogod School of Business has conducted a study of “how American” the vehicles sold in America really are and the Ford F Series pickup and the Chevrolet Corvette – two vehicles which are American icons – finishing tied for the top spot in this new report.
Advertisement

While many Americans quickly peg models like the Ford F150 and the Chevrolet Corvette as the most recognizable American-made vehicles, marketing games played by foreign automakers in recent years have allowed cars from foreign automakers to stake their claim as the most American cars. Every vehicle sold in the United States is rated by the American Automotive Labeling Act (AALA) with a percentage of American content, but the folks at the Kogod School of Business in Washington DC saw a few problems with that system to they developed their own study that more accurately shows how which vehicles impact the US economy the most. While some cars like the Toyota Camry and the Honda Accord try to make claims about being American vehicles based on their build location, this new study goes much deeper into the both the vehicles in question and the company that sells those vehicles to determine which vehicles truly contribute most to the American economy. Not surpisingly, Ford and General Motors dominated the study with the bestselling Ford F Series and the iconic Chevrolet Corvette claiming the top spots in the new study.

The American Automotive Labeling Act (AALA) has three major flaws, according to the folks at the Kogod School of Business. First, the AALA groups together US and Canada so anything that is built in Canada or components which come from Canada are considered American. Second, automakers are permitted to round up from 70% to 100% when appropriate on considering local content. Finally, the AALA doesn’t differentiate between different forms of a certain model so if the vast majority of a given car is made in America while another package is made overseas – the AALA allows automakers to look past those non-American made models to improve their American made rating.

The Kogod School of Business goes much more in depth with their report, looking at not only where the vehicles are produced and where the drivetrains are produced, but other factors including where the various headquarters are located, where the research and development for each vehicle is performed and where the other portions of the vehicle are acquired. The full list of criteria is listed below.
1. Profit Margin (6 percent)
2. Labor Costs (6 percent)
3. Location of Research & Development activities (6 percent)
4. Inventory, Capital and Other Expenses (11 percent)
5. Engine production (14 percent)
6. Transmission production (7 percent)
7. Body, Chassis and Electrical Components production (50 percent)

You read that right – with 21 cars making up the top 5 positions, only 3 of those models are not made by General Motors. The highest ranking Chrysler Group product is the Dodge Avenger in 6th place with 82 points while the highest ranking Japanese company is a five way tie for 11th between the Honda Ridgeline, the Honda Odyssey, the Honda Crosstour, the Toyota Camry and the Toyota Tundra. The highest ranked Korean vehicle is the Hyundai Santa Fe Sport in 26th place while the highest ranked European vehicle is the Volkswagen Routan minivan – which is literally a Dodge Grand Caravan rebadged for VW use. For comparison, the Dodge Grand Caravan was 31st while the Chrysler Town & Country ranked 34th. The highest rank European vehicle that isnt built by an American automaker is the Mercedes Benz GL-Class in 48th place.

Some other interesting vehicles on the Kogod School of Business American made vehicle index are the Tesla Model S at 13th (77.5 points), the Jeep Grand Cherokee in 15th (75.5 points), the SRT Viper in 17th (74.5 points) and the Chevrolet Silverado/GMC Sierra at 22nd (70 points).

In a closer look at the most popular enthusiast segments in America, Ford Motor Company reigns supreme. The F Series obviously won the battle over the Silverado (mentioned above) and the Ram 1500, which ranked 33rd with just 63 points. The Ford Mustang is in 5th place with 82.5 while the Camaro sits 25th with 68 points and the Dodge Challenger is 39th with 59.5 points – although it should be noted that both the Camaro and Challenger are built in Canada. The most American electric driven vehicle is the aforementioned Tesla Model S in 13th, followed by the Ford Focus Electric in 19th, the Chevy Volt in 30th, the Toyota RAV4 Electric in 49th and the Nissan Leaf in 53rd place.

You can check out the entire list by clicking here.

Tim wrote on April 11, 2014 - 3:47pm Permalink
What does profit margin have to do with most American car? Also, based on their criteria, I would completely expect the Big 3 to rank high. Why? Giving them credit for R&D facilities and capital expenses means they HAD to score high. That criteria is great and all, but I'm not buying it completely. Don't get me wrong, I'm a fan of the F-150 and I think it should be one of THE top American built trucks, I just don't care for how they came to that assessment.
Patrick Rall wrote on April 14, 2014 - 4:40pm Permalink
Considering how many foreign automakers have R&D facilities here in the US, I dont think that it is as slanted as you do. Many of the cars build here and sold here - even those from companies based outside of the US - have been developed on American soil.
John Goreham wrote on April 11, 2014 - 4:03pm Permalink
Looking at the list I find it more remarkable that the Toyota Tundra is ranked as more American than the Chevy Silverado and Ram 1500. The Camaro did pretty good for vehicle built in Canada.