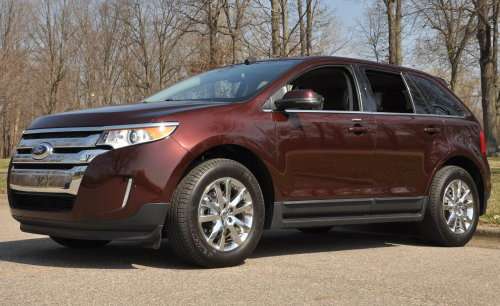 The biggest complaint with most sport utility vehicles is that many of them offer poor fuel economy and those models that do offer impressive MPGs often do so by skimping elsewhere but with the Ford Edge Limited fitted with the 2.0L EcoBoost 4-cylinder – SUV drivers can have great fuel economy and gobs of modern amenities in a luxurious setting.
Advertisement

The Exterior
On the outside, the Ford Edge Limited fitted with the EcoBoost engine looks identical to the rest of the current Edge lineup with just the subtle EcoBoost badge on the rear liftgate being the only thing that indicates that this vehicle is fitted with the fuel sipping, turbocharged engine.

Up front, the Ford Edge Limited features a big, bold chrome grille sporting the familiar three-bar design that flows into the sharpened, angular headlights. The Edge logo appears on the inner corner of each headlight housing with projection housings mounted out towards the amber corner marker lens and a thin chrome strip runs across the top of the headlights and grille – separating the prominent brow of the hood. Along the lower portion of the front fascia, the Edge wears a set of LED driving lights that run top-to-bottom with a large opening in the middle to allow for gobs of air to hit the radiator and the intercooler.

The long, flat hood of the Ford Edge Limited EcoBoost leads back to an aerodynamic windscreen that begins the long greenhouse area. The side pillars are finished in black to give the side windows a sporty, seamless look while the wheel openings use a flatted edge to bolster the sporty attitude of the new Edge. The wheel openings are nicely filled by the 18”10-spoke chrome wheels while flat black plastic running along the entire lower portion of the vehicle – from front to rear – contrasts with the body color.

Out back of the Ford Edge Limited EcoBoost, the high rear end and integrated spoiler continues the sporty look with help from the polished dual exhaust tips. There is far less chrome on the back end than out front, with the only chrome being the strip running along the top of the license plate area and the large Ford blue oval is embedded in the middle of this chrome appliqué.

The Ford Edge Limited EcoBoost exterior design does a great job of keeping the “sport” in SUV while also offering styling cues all around that bolster the luxury expectations of the Limited trimline. The Edge has a fairly small footprint with a relatively small silhouette but it is very clear that the Edge is all sport utility vehicle – with this sharp new exterior helping Ford Motor Company build on the success of the first generation Edge.

The Interior
The Limited trimline is the top of the line package for the Ford Edge with the EcoBoost engine with the only package ranking “above” the Limited being the Sport package but that premium package is only offered with the naturally aspirated 3.7L V6. In short, the Edge Limited is the top luxury package for the midsized SUV and the second that you climb into the Edge – luxury is a very clear theme. My test vehicle was equipped with the Sienna Leather package which adds dark brown leather to the front and rear seating surfaces, the center console armrest and the door panel armrests with black leather found on the sides of the seat, across the dash and throughout the interior. This two-tone layout gives the Edge Limited a look that inspires a “wow” out of most people who are climbing in for the first time. In addition to looking great, the front seats provide a comfortable setting for long rides while the deep upper bolsters keep the driver and front passenger centered in the seats during spirited driving. In the rear seating area, there is comfortable room for two adults with a center armrest but if you have the need for a third seating position in the back, a smaller person (like a child) can fit in the center rear seat – but I wouldn’t try putting a larger adult there.

Across the dash, the Ford Edge Limited EcoBoost continues the luxury layout with a taste of high tech tastiness. The gauge cluster carries one large traditional gauge in the middle showing the vehicle speed and the gear selector and that speedometer is flanked on each side by a customizable screen. On the left side, the driver can toggle through a variety of vehicle information including fuel economy figures, trip mileage, engine RPM and other system information. On the right side screen, the driver can opt to have a navigation or sound system readout depending on what is most important at the time. These two configurable screens are controlled by a pair of directional buttons – one mounted on each side of the steering wheel – and this gauge cluster works with the integrated Ford Sync system. The Sync system adds a large touch screen mounted high on the center stack with access to the Phone, Navigation, Entertainment and Climate controls with additional controls for the sound system and the climate control mounted below the screen in a gloss black panel with help from Sony. The Sync system has been criticized for its complexities but I found that with a little patience, the Sync system is far easier than many make it out to be with voice activated navigation that allows you to find locations without taking your hands off of the steering wheel. Not only does this system look great but the Sony sound system should put a smile on the face of most audiophiles. The upper and lower portions of the dash are finished in black while a wood grain panel runs across the passenger side and on both sides of the driver’s information center.

The Ford Edge Limited offers tons of elbow room and leg room for the driver, front passenger and rear passengers but it also packs tons of cargo space in the rear storage area. The rear cargo area easily accommodates four full sized hockey bags when piled on top of each other (two bags when single layered) and if you need more space for cargo and less space for passengers – the rear seats quickly fold down for additional storage and cargo room. The rear seats are controlled by a set of buttons conveniently mounted just inside of the rear door. There are also plenty of little nooks in which to store things including the roomy center console, the glove box, the area under the center stack and the door panels – front and rear.

The Drive
The key feature of our Ford Edge Limited test vehicle is the 2.0L EcoBoost engine that uses force induction technology to make 240 horsepower and 270lb-ft of torque while also offering 21 miles per gallon around town, 30mpg on the highway and a combined figure of 24mpg. Unlike some fuel friendly SUVs that require you to drive like you are never, ever in a hurry to reach the government fuel economy figures, I found that you can drive the Edge EcoBoost hard and still easily average better than 24 miles per gallon over the course of a tank of gas when splitting between city and highway driving. Also, I found that when cruising on the highway, the Edge EcoBoost is very capable of offering better than 30mpg. During my time in the EcoBoost’d Edge Limited, I averaged 25.6 miles per gallon and that is when driving the Edge to get the most power out of the 2.0L EcoBoost.

Fuel economy is important but it is useless if the vehicle is grossly underpowered – a problem that the Ford Edge Limited EcoBoost does not have. 240 horsepower and 270lb-ft of torque is more than enough power to allow the Edge to keep up with fast moving highway traffic while packing enough low end grunt to spin the tires and hustle right up to the speed limit (and well beyond). Some skeptics worry that the dreaded “turbo lag” will affect the low end performance of the EcoBoost’d Edge but even when launching from idle, the 2.0L EcoBoost is quick to send power to the wheels seemingly as quickly as any 4-cylinder engine on the market. 30 miles per gallon on the highway (and better than a 25mpg average) is impressive but it is vastly more impressive that the Ford Edge Limited can hit those figures without sucking the fun out of driving.

Around town and on the open road, the Ford Edge Limited with the EcoBoost engine and front-wheel drive system handles confidently without compromising ride quality. Very little of the road noise transfers through to the cabin, making for a pleasantly quiet interior even when cruising down a rough Detroit highway at 70 miles per hour. Steering response is quick and sporty but more importantly – the steering system helps to further the comfortable qualities with little of the roughness of the road traveling through the steering column to the driver.

The Final Word
The EcoBoost 4-cylinder engine option is only available with a front wheel drive layout for the Ford Edge so this vehicle might not be ideal for someone who relies on four wheel drive to get around but for someone who wants a roomy SUV that is packed full of amenities, offers tons of seating and storage space, packs lots of power and still offers a very realistic figure of 30 miles per gallon – the Edge Limited with EcoBoost is a great package. This model leaves very little to ask for throughout the interior and the sharp exterior design combines fuel-saving aerodynamics with great looks.