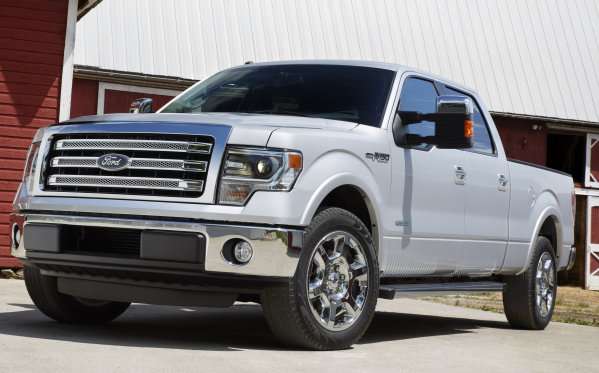 Ford Motor Company has issued a pair of recalls for the 2014 F150 pickup – one pertaining to the function of the rear brake lights and a second that focuses on the passenger’s side airbag system – both of which pose some risk to the occupants of the truck and others on the road around them.
Advertisement

This is the era of the recall and with millions of vehicles being recalled each year for things as simple as an incorrectly spelled information sticker under the hood, these new 2014 Ford F150 recalls should be taken a bit more seriously. Although Ford is not aware of any accidents or injuries stemming from either of these two issues, one of them could greatly increase the likelihood of injury in the event of an accident while the other increases the likelihood of getting in to an accident.

2014 Ford F150 Brake Light Recall
The first and smaller of the two new 2014 Ford F150 recalls focuses on a problem with the brake pedal position switch. This switch is what allows the brake lights to illuminate when the brake pedal is depressed, but it seems that there is a relatively small batch of 2014 F150 pickups have had their brake pedal position switch may have been incorrectly calibrated. If the switch is not adjusted properly, the brake lights could either fail to light up when you first begin braking, or they might not light up at all. Of course, not having your brake lights light up when you are slowing down could cause a vehicle behind you to run into your F150 when the other driver doesn’t realize that you are braking.

The fix for this F150 recall is as simple as the technician adjusting the brake pedal position switch.

2014 Ford F150 Passenger Airbag Recall
The second and much larger 2014 Ford F150 recall has been announced due to a possible problem with the front seat passenger seat sensor. This is the sensor that tells the safety restraint system whether or not to open the passenger side airbag in the event of an accident and, unfortunately, this sensor may not be working correctly in 134,947 Ford F150 trucks and Ford Flex SUVs from the 2014 model year. Should this sensor not be working correctly, the airbag may not deploy when there is an adult seated in the front passenger position and that creates an obviously elevated risk of injury in a crash.

The fix for this problem is also simple, with the technician adjusting the seat tracks and recalibrating the seat sensor.

For more information on either of these 2014 Ford F150 recalls, contact your local Ford dealership.

jimmy rodriguez wrote on December 31, 2015 - 1:52am Permalink
what are the recall for 2014 f-150 XLT
Bruce Armstrong wrote on March 6, 2016 - 8:19pm Permalink
My 14 F150 XLT super crew was built in Kansas, having alot of problems.. What are the vin #'s of the recall vehicles? Thanks Bruce. Armstrong Construction Pickering
Ken axton wrote on June 3, 2016 - 7:37am Permalink
I have a 2014 f150 xlt super cab my airbag light came on called dealer they say my truck is not one of the recalled trucks don't understand if they are having airbag issues and my light is on think it should be covered not happy right now
Tim Moriarty wrote on July 22, 2016 - 5:51pm Permalink
My 2014 F150 had a brake failure on 7/15/16. Long story short, it happened during peak rush hr traffic. The master cylinder gave out, fortunately I was in a parking lot and was able to stop the truck. If I had made it into traffic it could have been fatal! Ford has shown no concern over that possibility! I'm without my truck for a week so far and ford still cannot give me an answer as to when my truck will be repaired. When I was growing up, Ford was known as a vehicle you could depend on. What happened? I'm without and they (Corp), are riding around in hired car services. I'll probably have that in mind when I purchase my next vehicle! They did not exhibit any concern about someone possibly getting injured or killed! I know now exactly what I'm dealing with!!! PS, I got the recall notice three days after the brake failure!