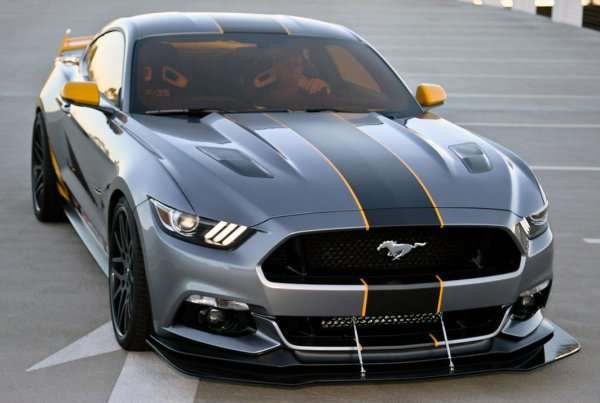 Ford Motor Company has once again worked with the Experimental Aircraft Association AirVenture to create a customized 2015 Ford Mustang GT that will be auctioned off to raise money for the group’s Young Eagles program – while also showing off some design cues that make this the coolest looking S550 Mustang I have seen thus far.
Advertisement

Ford Motor Company has a longstanding partnership with the Experimental Aircraft Association, frequently supporting their annual AirVenture event, and for the 2014 event Ford has offered up a beautifully customized 2015 Ford Mustang GT to help raise money for the EEA Young Eagles charity. In addition to helping to raise money for a good cause, this F35 fight jet inspired S550 Mustang offers us an early look at some of the accessory items – or components of future models – that could grace the next generation Mustang.

The F35 Lightning II Edition 2015 Ford Mustang GT
The 2015 Ford Mustang is a very big deal in the performance world and until the 2015 Dodge Challenger SRT Hellcat stole some of the attention, the next generation Mustang has been one of the most popular topics in the automotive world since debuting last December. For the 2014 Experimental Aircraft Association (EAA) AirVenture Oshkosh 2014 – billed as the World’s Greatest Aviation Celebration – Ford has decked out a 2015 Mustang GT with inspiration from the Lockheed Martin F35 Lightning II fighter jet. The most noticeable feature of this customized 2015 Mustang GT is the stunning paint scheme with a similar black and yellow logo wrapping around the tail of the car to what is found on the tail of the F35 fighter jet and a matte stripe running down the middle of the car. This paint scheme alone would make this 2015 Mustang GT stand out in any crowd, but Ford wanted to take this custom build one step further – adding a massive front splitter up front, 21 inch Forgiato wheels over a big brake package along the side and a lower rear diffuser along with a large rear wing out back. Add in the yellow tinted windows, the yellow mirror caps, the yellow brakes calipers and the other unique trim around the outside of the car and you have what I believe is the best looking 2015 Mustang I have seen thus far. While the huge F35 inspired livery on the rear quarter panels might be a little much for some people, I absolutely love the fighter jet inspired design of this car from front to rear. The awesomeness of this 2015 Ford Mustang GT doesn’t stop on the outside, though, as the Motor Company has added uniquely decorated Recaro race seats, unique floormats, embroidered F35 logos in the door panels and a black/yellow color scheme that is spread throughout the cockpit.

The 7th EAA Inspired Ford Mustang
With the introduction of the Lockheed Martin F35 Lightning II inspired 2015 Ford Mustang GT, the Motor Company has now worked with the group for seven years and in doing so, they have offered up a total of 7 uniquely designed Mustangs. Below is a list of the past 6 years worth of aeronautical Mustangs, all of which have been auctioned off to help raise over $2.5 million for the Young Eagles program.

Future S550 Ford Mustang Features
While the most important aspect of this F35 inspired 2015 Ford Mustang GT is the fact that it is raising money for charity, it also shows off some very sexy features that we are almost sure to see on future Mustang models, or in the Mustang accessory catalog. Most notably, the super aggressive and adjustable carbon fiber front splitter is reminiscent of what was used on the previous generation Mustang Boss 302 Laguna Seca and this is a feature that I almost expect to see offered (if not standard) for the upcoming 2016 Shelby GT350. There is also a very aggressive rear diffuser setup that could arrive on the next Shelby as well – or it could be held for the rumored Boss or Mach 1 model in the future. Finally, that huge rear wing looks like something that Ford would offer up through the accessory catalog for the 2015 or 2016 Mustang. Ultimately, I have a hard time believing that Ford would go to the trouble to design the splitter, the rear diffuser and the rear wing strictly for a one off charity car – so my safe money says that these components will be available in the near future…whether on a production model or via an aftermarket accessory catalog.

John Goreham wrote on July 31, 2014 - 3:40pm Permalink
You realize this will continue and the next "Fighter inspired" car will drive itself and have no space for a driver.