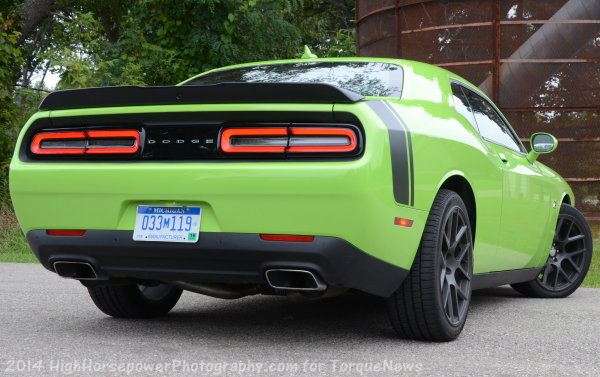 The 2015 Dodge Challenger is truly an incredible performance car, but even with the high level of impressive features, fans of the newest Mopar muscle car have found something that they don’t like – the relatively limited number of bright exterior colors.
Advertisement

The 2015 Dodge Challenger sports an exterior refresh, a beautifully revamped interior, a new Scat Pack value performance package and the mighty Hellcat packages so it is an understatement to say that the Mopar enthusiast community is pretty happy with the 2015 Challenger. However, across the various Facebook pages, enthusiast forums and in-person discussions have revealed a common issue that many people have been quick to point out.

The 2015 Dodge Challenger Color Palate
The 2015 Dodge Challenger is offered in 11 exterior colors – Billet Silver Metallic, Sublime Green, B5 Blue, TorRed, Pitch Black, Bright White, Granite Crystal, Phantom Black, Ivory White, Jazz Blue and Redline Red. So, two greys, two reds, two blues, two whites, two blacks and a green with the only bright colors being Sublime Green, TorRed and B5 Blue. Sure, the silver and white hues are bright, but with those being among the most commonly ordered colors for the average family sedan, it is tough to consider the silver and white hues to be eye catching.

On the other hand, if you look at the vintage Dodge Challenger color palate, you find far more “high impact” colors that allow the Mopar muscle car to stand out in a crowd. For instance, the 1971 Challenger was offered in 28 exterior colors and while included in that list are some colors that I could never imagine being offered on a modern muscle car (like the tan/brown options), the fans still want more options. Do they want 6 different greens or 5 different blues? No. They want the colors that Mopar fans most closely associate with their beloved muscle cars. They want Plum Crazy Purple, they want Top Banana Yellow and they want Hemi Orange.

Oddly, both Plum Crazy and Header Orange are offered for the 2015 Dodge Charger, but not for the 2015 Challenger. Along the same lines, the Charger is not currently offered in the eye catching Sublime Green and B5 Blue hues, but B5 is expected to arrival in the Charger lineup later on in the 2015 model year while Sublime is expected to soon leave the Challenger lineup as well.

Fortunately, rumors and unofficial company information suggests that there are more high impact colors coming for the 2016 Dodge Challenger.

Plum Crazy, Orange Coming Soon
There has not been any official word from Dodge about new Challenger exterior colors coming down the pipeline for late 2015 or 2016, but I have had the chance to speak with a collection of folks with Dodge dealership connections who have some insight into the future Challenger color palate. According to some regional dealership reps, the 2016 Challenger should be offered in Plum Crazy and some bright orange – be it Header Orange or Hemi Orange. These rumors suggest that Plum Crazy will be a more limited edition option that will be offered for a specific period in the 2016 model year while the orange option will become a normal production option. Both of these colors are offered for the 2015 Charger, so it shouldn’t be hard for Dodge to start painting Challengers purple or orange and with any luck – we will see the return of other high impact colors like Top Banana Yellow and something to replace the Sublime Green hue that is set to leave the lineup after the 2015 model year. Click here for more on the demise of Sublime Green.

Again, the news of Plum Crazy and Hemi Orange (or Header Orange arriving for the 2016 Dodge Challenger is far from official, but these seem to be the most likely solution of the lack of eye catching exterior colors on the Challenger.

Don wrote on December 5, 2014 - 12:34am Permalink
My scat pack is pearl white. I'm lovin it
Chip wrote on June 10, 2015 - 4:43am Permalink
Is there any way of getting the hemi Orange this year 2015 on a charger or challenger. These dealers are all for profits none of them seem to put customers happiness first. They are all nuts. Chevy won't do it either. These company's are painting other vehicles orange this year but won't paint ones that are not originally designated specifically for that color. It's a joke. I wanted an orange muscle car all my life ( now with cancer) now I cannot get my color because of these unreasonable and greed happy car companies Thanks for reading