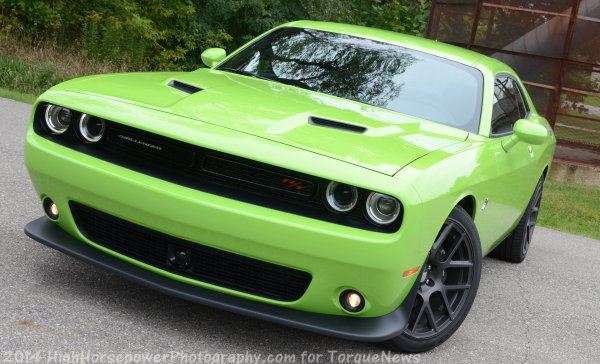 Get Your Sublime 2015 Dodge Challenger While You Can

While speaking recently with a Chrysler Group representative about the 2015 Dodge Challenger, he offered me an interesting warning to convey to my readers – if you want a 2015 Challenger Sublime Green, you had better get one as soon as you can.
Advertisement

The 2015 Dodge Challenger comes in a nice sized collection of colors and on dealership lots around the United States, it seems that the most common color for the new Mopar muscle car is the stunning bright green known as Sublime. This is one of the most eye-catching colors available in the US performance car market and through the early ordering process for both the Hellcat and non-Hellcat Challengers, Sublime has proven to be very popular. However, this color may disappear from the dealership landscape altogether and once it is gone, it might be impossible to get another factory-painted Challenger in Sublime green.

Get Your Sublime While You Can
While speaking informally with a member of the Chrysler team about the 2015 Dodge Charger about the availability of B5 Blue on the 707hp Hellcat models, he explained to me that at that time, availability for all of the colors and packages had not been decided. As our discussion came to an end and he started to walk away, he looked back over his shoulder and said “make sure that your readers who want a Sublime Challenger get them soon”.

While that may seem a little cryptic for some, that certainly makes it sound like Sublime could be a special color just for the 2015 model year Dodge Challenger. In the past, the Chrysler Group has introduced a unique green hue with the Green With Envy Challenger R/T and SRT, but a natural disaster caused a paint shortage that made those darker metallic green Mopar muscle cars even more limited than first planned. With those cars, Chrysler had planned to buy so much paint and when that paint was gone, that was the end of availability for the Green With Envy models. Chrysler has already built a ton of Sublime 2015 Challengers and if the company is working with a limited supply of the green paint, prospective buyers could be running out of time to custom order a 2015 Challenger in Sublime.

If Sublime Dies, a New High Impact Color Could Replace It
If Sublime turns out to be a one year affair for the 2015 Dodge Challenger, there is a good chance that it would be replaced with some other high impact color. Since the 2015 Challenger was introduced, Mopar diehards have complained about the lack of the dark metallic purple better known as Plum Crazy so I wouldn’t be surprised for a second to see Plum Crazy replace Sublime as the old school, high impact color for the 2016 model year. There is also no yellow or orange exterior color options for the 2015 Challenger and with orange being so popular with past SRT Challengers, I would expect to see Hemi Orange or Header Orange arrive for the Challenger in the next model year or two.