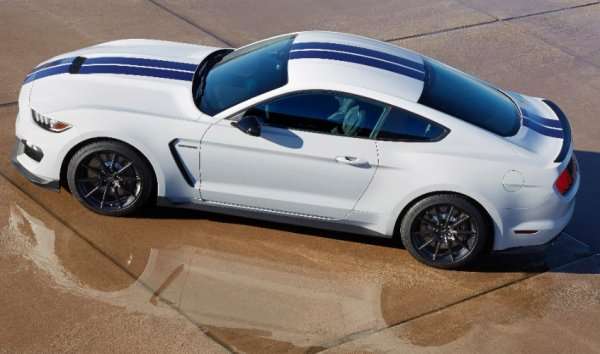 Even Hotter Shelby GT350R Mustang Rumored to Debut in Detroit

The new Ford Shelby GT350 Mustang hasn’t even rolled off of the stage at its LA Auto Show debut, but there is already a rumor that an even hotter version of the new GT350 on the way, and this new GT350R is expected to make its debut this coming January at the 2015 North American International Auto Show in Detroit.
Advertisement

The new Ford Shelby GT350 Mustang will very likely be the best handling factory production Mustang of all time. This new GT350 is expected to challenge the current Chevrolet Camaro Z/28’s title of the best handling muscle car ever, a challenge which will play out over the next year when the newest Shelby Mustang reaches owners around the country. However, if the new Shelby GT350 Mustang that is on display in LA right now proves to come up short of dethroning the Z/28, Ford isn’t going to sweat about it too much – as rumors indicate that there will be an even higher performance version of the new GT350 Mustang set to debut next January in Detroit.

The Return of the Shelby GT350R
Back in 1965, the Shelby GT350R was a race ready version of the then brand new Shelby GT350 Mustang. The GT350R package removed many of the features not needed for racing, including side windows, the heating system, the defroster, interior upholstery, the rear seat, the headliner, floor insulation, sound deadening and the rear window glass was replaced with plastic. The GT350R package added a 4-point roll bar, lightweight bucket seats, high performance brakes, high performance suspension, unique wheels wrapped in high performance tires, a heavy duty rear end and a specially tuned version of the 289 cubic inch Mustang engine that made it the most powerful option in the 1965 Mustang lineup.

The 2016 Mustang Shelby GT350R won’t be that extreme, but it will likely follow in the same basic design direction, removing what isn’t needed to go fast and adding the best components that Ford has in their arsenal. More importantly, this new GT350R could have features that are more similar to the Camaro Z/28.

What to Expect from the New GT350R
First and foremost, I expect that a new Shelby GT350R Mustang will derive its power from the same flat plane 5.2L V8 as the new GT350 and like the car on display in LA, the GT350R will pack a heavy duty manual transmission. The GT350R will also feature a high performance suspension and braking system, but rather than the steel brakes and the adaptive suspension of the GT350, the “R” model could sport carbon ceramic brakes and a suspension setup that focuses more on performance and less on ride quality.

Also like the Z/28, the GT350R should have a very minimal sound system and no air conditioning, where the recently introduced GT350 has all of the interior goodies that you get in the Mustang GT. I would also expect the GT350R to have lightweight seats with manual control and possibly a rear seat delete.

Finally, the new Mustang GT350R should have an even more aggressive aero package with features like a deep-reaching front chin spoiler, a more prominent rear diffuser and a large rear spoiler – presumably one that can be adjusted.

In addition to serving as a more appropriate challenger for the Chevrolet Camaro Z/28, the new GT350R would go a long way in stealing some of the high performance attention at the 2015 Detroit Auto Show. It is expected that GM will introduce the next generation Camaro in Detroit, and a brand new Mustang that will beat anything that GM rolls out would certainly steal some of GM’s thunder.

T Honer wrote on November 27, 2014 - 9:10am Permalink
Just wait until Ford's new muscle "killer" the Shelby GT500 appears next year to compete with the Camaro. 700HP stock, 6.2L charged engine. Book it folks.
Bjorn wrote on November 27, 2014 - 2:27pm Permalink
Beautiful car. I had a 67 and a 72. This one has me thinking about selling my Porsche.
John's Shelby GT500 wrote on November 30, 2014 - 6:12pm Permalink
This sounds like a great car! For me though, I would prefer the GT350 because I want all the comfort and options that you can get with that for a street car. I don't think I could live without air conditioning in Florida. I wouldn't want the Z28 for the same reasons.