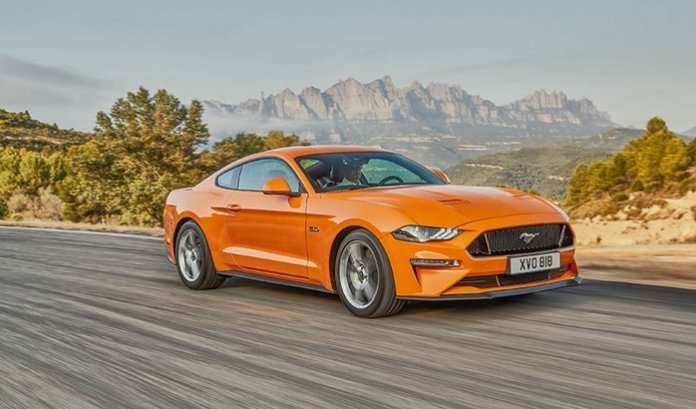 Ford Motor Company has announced the specs for the European version of the 2018 Mustang and as is the case with the new pony cars coming to the US market, Europeans will enjoy more power, a new look and improved technology for the 2018 model year – although the 4-cylinder EcoBoost sees a drop in power due to local emission requirements.
Advertisement

The 2018 Ford Mustang for the European market will receive similar upgrades and changes as the new models in the US market, including the exterior redesign, more power from the 5.0L V8, a new high tech suspension system and a new 10-speed automatic transmission which improves performance and efficiency. There will still be some unique features of the European 2018 Mustang, such as the clear taillights, but for the most part, the European 2018 Mustang will follow the same direction as the American 2018 Mustang.

2018 Ford Mustang's Exterior Redesign
First and foremost, the 2018 Ford Mustang in Europe will feature the same basic exterior changes as the cars sold in the USA. This includes the new front end, with reshaped headlights, a new grille and a new, sloping hood design as well as a more sharply angled lower front fascia.

Some Americans who don’t love the look of the 2018 Mustang insist that it is “too European” and if that proves to be true – this new look should resonate well with European buyers.

The new 10-speed automatic transmission, which was developed in conjunction with General Motors and which is featured in some way in the new Ford F150 Raptor and the new Chevrolet Camaro ZL1, improves the 2018 Mustang in every way. The numerically lower gears are more aggressive for improved acceleration and the numerically higher gears are set up for improved fuel economy, so this new gearbox improves performance and efficiency. As a side note, the 6-speed manual transmission is still standard.

The MagneRide suspension system is the other new key feature and this setup – which has been offered for a few years on the Shelby GT350 and GT350R – allows the 2018 Mustang to offer track-ready handling at the push of a button while also offering a smooth ride for the daily drive. In short, the MagneRide dampers will allow the 2018 Mustang to offer superior handling without compromising ride quality.

The only bad news for the 2018 Ford Mustang in Europe pertains to the EcoBoost models. Due to local emission regulations, Ford had to make some changes to the engine which dropped the output from 313 imperial horsepower to 268hp. That is a pretty significant decline, but Ford promises that the new, less powerful engine is actually more responsive.

So, the bottom line here is that the 2018 Ford Mustang GT for Europe will deliver 450 horsepower with the 10-speed automatic transmission, the high performance MagneRide suspension setup and the new, sleeker look – all of which will help Ford maintain the title of the world’s bestselling sporty car.