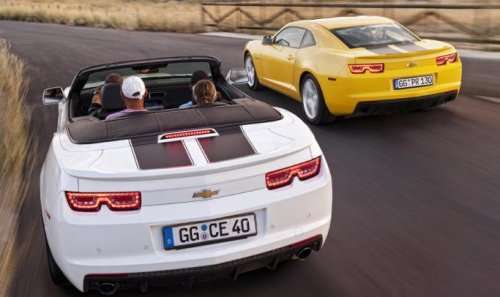 Earlier this week we took a look at the Chevrolet Camaro Coupe that would serve as the pace car for the 2012 World Touring Car Championship, featuring unique LED taillights and today we have confirmation that these taillights are standard in the European market – along with more power than is found in American Camaro models.
Advertisement

The 2012 Chevrolet Camaro models leaving the Oshawa Ontario plant en route for the European markets looks to be pretty much identical from the front and sides but across the back, the European Camaro comes with the same one-piece LED taillight design. The American Camaro features two individual lenses on each side, separated by a portion of the lower fascia but the European Camaro has a taillight design that connects the two lenses on each side – using LED technology for a sportier look with the reverse indicators integrated into the middle of the taillight lens.

American Camaros carry their backup lights on the outer corners of the lower fascia but with different restrictions on backup light locations in Europe – Euro Camaro owners get a far different rear lighting setup. Also, the SS moniker does not appear on European models since there is only one trimline offered overseas.

Unlike the American Chevy muscle car, the 2012 Chevrolet Camaro Coupes and Convertibles headed for Europe do not offer the entry level 3.6L V6 as this car is marketed as a pure American performance car –leaving no need for the less powerful yet more efficient V6. Instead, only a pair of V8 engines is available with the LS3 coming in models fitted with the manual transmission while automatic Camaros sport the L99 V8.

Compared to the official power figures for the US market, European Camaro Coupes and Convertibles get slight bumps in power with the LS3 packing 432 horsepower (426hp in the US) and the L99 offers 405hp (compared to just 400 in the US). Like American models, the L99 Camaros are fitted with Active Fuel Management in an effort to offer better fuel economy.

Owning a high performance American car can be pricey here in the US but European buyers will pay a much bigger price, with the 2012 Chevrolet Camaro Coupe carrying a starting price of £35,025.00 in the United Kingdom when equipped with a manual transmission – or roughly $55,132 US Dollars at the current exchange rate. The 2012 Chevy Camaro Convertible in the UK starts at £40,025.00 or $63,000 USD.

General Motors is locked in a muscle car battle like we have not seen since the 1970s and with the main battlefield being the roads of the good ol’ USA; both companies will likely look to benefit from foreign sales of their legendary performance cars as the two groups push for a more global vehicle lineup.