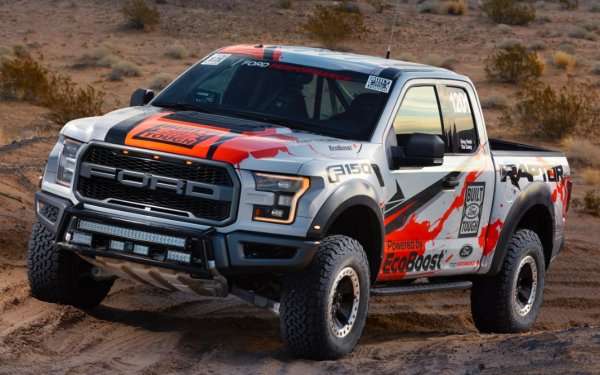 The 2017 Ford Raptor F150 made its racing debut this past weekend in the Parker 425 event of the Best in the Desert series and sadly, electrical gremlins on the second 143 mile lap prevented the new Raptor at turning in a time for the 6+ hour endurance race.
Advertisement

We brought you the news last week that the Ford was taking a “stock” 2017 Raptor F150 endurance racing in the desert and this past weekend brought about the first event for the new production truck. Unfortunately, the race didn’t go as well as the Motor Company had hoped, with electrical problems knocking the truck out of the race on the second lap.

The Parker 425
I will admit that I am new to covering the Best in the Desert series so I am still learning the ins and outs of their events, but the 2017 Ford Raptor F150 race truck was wearing the number 1201, which means that it would have run in the first race of the Parker 425 event. This 2-lap event had a collection of different classes with vehicles from Ford, Toyota, Dodge, Volkswagen, Jeep and “Custom” vehicles. The number of entries is unclear based on the series website, but 18 vehicles finished the 2-lap race.
The 2017 Ford Raptor F150 was not one of them.

Early in the race, Ford’s Mike Levine was Tweeting about the progress and things were going well during the first lap of the race for the 2017 Raptor F150. No lap times were posted, but the Raptor was around the halfway mark around noon (based on Twitter time stamps) and the truck hit the main pit near the start/finish line around 2:30pm. Based on that, we can crudely estimate that the lap took somewhere between 4-5 hours. Unfortunately, 3 hours or so into the second lap, Levine posted that the Raptor had made a stop due to some electrical troubles that they could not overcome. Due to these issues, the team wasn’t able to finish the race.

The winner of the race completed both laps in 6 hours and 26 minutes. The last vehicle to finish did so in 11 hours and 47 minutes, so there was a huge gap between the finishers. Had the Raptor kept up the pace of 4-5 hours for both laps, they would have finished in anywhere from 8-10 hours, which would have put the near-stock F150 in the middle of the racing field.

It Wasn’t the 10-Speed Transmission
When Mike Levine Tweeted during the race that the Raptor was having electrical issues, the lack of details caused rampant speculations online about what the problem could be. After the Ford GT ran into electrical-based transmission issues in the Rolex 24, it was rumored across the social networks that the new 10-speed gearbox was at the center of the Raptor’s electric issues.

The bad news is that the cause of the electrical issues is still unknown, but Mike Levine verified that this problem did not involve the 2017 Raptor’s new 10-speed automatic transmission. He said that the team is still looking into the problem, but the new gearbox is not to blame.

Really, an electrical issue – while awful for the race team – can be a best case scenario in a production vehicle. The 2017 Raptor finished the first 143 mile lap of the race in less than 5 hours without any mechanical issues. The team changed one tire, but the transmission, the new four-wheel drive system and the high performance EcoBoost V6 all stood up to the abuse for over 150 miles – only to have an electrical issue knock them out of the race.

While the anti-Ford camp will use this as a reason to knock the new Raptor, problems like this are why Ford takes the truck racing – as running it as hard as it could be run will allow them to test the new F150 under the most grueling conditions possible.

Erik wrote on April 11, 2018 - 10:28pm Permalink
Looking for OBD2 for 2017 Raptor. One that will work w/ forscan and shows electrical, busses ect. My Raptor went thru water up to top of console. No warranty.