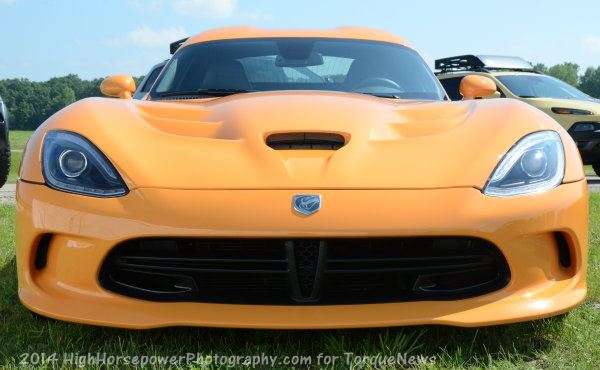 Last month we reported that the 2015 Dodge Viper would get a big price decrease that would also impact 2014 models sitting on dealership lots around the country and not surprisingly, the new lower prices have led to a spike in Viper sales – allowing the Mopar supercar to have its best sales month since being introduced for the 2013 model year.
Advertisement

The modern Dodge Viper is one of the best performing cars sold in the world and as the only true American supercar (during the downtime between the C6 Corvette ZR1 and the upcoming C7 Z06), the Chrysler Group expected it to sell well when it hit the market early last year. Unfortunately and somewhat surprisingly, the modern Viper hasn’t sold anywhere near as well as the automaker had hoped and the biggest critique is that it just plain costs too much. It does make sense as the Viper is beautiful on the outside, more luxurious than ever on the inside, easier to drive than ever thanks to the variety of high tech helpers like stability control and – most importantly – it still offers world class performance. It really had to be the pricing that was keeping people away.

New Pricing for the Dodge Viper
Even though the 2014 SRT Viper offered comparable performance to some of the far more expensive European supercars, many people felt that a Viper GTS that cost upwards of $125,000 was simply too much. Well, Chrysler listened to those critics and responded by cutting the price of the entire 2015 Dodge Viper lineup by $15,000. Click here for a closer look at the new pricing of the 2015 Dodge Viper. In addition to that, they immediately cut the price of 2014 Vipers still on lots around the country by the same amount while also extended a $15,000 voucher to those folks who paid the old pricing for the 2014 models…but would that be enough to get the Viper flying off of lots?

The answer appears to be “yes”.

Record Month for the Modern Viper
In September 2014, Chrysler Group dealerships around the United States sold 108 copies of the Dodge Viper. That total marks the best month for the modern Viper since it went on sale as part of the short-lived SRT brand in April 2013. The previous record sales months for the SRT Viper/Dodge was a tie with 97 units sold in June 2013 and then again in April 2014.

While a generational sales record is nice, the bigger story here is the quick increase in Dodge Viper sales with the new pricing. Sales of the Mopar supercar have been abysmal over the past few months with just 38 units sold in August, 48 units sold in July and 36 sold in June 2014. June was the worst month for Viper sales since the car fully hit the market last April. For those who aren’t keen on math, the three months prior to September saw a total of 120 Vipers sold so in September, the company sold just 12 less supercars than they did in the three months prior combined.

No 2015 Vipers Sold Yet
Best of all, the 2015 Dodge Vipers aren’t on sale yet, so all of these 108 units sold in September are “older” models so these numbers don’t reflect the models with the slight bump in power for 2015, nor were any of the new Gran Touring (GT) package or improved Viper Time Attack models included in last month’s sales. The 2015 Viper gets a bump of 5 horsepower while the new GT package will cater to those who want a trimline that falls between the base model and the top of the line GTS package. Finally, the 2015 Viper TA will offer better track performance for those who are looking to make the biggest splash on a closed circuit.

It is still unclear whether this price cut will be enough to get Dodge Viper sales numbers into the range that would lead to 2,000 units per year – but a record sales month in September shows that a price cut was a step in the right direction.

ih wrote on October 3, 2014 - 12:18am Permalink
It's not a price cut, it's a liquidation sale.
Mark Day wrote on October 3, 2014 - 12:41pm Permalink
There is another reason for slow sales - no automatic transmission. Vastly improved automatics, as in the Hellcat, are outperforming manuals. Chrysler chose not to devote the engineering/regulatory expense to develop an automatic.
Patrick Rall wrote on October 6, 2014 - 12:45pm Permalink
Mark, just so that you know, the sale of manually shifted Hellcat Challengers are outpacing those of automatic models by a 55/45 ratio. I agree 100% that Dodge should spend the money to put the Hellcat's automatic in the Viper and with the arrival of the automatic in the new Z06, I truly expect them to follow suit with the Viper.
Mike wrote on October 8, 2014 - 12:22pm Permalink
Thats only because early buyers are collectors. They're hoping to cash in on middle aged folks who want to relive their younger years, which for man of them were the 60's and 70's when automatics sucked. You can bet by the end of the model year, automatics will outsell manuals by at least 2 to 1.
Mike wrote on October 8, 2014 - 12:20pm Permalink
This is the real reason. Manual transmissions are antiquated and have no place in the 21st century. The Viper should have been built with a twin clutch. Gilles chose not to and the market responded.