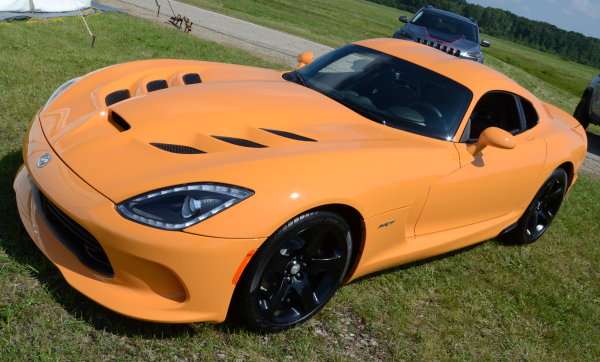 In order to help boost lagging sales, the Chrysler Group has cut the 2015 Dodge Viper pricing by $15,000 across the entire model lineup while also re-issuing pricing for the 2014 model year SRT Vipers that are currently unsold and to help cushion the blow of this huge price cut, the company will also issue $15,000 new car vouchers to those 2014 Viper owners who paid the old price.
Advertisement

The 2015 Dodge Viper has come with some big news, including a return to the Dodge brand, a few more horsepower, a new Grand Touring trimline, a couple new colors and a revised Time Attack package – but no news for the 2015 Viper is more important than the statement made today by the Chrysler Group. In order to help spur sales and to better compete with the competition, the Chrysler Group has cut the price of the mighty Viper by $15,000 for every trimline in the 2015 lineup. Also, to help move the 2014 SRT Vipers that are still in dealer inventory around the country, the price of those models will also receive the same $15,000 price cut.

“We have a saying at Dodge: ‘If you know... you know,’ and if you know Viper, you know this is big news,” Kuniskis added, “and if you don't know Viper, it's time to check it out and see what makes owning and driving the iconic Viper so much more unique, exclusive and interesting than any other American performance vehicle.”

It should be noted that none of these prices include tax, title, destination and gas guzzler fees, but those fees apply to both the 2014 models and the 2015 models so the key point of information here is that Chrysler has cut the price of the Dodge Viper by $15,000 for the new model year.

2014 SRT Viper Gets These Price Cuts, Too
While the new pricing schedules for the 2015 Dodge Viper should go a long way in helping to move the lightly refreshed supercars, the Chrysler Group has to also solve the problem of the 2014 model year SRT Vipers still sitting on dealership lots around the country. The problem is that dealerships are going to have a tough time selling a 2014 SRT Viper base model for $99,885 when the slightly more powerful 2015 Dodge Viper base model starts at just $84,885. To fix that problem, the Chrysler Group will send out new Monroneys (window stickers) for the 2014 Viper with the same $15,000 price reduction so starting very, very soon – the 2014 Vipers will have the same prices as the 2015 Vipers.

These 2014 SRT Viper model year changes are effective immediately, but it might take some time for the automakers to get the new stickers to dealerships. However, with production of the 2015 models scheduled to start later this year with the first units reaching dealerships early next year, the reduction in pricing for the 2014 Viper will give those folks looking to buy right away a chance to enjoy these deep discounts.

“The Gen 1 Viper had 400 horsepower. It didn’t have air conditioning, anti-lock brakes, traction control or stability control. It didn't even have real windows. It was the purest, rawest and most visceral American performance car of its time,” said Tim Kuniskis, President and CEO — Dodge and SRT Brands. “The Gen 5 Viper maintains the purity of the original car, with its seductive design, perfect weight balance and all-aluminum V10 with an additional 245 horsepower. But the rawness has been tamed with state-of-the-art five-mode ESC, two-mode suspension, ABS, traction control, launch control and a lightweight structure comprised of carbon fiber, magnesium and aluminum. Despite the Gen 5's massive leap forward in technology and performance, we're pulling its starting price back to the equivalent of the original Gen 1 car.”

The 2015 Dodge Viper will first be offered in base SRT and Grand Touring form while the new Time Attack 2.0 and the Viper GTS will arrive later in 2015 as a 2015.5 model year vehicle. Regardless of any of the details, this $15,000 price cut will almost certainly help improve sales of the mighty Mopar supercar. Click here for a closer look at all of the features of the 2015 Dodge Viper lineup.