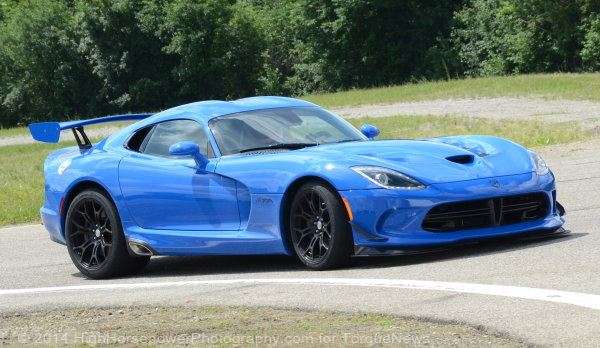 The 2015 Dodge Viper Time Attack 2.0 has gotten a handful of features that are reminiscent of the previous generation Viper ACR and a few more ponies – all of which should help make this street legal/track purposed supercar a bit faster around the world’s road courses in an effort to back up records set by the old ACR package.
Advertisement

The 2015 Viper has returned to the Dodge brand and with that return comes a new Grand Touring (GT) package, some new colors, some added power and some revisions that should help make the Time Attack 2.0 package even more venomous than last year’s model – hopefully allowing it to better compete with the upcoming 2015 Corvette Z06.

The Viper T/A Aspires to Catch the Viper ACR
When the 2013 SRT Viper was introduced, many people expected that it would out-gun the previous generation Dodge Viper SRT10. The highest performance road-going package for the previous generation Dodge Viper was the American Club Racer (ACR) package that was designed to yield the greatest results possible on a road course and it worked beautifully – setting track records all around the world including the likes of Laguna Seca and the German Nurburgring. The 2010 Viper ACR asserted itself as the most track capable production road car in the world, but in the Viper’s absence, the Chrysler Group saw those records broken.

Worse yet, when the 2013 SRT Viper was introduced, it was quickly found that it would not keep up with the Chevrolet Corvette ZR1 that had been little more than a whipping boy for the Viper ACR. When videos got out of the ZR1 beating the Viper around tracks where the old Viper had owned track records, Mopar fans began demanding a modern ACR package that would allow the Viper to properly thwart the Corvette and reclaim some track records.

Instead, the Chrysler Group rolled out the 2014 SRT Viper Time Attack (T/A), which was more of a stripped down and beefed up Viper GTS than it was a modern ACR. Fortunately, the Viper T/A was good enough to defeat the C6 Corvette ZR1 in those venues where the Chevy had beaten the 2013 Viper GTS…but even the TA was a far cry from the 4th generation Viper ACR. With the introduction of the 2015 Dodge Viper Time Attack 2.0, the T/A gets a little closer to the old Viper ACR in terms of appearance and – hopefully – in terms of performance capabilities.

The 2015 Dodge Viper T/A 2.0
The 2015 Dodge Viper Time Attack 2.0 is a little bit 2014 T/A and a little bit 2010 ACR. New for 2015 are front dive planes a more aggressive front splitter setup and a monster rear wing – all of which are very similar to features found on the 2010 Viper ACR. These additions allow the 2015 Viper T/A to experience 400 pounds of downforce at speeds over 150 miles per hour, as opposed to “only” 278lbs of downforce at those speeds with the 2014 Viper T/A. This added downforce should help high speed stability both on long straights and when cornering – so this might be the first 5th gen Viper that Chrysler publicly takes to the Nurburgring.

While those aerodynamic bits are the most vital additions to the 2015 Dodge Viper T/A 2.0, this track ready trimline also gets the same extra 5 horsepower as the rest of the new Viper lineup.

Finally, like the 2014 SRT Viper T/A, the 2015 Dodge Viper T/A has a track tuned, dual mode Bilstein Damptronic suspension system with settings that are unique to the Time Attack package, carbon fiber chassis components, a massive Brembo braking package and lightweight rims wrapped in high performance Pirelli P Zero Corsa tires – all of which make the Viper T/A one of the best performing road cars sold in the US today.

The bad news is that like the 2014 Viper T/A, the 2015 T/A 2.0 is restricted to just 96 units with 32 in Venom Black, 32 in Competition Blue and 32 in Yorange. Hopefully we will see at least a few of those new Dodge Viper T/A models hitting tracks around the world in an effort to protect the Viper’s records from the new and very improved Corvette Z06.

ih wrote on September 7, 2014 - 1:52pm Permalink
Time to retire the car. It is no longer relevant.
Ex Viper wrote on September 7, 2014 - 9:06pm Permalink
This heading says it all: "The Viper T/A Aspires to Catch the Viper ACR". That would be the 2015 Viper playing catch-up to 2008. What manufacturer thinks they have a winner by trying to duplicate their performance of SEVEN YEARS prior? Oh, and that 400 pounds of downforce for 2015 is barely a footnote to the old Viper's 1000 pounds at that same 150 MPH. The aero package is little more than a dress up kit on a pathetically poor-selling car that could barely beat the OLD Corvette ZR1 - .08th's of a second (less than a tenth of one single second) at Laguna Seca. Having left NASCAR to focus on snowmobile racing (look it up) and the ALMS series for the Viper, they have had two years to make it a champion. It never happened and now, lo and behold, Corvette is leading the series in their inaugural year. The Viper lost its halo status when it was reborn as an overpriced Ferrari wannabe. Doubtful that Sergio and the other Italians are too upset about the continued failings of their American stepchild, especially with Maserati growing by leaps and bounds. They already dumped the SRT CEO from that position - the same one that coddled this new failure. Time to put the Viper out of its misery before it gets any more embarrassing limited editions and performance gimmicks. It had a great run - let it die with some level of dignity.
Jeff prince wrote on February 28, 2015 - 11:53pm Permalink
The zr1 that was used to set those times had cup tires and knowing the GM backed motortrend who knows what other mods. As far as the viper gen v, it is a bad ass car that is 10 times the Obama owned government motors POS corvette.
JK wrote on October 27, 2014 - 11:50am Permalink
Everybody complains but I don't see any problem with it. The brand did a great job with the Gen V Viper both in the visual and performance department. Improving it from here is just the right thing to do. Like Randy Pobst said "it's something that needs to be tasted to fully understand". About comparing it to the Zr1, I just say it also took time to the Corvette ZR1 to beat the old ACR, like 3/4 years. Chevrolet took time and improved the car (they really did a great job) from 2008/9 to 2012/13. And the improvement was big, with the same driver (Randy Pobst) at Laguna Seca, originally did 1:35.80 and some years later 1:33.70. If someone took time and checked the lap times, the ACR did (with Chris Winkler, SRT engineer) 1:33.92, so the margin is not that big if you want to see it that way.
VIper-Vette wrote on November 25, 2014 - 1:45am Permalink
The Viper is in a league of its own. With no Convertible or auto option, and its low selling point it's more exclusive and I don't see a bunch of old dudes driving them like I do Vettes. I love the new Vette but it doesn't compare to the driving experience of the Viper
BRAD WOOD wrote on December 6, 2014 - 2:08pm Permalink
I always find comparing vehicles like this somewhat humorous. There are many cars on this planet that regardless of their performance numbers, or "value proposition", I'd never spend my money on. They include; Lamborghini Huracan Chevy Corvette (any of them) Ferrari 458 coupe Instead, I'd spend my money (and have) on; 997 Turbo Cab - fast as Hell, fun, comfortable, topless! Viper - brute force, rough, hard to tame, fun and not driven by poseurs (Lam/Fer) or old farts (Vette!) Panamera Turbo - blow-your-doors-off commuter So, while one may be .01 faster, or $30k cheaper, or whatever, each has their own personality and attitude. And lets be honest, even those of us with significant track experience can't get more than 90% out of any of the vehicles I just mentioned, including those I'd prefer not to spend my cash on.
SemperFido9915 wrote on December 15, 2014 - 7:54pm Permalink
Hey, now! The new Stingrays are definitely not for old farts. According to my Dad, who drove mine, the G-forces on the turns hurt his neck. That thing is a beast. Yes, it's nominally expensive, but I've always been a Vette guy. I can't help it. My Grandfather was, as is my Dad. Through the years, the complaint among Vette drivers is they can't corner as fast as heavier cars like the 911. They fixed that, and now? OMG! 1g cornering is the norm. The brutal corners of the 39 miles of California highway 9, from Los Gatos to my house in Bonny Doon are a serious adventure. For anyone who wants to ride the rails for considerably less than $100K, this is the car of choice.
Rod Cullins wrote on December 15, 2014 - 8:16pm Permalink
Okay, let's settle this once and for all... Put the Viper SRT TA2.0 up against the Z-06 with the same driver on the Nurburgring. Then, 5 years later, see how many of each are still on the road. I think I know the answer to both questions. I've been a professional driver for 25 years, and I bought a Stingray LT3 ZR-1, because the Z-06 scared me. Fact.