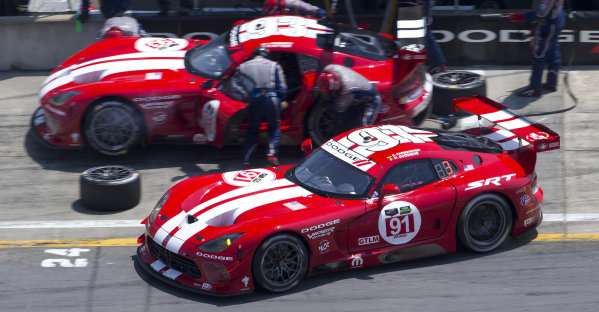 The TUDOR United SportsCar Championship took to the track of Watkin’s Glen this past weekend for the 7th race of the 2014 season and in its first race as the Dodge Viper GTS-R – the modern Viper race teams claimed two of the three podium spots trailing only one of the cross town rivals from Corvette Racing.
Advertisement

While this past weekend’s stop at Watkin’s Glen in New York was the 7th event of the 2014 TUDOR United SportsCar Championship season, it was only the 5th race for the teams of the production based GT LeMans class – in which the SRT Viper GTS-R teams compete. The Viper racing program got off to a solid start in the Rolex 24 when the #91 car overcame mechanical issues to finish 3rd in the class followed by a 2nd in class by the #93 Viper at the 12 Hours of Sebring, but the combination of “balance of performance adjustments” with the steady improvement by the new Chevrolet Corvette C7.R teams cause both Viper teams to turn in balmy finishes at Long Beach and Laguna Seca.

After struggling with mechanical issues in the first two events of the 2014 TUDOR season, the Chevrolet Corvette C7.R teams came on strong through the 3rd and 4th races of the season in the GTLM class, winning at Long Beach and Laguna Seca while the Vipers struggled. The Viper teams hoped to turn that trend around when they headed to Watkin’s Glen in New York and best of all, the “new” Dodge Viper race cars would get some help from the governing body.

Balance of Performance Adjustments
Earlier in the season, the SRT Viper GTS-R race teams looked very strong – strong enough to make up laps in the Rolex 24 to climb into a podium spot after problems early in the race. Unfortunately for the Viper teams, the IMSA folks thought that the Vipers were a little too fast in that first event and to rectify that, the governing body handed down a “balance of performance adjustment” to both Viper teams. These adjustments are designed to prevent any one type of race car from crushing everyone else in the field as to keep things interesting for the fans so when the Vipers were too fast in Daytona – IMSA knocked them down a few rungs. To be exact, IMSA required the Vipers to carry 15kg more weight (around 33 pounds) while also running an engine air restrictor plate that was 0.3mm smaller which allows the engine to make less power.

Making the Vipers heavier and less powerful worked, as they were clearly not as strong as they were early in the season as the best finish that either of the two SRT race cars could muster in Long Beach was a 7th while the best finish at Laguna Seca was a 6th in class. Fortunately, the IMSA folks opted to make yet another balance of performance adjustment for the Vipers – allowing them to remove the extra 33 pounds that they had been carrying while also going 0.3mm larger on the engine air restriction plate.

The New Dodge Viper GTS-R Looks Strong in Red
Now that the Chrysler Group has decided to kill off the SRT brand, the mighty Viper is going back to being the Dodge Viper so to celebrate the return to the Dodge badging – the two Vipers racing at Watkin’s Glen donned the familiar red and white paint schemes that adorned the championship winning Vipers of the late 1990s. For the first time in years, a factory backed Dodge Viper race car would compete in a major American endurance race on one of the most well known tracks in the country and it would do so not just with a new name – but with the same weight and power levels as the Vipers that looked so strong in Daytona.

The 2 Dodge Viper GTS-R teams didn’t get off to quite the amazing start that they had surely hoped in New York, turning in the 4th and 7th fastest laps (out of 11 GTLM cars) in the first practice followed by the 3rd and 7th fastest laps in practice #2. Things looked a little worse after qualifying, when the two Vipers clustered together to start in the 5th and 6th spots, but the once the drivers got to battling in traffic during the race, things were looking up.

In fact, both the #91 and #93 Dodge Viper spent time at the front of the GTLM field during the 6 hour race in New York and when it came down to the final minutes of the race – the #91 Viper battled neck and neck with the #3 Corvette right down to the last turn. Unfortunately for the Viper teams and their fans, the Corvette got to the line first and took the win but with the #91 Viper finishing second and the #93 Viper finishing third – it was a great weekend for the Viper teams.