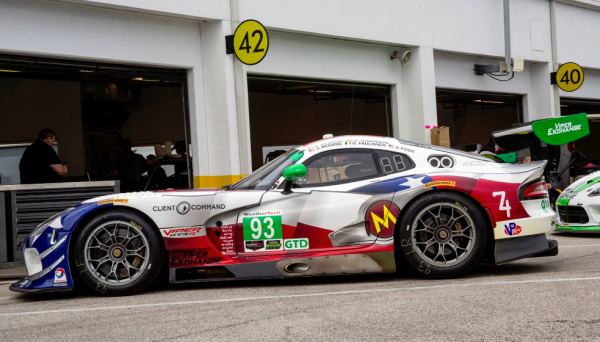 Dodge Viper Finishes 3rd,10th in the Rolex 24 at Daytona

While the Viper Exchange.com team wasn’t able to claim a second straight win at the Rolex 24 at Daytona, the #93 Dodge Viper GT3-R gave the team a podium finish for the second straight year while the #33 team car overcame a late night crash to finish in 10th.
Advertisement

The Riley Motorsports/ViperExchange.com Dodge Viper GT3-R race teams headed into the 2016 Rolex 24 at Daytona with the hopes of defending their 2015 GT Daytona class win. The Viper teams came to Daytona with new sponsors, some new drivers and high hopes in what would be the biggest class in the huge field. Of the 54 car field, 22 of them were in the GTD class, meaning that the Viper teams would have to beat 20 teams from Audi, Porsche, Aston Martin, Lamborghini, BMW and Ferrari to claim back-to-back Rolex titles.

Sadly, they would fall a bit short of the win, but both Dodge Viper teams turned in solid runs, with the #93 Viper finishing 3rd in the GTD class (16th overall) and the #33 Viper finishing 10th in the GTD class (24th overall). As a result of this strong finish, the #93 Viper was able to sit on the podium for the second straight year, while the #33 Viper’s finish allowed the Riley Dodge team to be the only two-car team with both cars in the top ten.

3rd and 10th in 24 Hours
During the course of the grueling 24 hour endurance race at Daytona International Speedway, both of the Dodge Viper GT3-R teams looked strong – spending time around the front of the huge GTD field. Both teams were able to run much of the first half of the race without any incident, until Ben Keating ran off course in the #33 Viper, hitting one of the tire walls and doing massive damage to the car. It took the safety crew 5 laps worth of time to get the Viper out of the tires and into the garage area. It only took the team another 5 minutes to replace all of the braking components, the wheels and tires, the front bumper, the rear bumper, the hood, a door and the rear quarter panel.

Thanks to that incredible effort by the team, the #33 Gas Monkey Garage Dodge Viper was back on the track after losing only 10 laps to the leader. That loss of laps took the #33 Viper out of contention for the win, but the car was still strong enough to finish the race with 700 laps thanks to a solid driving effort by the crew of Keating, Jeroen Bleekemolen, Dominik Farnbacher and Marc Miller - just 3 laps behind the class winner. That class winner was the #44 Audi R8, which was joined on the lead lap by the #540 Porsche 911 and the #93 Dodge Viper.

Unlike the #33 Viper, the #93 car had relatively clean running throughout the 24 hour race at Daytona. The driver’s crew of Ben Keating, Jeff Mosing, Eric Foss, Gar Robinson and Damien Faulkner kept the #93 Viper around the front of the field throughout the race, dropping back for pit stops and then working their way back to the front of the GTD class. With one hour left, the Team Texas Viper was in 6th spot, but Damien Faulkner moved the #93 from 6th to 3rd in the final hour to secure the team’s second straight podium finish.

The next battle of the season for the Dodge Viper teams is the 12 Hours of Sebring March 16-19.