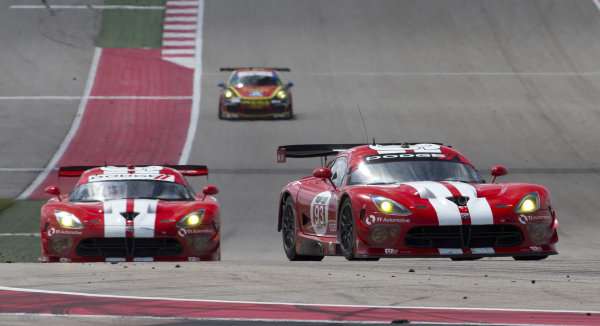 This past weekend was the most successful for the modern Dodge Viper racing program thus far with a Viper taking the win in both production based classes – allowing the #93 Viper to climb ahead of the #3 Corvette in the battle for the GTLM championship with just one race left.
Advertisement

The GT LeMans (GTLM) class of the 2014 Tudor United SportsCar Championship has been an exciting one this season and while there have been plenty of successful Porsche, Ferrari and BMW outings – the main event has really been the fight between the new Chevrolet Corvette C7R and the Dodge Viper GTS-R. The two Detroit supercars have traded blows all season and while the Corvette has been atop the standings throughout most of the season, a late season push by the Viper teams have allowed the V10 supercar to climb to the head of the GTLM class with just one race left.

Also, in the GT Daytona class, Ben Keating piloted his #33 Dodge Viper race car to his second win of the season.

Viper Dominates, Corvette Struggles in GTLM
The second to last race of the 2014 United SportsCar Championship brought the drivers and cars to Austin Texas and the Circuit of the Americas (COTA), where the #93 Dodge Viper team looked to continue their streak of top five finishes and close the narrow gap between themselves and the leading Corvette Racing team. The driver duo of Kumo Wittmer and Jonathan Bomarito got off to a great start in the #93 Viper, with decent practice times backed up by a monster qualifying run that put the 93 car on the GTLM pole position. The #91 Viper piloted by Dominik Farnbacher and Marc Goossens qualified 4th in the GTLM class while the #3 Corvette started in the 7th spot and the #4 Corvette started 9th.

When the race started, the #93 Viper spent a significant amount of time at the head of the GTLM field and the #91 Viper was right behind in second. Other than a few times during pit stops, the Vipers were the class of the GTLM field throughout the first half of the race and even late in the race when a Porsche 911 was in the lead after a round of pit stops, the Vipers were a close second and third. When that Porsche ran into mechanical problems, the Vipers literally ran away with the GTLM class win in dominating fashion – with only one other car in the class on the same lap.

On the other hand, things couldn’t have gone much worse for the Chevrolet Corvette C7R teams. After turning in fairly poor qualifying efforts, an early run towards the front by the #3 Corvette was cut short by mechanical problems. Handling problems hammered the #4 Corvette all day and as virtue of these issues, the two Corvettes finished in 9th and 10th – the worst of the GTLM cars still on the track.

Viper Takes the Lead in the Championship Race
Thanks to a combination of the #93 Dodge Viper dominating the race and the #3 Chevrolet Corvette struggling, the Viper team of Wittmer and Bomarito has claimed the top spot in both the driver’s championship and the team championship. These two have driven their Viper to six straight top five finishes including five podium finishes and two victories, allowing them to lead Corvette racer Antonio Garcia in the driver’s championship by 7 points while leading the #3 Corvette in the team race by the same 7 points with just one race left.

The #91 Dodge Viper of Farnbacher and Goossens sits in the 3rd spot in the team battle, ten points behind the #3 Corvette while the drivers are 10 points behind Garcia in the driver’s championship.

Finally, the 6th straight top five finish allowed the Dodge/SRT teams to pull into a tie with Porsche for the top spot in the manufacturer’s championship.

Who Will Win the 2014 Tudor Championships?
The battle for the 2014 Tudor United SportsCar Championships will come down to the final race of the season – the Petit LeMans at Road Atlanta. While an incredibly bad day for both the Viper and Corvette teams could lead to a championship run by some of the other teams and drivers in the field, the battle for the driver’s and team title will very likely come down to the #93 Viper and the #3 Corvette.

The winner of the GTLM class at Road Atlanta will receive 36 points so for the Corvette to reclaim the lead and win the driver and team championship, Antonio Garcia will need to win the race and he needs the #93 Viper to finish 5th or worse. All the #93 Viper has to do in the Petit LeMans is finish in the top 3 – or simply finish better than the #3 Corvette – and Kumo Wittmer and Jonathan Bomarito will take two championships with their Dodge Viper GTS-R.

Over in the manufacturer’s championship, the stage is set for a shootout between Porsche and Dodge/SRT. Chevrolet and BMW could make a run at the title with strong enough finishes on their parts and poor enough finishes by all of the Porsche and Dodge teams, but the odds are good that the best finishing Viper or 911 will help their company win that title.

The 10 hour long Petit LeMans is scheduled to run at Road Atlanta on October 4th.