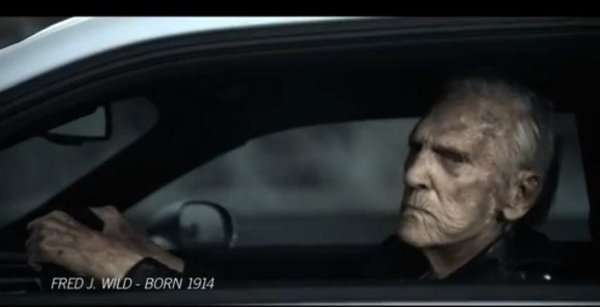 The Dodge brand is celebrating 100 years in business in 2014 and to talk about the advantages of existing for that long, Dodge introduced a new minute long clip showing a great many people over the age of 100 talking about what can be learned – with this unusual video featuring the new 2015 Challenger 392 Hemi Scat Pack Shaker.
Advertisement

While most people are focused on the debut of the 2015 Dodge Charger, the 2015 Dodge Challenger and the newest SRT Viper packages, 2014 also marks the 100th year of the Dodge brand being in business. To celebrate and maybe even show off what Dodge has learned in the past half century, the company has put together this short video featuring a bunch of people over 100 years old and one old guy doing a nasty burnout in the new 2015 Challenger 392 Hemi Scat Pack Shaker.

This video debuted today at the 2014 New York International Auto Show as a backdrop to the debut of the 2015 Dodge Charger and 2015 Dodge Challenger. It features a collection of folks who were both in the years prior to the mid 1920s so, like Dodge, they are 100 years old (or close to it) and the early portions of this video has a group of these century-old folks talking about the things that they have learned in their years on this Earth. This video also features a man named Fred J Wild, who was born in 1914 – the same year that the Dodge brand was formed.

While all of these old folks offer up tidbits of information on what they have learned in the last century, Mr. Wild is shown sitting behind the wheel of a new Challenger 392 Hemi Scat Pack Shaker. As the video continues on, we see this same silver Challenger doing an incredible burnout and I’d like to think that Fred – at 100 years old – is behind the wheel of this Mopar muscle car as it blows away the rear tires.

Now, while I understand that both this new promotional video and my piece about the video focus on the fact that this is, in effect, a Dodge commercial – the information offered up by these older folks is all very good. As you watch it, pay attention to the words spoken by these 100 year old men and women and think to yourself about how true their words are…and whether you have learned to live your own by these fine points brought up by people who have been alive since the early days of the automobile.

Things like keeping your eyes open and your mouth shut, don’t complain,, don’t be a sissy, suck it up, be a bad boy, raise some hell, put the pedal to the metal, live fast and never forget where you came from are all things that too many Americans don’t consider as they travel through life…but they should. The video might be a little creepy, but it is also fairly profound. Enjoy.