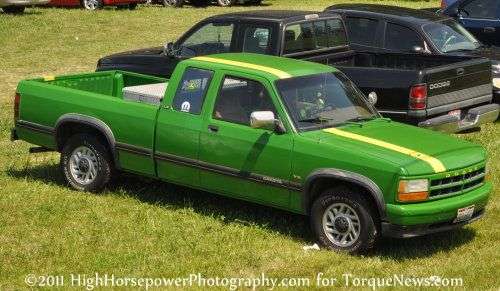 Tuesday, August 23rd 2011 marks the end of an era for the Chrysler Group as the Dodge Dakota turned Ram Dakota will officially see the end of its 24 year production run.
Advertisement

This afternoon, Chrysler’s Warren Truck Assembly Plant in Michigan will send the last Dakota pickup down the line and while rumors suggested that it would quickly be replaced, new reports suggest that Chrysler has put the development of the midsized pickup on hold. Chrysler CEO Sergio Marchionne has commented about a “lifestyle vehicle” replacing the Dakota, possibly something with a lighter and more efficient unibody chassis. At the 2011 Detroit Auto Show, I had a chance to sit down with Ram Brand CEO Fred Diaz who couldn’t comment on the future replacement of the Dakota but in our discussion, it seemed that there was definitely something on the way. Mr. Diaz pointed out that with the most recent generation of the Dakota, there was just too much competition between the two Ram branded pickups and the Dakota was clearly losing the battle.

Sales of the Dakota were slipping long before the Ram brand split away from the Dodge brand but as both the Dakota and the larger Ram 1500 have evolved over the past 2 decades, the larger truck has improved while the mid-sized Dakota has really has not. When the Dakota was introduced in the late 1980s, it had an identity of its own which clearly separated the smaller truck from the full size Ram. The Dakota had sporty models like the Shelby Convertible versions and the R/T performance models which the smaller stature of the Dakota making for a great sport truck platform. Unfortunately, as the Dakota aged it became larger, less powerful and less of a sport truck. When you combine that with the fact that the Ram has gradually gotten more powerful and now it costs less in base form than does the Dakota, it’s not hard to see why the smaller of the two struggled in recent years.

In its 24 year production run, the Dodge Dakota has gained quite a following and on various internet communities such as DodgeForum.com, Dakota owners have been unhappy for some time to hear that their beloved truck would be meeting its demise. However, when you consider the steady decline in Dakota sales and the fact that non-full size pickups account for a very small piece of the overall pie, it makes a little more sense to see that Chrysler and Ford have both ended their small truck program in the US (for the time being).

To illustrate how badly things have dropped off for the Dakota, in 2000 the Dodge Dakota moved 177,000+ units which works out to roughly 14,750 trucks a month. Last YEAR, the Ram Dakota sold just over 13,000 trucks…less than what the model sold in an average month a decade ago.