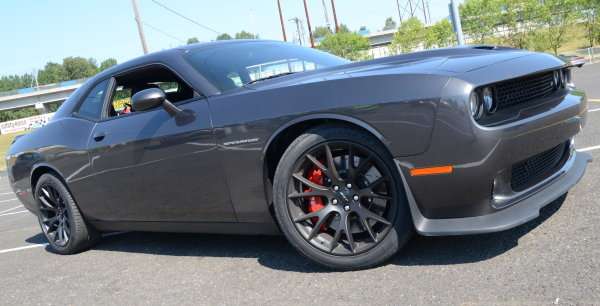 Dodge Dealers Make $5,400 on Every Challenger Hellcat Sold at MSRP

Some dealership people will try to lead you to believe that cars like the 2015 Dodge Challenger SRT Hellcat have huge markups because “the dealership doesn’t make any money at MSRP”, but thanks to the folks at Allpar, we know that the dealership makes at least $5,400 on every Hellcat Challenger sold at MSRP.
Advertisement

New car dealerships like to haggle prices based on the fact that they “need to make money” on the deal and with cars like the 2015 Dodge Challenger SRT Hellcat, dealerships may complain that they don’t make a whole lot of money so they tack on big markups over MSRP. Unfortunately, it isn’t all that easy to find out just how much money a dealership makes on a new car so some consumers buy into the “poor me” sales pitch and stop haggling.

Fortunately, thanks to Allpar, we know exactly how much money a dealership will make on every Hellcat Challenger sold at MSRP and while the number isn’t particularly high for a $60k car – there is plenty of profit built into the MSRP of the most powerful muscle car ever.

Dealership Profit on Each 2015 Dodge Challenger SRT Hellcat
The 2015 Dodge Challenger SRT Hellcat carries an MSRP including destination fees of $60,990 when fitted with the 6-speed manual transmission. The built in profit of this car is $3,368 plus $29 that Chrysler sends the dealership for gas and the $51 worth of the gas guzzler tax paid by Chrysler. The automaker also has a $1,982 holdback charge, which is a paid to the dealership on every unit sold to discourage any dealership markup. After all, Chrysler would prefer if prospective consumers went into the dealership to pay the same prices that they see on the Dodge.com website. When you add up those amounts that stay in the dealer’s pocket, you get a total of $5,430 so on every 2015 Challenger Hellcat sold at that $60,990 MSRP, the dealership makes $5,430.

That dollar value goes up if the 2015 Challenger Hellcat buyer opts for navigation, which adds another $76 to the dealer’s bottom line, while those models with the new 8-speed automatic transmission come with an instant $220 of extra profit for the dealership. This means that a dealership that sells a 2015 Hellcat Challenger with navigation and the automatic transmission makes around $5,726.

Now, as a $60-64k new vehicle goes, $5,726 isn’t a whole lot of profit, but that is a very fair profit margin for a car that is going to bring in a whole lot of foot traffic – some of which will purchase other cars including non-Hellcat powered 2015 Challengers. This $5,726 profit is why guys like Bob Frederick of the Frederick Scat Pack website can sell Hellcat Challengers at MSRP.

Smart Hellcat Shopping Can Save You Money
If you are looking to buy a 2015 Dodge Challenger SRT Hellcat and you would rather pay a price closer to the official $60,990 MSRP, it is possible, but you might need to do some shopping around. I have spoken to shoppers who have been able to reserve a Hellcat Challenger at MSRP and I’ve also talked to folks who had to agree to a $5,000 upcharge. The recently announced allocation process should help put a limit on both the time and value of dealership markups and with some dealers looking to move units at MSRP, it will make it harder for those dealers adding $20,000 to the price to move units.

The bad news is that at this point, the fastest acting Hellcat Challenger buyers have snatched up many of the first units expected to reach dealerships. In many cases, the allocation numbers for many dealerships around the country have already been spoken for so if you haven’t ordered one already, you will likely be waiting a while before more units roll off of the production line. Fortunately, that wait will likely allow you to avoid the first-run markups that are always the biggest.

Troy Anderson wrote on September 14, 2014 - 11:48am Permalink
Now write an article how all the dealers are jacking up the price to 75G and how they are telling all the customers this is a limited special edition and that they will never see one for less than 75G.
Patrick Rall wrote on September 15, 2014 - 9:08pm Permalink
Fortunately, that isnt the case. I have featured a dealership on TorqueNews that is openly selling them for MSRP.
johnny wrote on September 16, 2014 - 8:59pm Permalink
When they produce the car , then I will believe It! It seems that the biggest dealerships are being allocated at most 3 cars ! Sounds like a lot of people will be getting their deposits back!
rhubarb austin wrote on October 14, 2014 - 2:47am Permalink
That's not true..they are selling them at msrp because most don't have a alottment.if they don't have a allotment they cannot get one..manyi dealerships are trying to tell people if you put money down and order one they will get one but they actually wont and if the dealership goes bankrupt you will lose your money make sure you clarify that they have a alloted one to sell you alsoget them to make make the order and when they show you a VIN number you can give them the deposit then this means that you actually are ordering a car that is being built I study this and called hundreds of dealerships I know probably better than anybody they are actually lying and cheating people...if anybody has any questions have them contact me on Facebook its rhu Austin
Rob wrote on September 23, 2014 - 11:23am Permalink
And of course, those dealerships have no expenses, do they! How about VERY expensive training, special tools, advertising, health care, retirement plans, etc. This article makes it sound like every Hellcat sold nets the dealer over $5,000.00 profit. THAT IS NOT TRUE! The writer probably make darn near $30,000.00 per year...does he get to keep it all?
jim bowen wrote on October 8, 2014 - 5:16pm Permalink
Ya and I bet all those dealership owners are on welfare too. Cry a river for them poor bastards.
rhu austin wrote on October 14, 2014 - 2:51am Permalink
the dealerships don't have to lie and tell people if they put out 5000 down did they would order a car when they have no allotment.this is cheating customers and if they have no allotment they cannot actually order a car that will be built.
Vince wrote on October 2, 2014 - 3:26pm Permalink
I have emailed 4 dealers and all of them are selling at MSRP.. no over charge. Of course it's 10/2/2014, so maybe all the first allocated cars are gone but they will order one for me at MSRP... I guess the wait will just be longer.
[email protected] wrote on October 14, 2014 - 2:58am Permalink
did you ask those dealerships if they got a alottment.I have called over 200 dealerships in the country and I know which ones actually have a allotment.if you ordered one from the allotment ask them what the build status is and if you have a VIN number yet I have a VIN number on mine build status d1usually a car cannot stay in one build status for more than 20 days my car is scheduled to be at the dealer on the 21st of November.anyone who puts money down at a dealership that does not have a allotmentwill be waiting a long long time and I feel sorry for you you got duked.if that dealer goes bankrupt you lose your money down.I paid five thousand over MSRP gladly because I have a allotment and VIN numbers and I know I'm getting my car so please people be careful if they have no allotment get your money back find someone that does
Daniel wrote on October 27, 2014 - 10:00pm Permalink
I have reserved a Hellcat, received a VIN and the vehicle is in storage. I went to the dealer to ensure I knew all taxes and costs. Apparently they are marking up the price to $87,220. What happened to the no markup?! Who can we contact to get real answers?
Nora wrote on December 11, 2014 - 9:36am Permalink
There is no reason that a dealership shouldn't be happy to have customers who don't mind agreeing to pay full list for a unique vehicle. In the end,(sorry Hellcat enthusiasts) it is just another vehicle. There is no call to jack the price over list. Everyone has overhead, and expenses to run their business. A $5000+ markup is plenty.
Tom wrote on April 21, 2015 - 1:22pm Permalink
Everyone thinks dealers are overpaid, When a realator sells a house they get as high as 6%, on a $250000 home that's $15,000.00 dollars and they have no investment...
Chris wrote on May 23, 2016 - 6:37pm Permalink
Most dealers ARE deceitful and misleading unless you are very, very savvy. I've bought 100 new cars in my life and I never had a single dealer not try to trick me into something -- each time I caught them. In one case, a dealer paid dearly. A dealer tried to show my rebate as a discount they offered. I knew better. When they tried to unwind the deal, I wouldn't let them. So in the end they had to pay the rebate AND apply my rebate as a separate discount -- it backfired on them.
Tape wrote on August 5, 2020 - 10:51am Permalink
They make more than $5000, hell sometimes they give that much off the MSRP then jack everything back on. Car dealers are the dirtiest bastard on the planet, they lie as much as police officers.