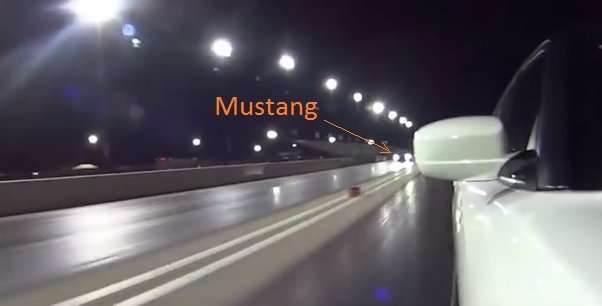 Today, we bring you a drag racing video featuring a Dodge Charger SRT Hellcat going against a Ford Mustang GT with an aftermarket supercharger setup, and while the racing action is great – this video should remind racers not to write checks with their mouths that their cars can’t cash.
Advertisement

If you put a stock 2015 Ford Mustang GT with 435 horsepower against a stock Dodge Charger SRT Hellcat with 707 horsepower in a quarter mile drag race with similarly competent drivers, there is a good chance that the big Mopar sedan would win every race. However, when you add a supercharger setup and a good tune to that same Mustang GT, lifting the output to around 800 rear wheel horsepower, the story is a little different.

A newer Ford Mustang GT with 800 rear wheel horsepower stands a good chance of beating your average Hellcat Charger and because of that, the driver of the pony car in the video below talks some trash going into the race. Unfortunately for him, his car couldn’t back up his mouth, as the Hellcat Hemi-powered Dodge sedan handed out a beatin’ on the quarter mile.

This video was brought to my attention by the owner of the Hellcat, and the Mustang owner is a friend of his who had been talking trash for some time about how his car with 800 rear wheel horsepower would beat up the world’s fastest 4-door sedan. The Mustang owner surely knew that the Hellcat Charger was not stock, packing around 850 rear wheel horsepower, but he still thought that his coupe could stomp the sedan. Perhaps he was figuring that the thousand pound weight advantage would be enough for his Ford to win the race, even though he has less power.

In fact, in the video, he stated that the race should be “very easy” for him and his 800 rear wheel horsepower Mustang. Turns out, it was very easy – just not for him.

We get to watch this race from a handful of angles, but in every one of them, the Dodge Charger SRT Hellcat puts bus lengths on the Mustang GT in the short race. The Charger laid down an impressive 10.05 run, easily beating the Mustang’s time of 10.5.

Warning: There is some brash language, so be aware of that when watching the video below.