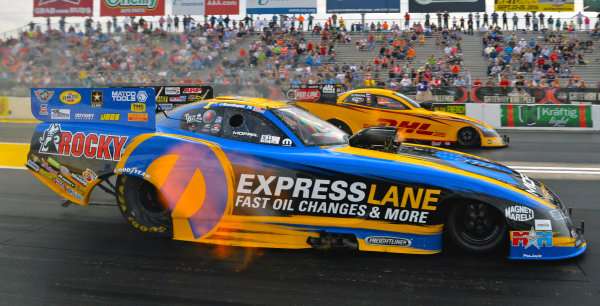 After the Don Schumacher Racing Dodge Charger funny cars dominated the first portion of the 2015 Mello Yello Drag Racing Series - winning 14 of the first 18 races of the season - the Mopar teams have entered the Countdown to the Championship by losing the final round in the each of the last two races.
Advertisement

The 2015 Dodge Charger funny cars campaigned by Don Schumacher Racing were beasts, setting records at nearly every event while winning 14 of the first 18 races of the 2015 season. The quartet of Matt Hagan, Jack Beckman, Ron Capps and Tommy Johnson Jr put together a season like few teams in NHRA history, never going back to back weeks without a win. However, as the teams have entered the six race shootout known as the Countdown to the Championship, the Don Schumacher Chargers have gone two races in a row without a win for the first time since 2014.

Worsham Wins in Carolina
When the funny car teams got to ZMax Dragway for the 1st event of the 2015 Mello Yello Countdown to the Championship, the Don Schumacher Racing Dodge Charger crews accounted for the top three spots in the title run. Beckman was 1st, Hagan was 2nd and Johnson was 3rd. Teammate Ron Capps sat back in 6th, with Toyota’s Del Worsham sitting 4th and Camaro-driving legend John Force in 5th. With 4 of the top six in the championship hunt, the DSR Charger funny cars were the clear favorite for the title – but things didn’t go as planned in Carolina.

Tommy Johnson Jr turned in the top time at ZMax a few weeks back, while Ron Capps qualified 3rd, Hagan started 7th and Beckman was 8th going into round 1. All four team cars in the top half of the bracket was good news for Don Schumacher Racing, and while Beckman lost in the first round, the other three drivers advanced. Unfortunately, while top qualifier Tommy Johnson Jr won his second round run, Ron Capps lost to John Force and Hagan lost to Del Worsham. Worsham’s Toyota would beat Force’s Camaro to head to the finals while Johnson beat Alexis DeJoria to meet Del in the finals.

This was a familiar position for DSR and Worsham, but unlike previous late-round meetings, the Dodge Charger didn’t get the better pass. Worsham pulled a slightly better reaction time and laid down a better ET to win the race.

Onto St Louis
When the teams headed to St Louis for the AAA Insurance Midwest Nationals, the DSR Dodge Charger funny cars were even heavier favorites, as every time a non-Charger had won an event in 2015, a Charger came back to win the next event. To make things look even better for Mopar fans, qualifying was a symphony of speed for the Schumacher teams, with Hagan grabbing the top spot, Beckman starting 3rd, Capps starting 4th and Johnson starting 5th on the bracket. All four DSR Chargers were in the top five heading into round one of eliminations, with only Del Worsham and his Toyota Camry breaking up the fun in the 2nd spot.

In round one, DeJoria got revenge for the previous week on Tommy Johnson Jr., but Hagan, Capps and Beckman all won their way into round two. In round two, Hagan beat John Force and Capps beat DeJoria, while Beckman lost to Cruz Pedregon. Meanwhile, Del Worsham beat Tony Pedregon and Tim Wilkerson to join Cruz, Hagan and Capps in the final four.

In the final four, Capps broke and a timing system problem struck Hagan, but it didn’t matter since he won the race. On the other side, Worsham ran the fastest trap speed of eliminations in beating Pedregon – setting up the second straight Mopar VS Toyota final round battle.

In the finals, Matt Hagan pulled a slightly better reaction time, but Worsham drove around him, running a 3.964 to the Dodge’s 3.983 – giving the Toyota its second straight win and allowing Worsham to extend his lead in the championship run.
The teams will head to Reading PA this weekend for the Keystone Nationals, where the Don Schumacher Dodge Charger teams will work to prevent Worsham from strolling to a championship win.