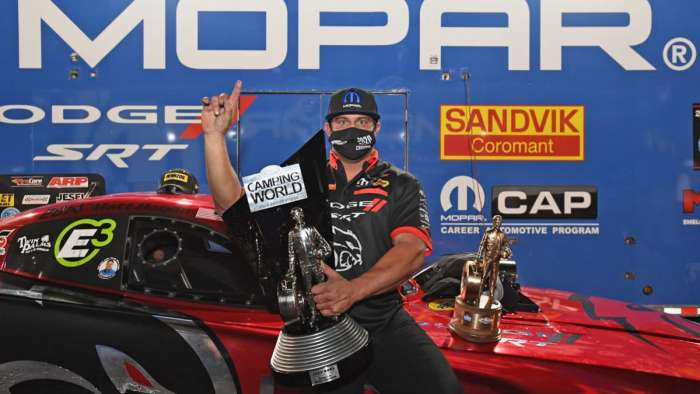 The Dodge Charger SRT Hellcat funny cars from Don Schumacher Racing completed their undefeated season this past weekend in Las Vegas, with Matt Hagan claiming his third win in the 11 race season while also wrapping up his third career NHRA championship, holding off teammates Tommy Johnson Jr. and Jack Beckman to take home the title.
Advertisement

While 2020 has been pretty terrible overall, the shortened NHRA racing season has gone as smoothly as possible for the four Dodge Charger SRT Hellcat funny car drives from Don Schumacher Racing. After finishing the 2019 with three-straight wins, the quarter of Matt Hagan, Ron Capps, Tommy Johnson Jr. and Jack Beckman dominated the class through 2020, winning all 11 of the races held during the pandemic-shortened schedule.

A Crazy 2020 Season
The season started off normally back in February, with Jack Beckman and his Charger beating John Force and his Camaro at the Winternationals to open the season. A few weeks later, Tommy Johnson Jr, beat Beckman in the finals of the Arizona Nationals. After that second event, the Covid-19 pandemic hit the United States and the series took several months off. When they got back to racing in July, the schedule had been abbreviated, as had the field. The John Force Racing team opted not to come back to compete in the shortened schedule, leaving the Don Schumacher Racing without their heated rivals.

As you might expect, having the JFR Chevrolet Camaros step away from the series for the final nine races of 2020 paved the way for DSR Dodge Charger domination. DSR drivers won all nine of the races after the series picked back up and six of those races saw two DSR Charger drivers battling in the finals. This domination throughout the shortened season allowed the Mopar drivers to occupy each of the top four spots in the championship race. At the Dodge NHRA Finals in Las Vegas, it was just a matter of which Schumacher funny car would shine brightest and grab the title.

Chasing the Title
Matt Hagan came into the final event of the 2020 NHRA season in first place, trailing teammates Johnson and Beckman by about 40 points each. To secure the title, he simply had to finish better than those two teammates, and he got off to a great start. Hagan’s Dodge Charger SRT Hellcat funny car was quickest in the first round of qualifying and although Ron Capps jumped ahead of him in the final round of qualifying, Hagan picked up a few extra points over his teammates before the eliminations began. Johnson qualified fourth and Beckman started in the 10th spot, so Hagan gains two points on Johnson and five points on Beckman in qualifying. However, those few points wouldn’t matter in the long run.

Jack Beckman lost to Paul Lee in the first round of eliminations, ending his chance at the title. However, Hagan and Johnson both made it through to round #2, keeping each of their title hopes alive. Ron Capps also won in the first round of the final event, but he was not in championship contention.

In the semifinals, Matt Hagan beat DeJoria badly on the tree and cruised to victory while Capps and Johnson had a thrilling head-to-head drag race which saw Capps take a narrow win on the big end. This set up another all-Dodge final round for the funny cars. In losing to Capps, Tommy Johnson Jr.’s chances of winning the title was gone, meaning that Matt Hagan had officially tied up the championship, but he wasn’t done racing.

In the finals, Hagan slept at the light a bit, giving Ron Capps an early lead, but when Capps ran into engine issues around half-track, Hagan raced to the win with a 3.914 at 326 miles per hour. That marked his third win of the 2020 season while his overall performance scored him his third NHRA championship.

The first driver in the final standings who wasn’t driving a Dodge Charger SRT Hellcat was Bob Tasca III, who finished in the fifth spot in his Ford Mustang with 679 points.