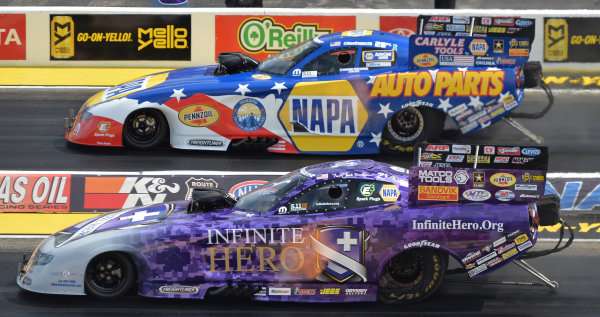 Fast Jack Beckman claimed his 1st win of the 2016 NHRA season this weekend at the K&N Route 66 Nationals in what was also the 7th straight win for a Dodge Charger funny car - with 6 of those 7 wins coming in all-Dodge final rounds.
Advertisement

After the 7th race of the 2016 NHRA season, Don Schumacher Racing had only put a Dodge Charger funny car in the winner’s circle one time, but in the next 7 events, the factory-backed Mopar teams have reeled off an impressive 7-straight wins with 6 all-Dodge final rounds. During that time, the only non-DSR driver to make it into a final round came in in Summit Nationals when Courtney Force took her Camaro the finals, where she was beaten by Ron Capps. That is 14 final round spots and one 1 of them was not a Dodge Charger.
In other words, after a slow start to the season, the DSR Dodge Charger funny car teams are firing on all cylinders and dominating the competition with just 5 events left before the Countdown to the Championship.

Qualifying
As has been the case more often than not over the past few events of the 2016 NHRA season, the Don Schumacher Dodge Charger funny cars were fast out of the trailers, with Ron Capps setting the pace with a 1st round run of 3.91 making him the quickest in the class. Jack Beckman and Matt Hagan both joined Capps in the 3-second group in the 1st round of qualifying while grabbing the 6th and 7th spots in a very quick opening round. Tommy Johnson Jr was the “slowest” of the DSR Dodge Charger funny cars, running a 4.013.

At the same time, there were plenty of other fast cars in the 1st round of funny car qualifying, with Del Worsham (Toyota Camry), Tim Wilkerson (Ford Mustang), Courtney Force (Chevrolet Camaro) and Robert Hight (Chevrolet Camaro) rounding out the top five after round 1.
In the 2nd round of qualifying, the field got even quicker, but with a run of 3.888 at 328 miles per hour, Ron Capps stayed atop the ladder. Hagan jumped up to 4th and Johnson moved into 7th, while Beckman dropped to 9th. Meanwhile, Tim Wilkerson and Robert Hight grabbed the 2nd and 3rd spots, just behind Capps.

The 3rd round of qualifying was one of those rounds where the quicker cars struggled to cut any time, so while there was some jostling of position further back in the field of 16, the top spots remained unchanged and Capps held onto the top qualifier position.

However, that would all changed in the 4th round, when Matt Hagan’s run of 3.882 at 331.12 miles per hour launched him into the top spot. Jack Beckman ran a 3.885 to take the second spot and Alexis DeJoria in a Toyota Camry claimed the 3rd position – leaving Capps to “settle” for the 4th spot with his round 2 run of 3.888.

Eliminations
The 1st round of eliminations at the K&N Route 66 Nationals went as good as it could for the Don Schumacher Dodge Charger funny cars. Matt Hagan beat Bob Bode and ran the quickest run of the round in doing so. Tommy Johnson Jr beat Chad Head, Ron Capps beat John Force and Jack Beckman beat John Hale.

In addition to those four Dodge Charger teams moving onto round #2, Bob Tasca III, Courtney Force, Robert Hight and Alexis DeJoria won their 1st round battle.

In the 2nd round, the only DSR Charger to lose was Tommy Johnson Jr, who had to run teammate and fast qualifier Matt Hagan. Hagan grabbed the hole shot lead and never looked back, while Ron Capps beat Bob Tasca III, Jack Beckman beat Courtney Force and Robert Hight beat Alexis DeJoria when the she seemingly fell asleep at the starting line.

This set of a 3rd round final four battle with three Don Schumacher Dodge Charger funny cars and one John Force Racing Chevrolet Camaro. Matt Hagan took on Ron Capps and while Hagan grabbed the early lead, he ran into trouble and Capps walked to the round win. In the other matchup, Robert Hight’s Camaro held an early lead over Beckman’s Charger, but Fast Jack earned his name and took the come from behind win – setting up the 6th all-Dodge funny car final in the past 7 events.

The Finals
In the final round, Fast Jack Beckman had lane choice over Ron Capps and while Capps had a brief lead when the two Mopar monsters left the starting line, he ran into troubles as they headed down the track while Beckman made a nice, clean and quick run to take his 1st win of the 2016 NHRA season.

Championship Standings
Even though this past weekend brought Jack Beckman his 1st win of the season, his strong finishes in those events that he didn’t win have allowed him to remain high on the championship leaderboard and with his 1st win, he moves into the 2nd spot in the running for the title. Ron Capps still leads the championship hunt but Beckman is just 126 points back. Courtney Force is 3rd (-176), Matt Hagan is 4th (-240) and Tommy Johnson Jr is 5th (-265).

That’s right – after winning just one of the first 7 events of the season, the Don Schumacher Dodge Charger funny cars sit in 4 of the top 5 slots in the championship battle with just 5 races left before the Countdown to the Championship begins.