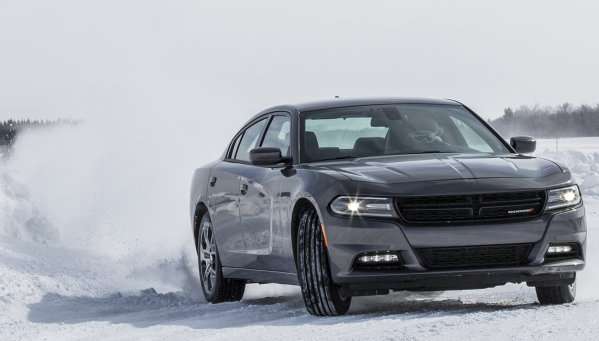 FCA has announced a voluntary recall of select all-wheel drive Dodge Charger and Chrysler 300 sedans over a concern that the front driveshaft bolts could work themselves loose, decreasing vehicle control and increasing the likelihood of an accident – although there have been no accidents of injuries stemming from this issue.
Advertisement

Fiat Chrysler has issued a voluntary recall of roughly 75,000 examples of the Dodge Charger and Chrysler 300 – all of which are equipped with all-wheel drive – over a concern that the front driveshaft bolts could work themselves loose. This recall will officially begin on or around March 31st and when it does, the work will be performed free of charge.

AWD Charger, 300 Recall
The 2014 through 2017 Dodge Charger and Chrysler 300 sedans are offered with an optional all-wheel drive system, which is only available with the Pentastar V6. While analyzing recall data from the past few years, FCA has found that the front driveshaft bolts on these all-wheel drive sedans could work loose over time. Should enough of the bolts loosen up, the driveshaft could begin to wobble and – in the worst case scenario – the driveshaft could disconnect from the transfer case or the different.

These cars all have a live front axle disconnect setup, so the all-wheel drive system activates automatically in both the Charger and 300. Because of this, there is no way to disable the front-drive system and should the driveshaft bolts fail while the AWD system is engaged – the driver would lose the power to the front wheels. It would also make a great deal of noise as the front driveshaft tumbled out from under the car and once it is out, the vehicle will be inoperable.

The good news is that there have been no reports of any accidents or injuries stemming from a front driveshaft bolt failure in any 2014-2017 Dodge Charger or Chrysler 300 sedans, but to make sure that there are no problems going forward – FCA has made the call to get these cars back to the dealership for a quick fix.

To fix this looming issue with the all-wheel drive Dodge Charger and Chrysler 300, the dealership will replace all eight of the driveshaft bolts on the front axle assembly and at the front of the transfer case. This work shouldn’t take very long, nor will it cost the owner anything.

While many vehicle owners blow off recall notices, this is one that Charger and 300 drivers will not want to ignore. If the front driveshaft works loose and comes free at either end, it won’t be so much of a safety issue as it will likely do a ton of damage under the vehicle. With this in mind, when this recall officially begins next month, owners of any AWD Chargers or 300s should make sure to have this free service performed.

Erik Sandeffer wrote on May 14, 2019 - 11:09pm Permalink
I just bought a used 2010 Chrysler 300 Touring. Driving down a long straight road about 40 miles MPH the driveshaft bolt broke at the transmission… I wonder if I’m covered under the recall because I can’t find the bolts anywhere
james wrote on February 17, 2020 - 7:39pm Permalink
unit needs replace, dodge charger uses the same parts in fack u can swap parts, i have 500 + error codes say front wheel discontect low voltage probem is not the plug prob is modual its self and its on lot diffrent cars, it can cause all kinds of probemems , now big quistion is is this a ghost code a code that is not real or is mod really bad well looking at all the people who swich it out i say its the mod going bad, and at 256.00 not cheap fix and u dont know if will fix the probem, fack is same parts used on so many diffrent cars yeat the recall dose not span all cars, this is what i dont get , and perifck exapample is my ault recall on all them month befor mine was built and because was built mouth after was not in recall, now get this, in order to get cover in recall i have get car to dealership and get them say that ault is same part of recall and that has same probem and from what i was told dealerships dont talk to them that pay for these things, so idk