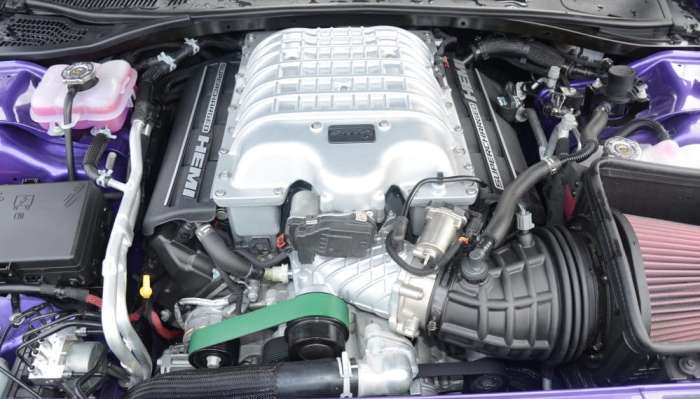 The 2019 Dodge Challenger SRT Hellcat Redeye will feature a stronger green supercharger belt in order to meet the extreme duty cycle of this 797-horsepower Hemi – a first for the factory-supercharged Dodge muscle cars.
Advertisement

I have spent the past week driving the 2019 Dodge Challenger SRT Hellcat Redeye and it has been nothing short of awesome. My daily driver is a 2017 Hellcat Challenger with 707(ish) horsepower, so going back and forth between that and the 797-horsepower Redeye has given me a great chance to really experience the differences on a head-to-head basis.

I will talk more about my time with the Redeye later on, but while I have had the car, I have taken it to a handful of car shows. I love being able to show off a car that isn’t available, as it gives large numbers of people a chance to check out the car in person. Surprisingly, one of the most common questions that I received was one that I could not answer.

Why the Green Belt?
Many people wanted to know what it had a green supercharger belt. The non-Redeye Hellcat in the Challenger, Charger and Jeep Grand Cherokee Trackhawk has a black belt and the 840-horsepower Demon, which shares the Redeye engine, has a black belt. On the other hand, many modified Hellcats, Trackhawks and Demons have gone to the green belt, leading many people to question whether this car was truly stock.

Having been asked so many times, I reached out to FCA to ask about the green belt and they were quick to reply.

“The Challenger SRT Hellcat Redeye will be produced with the unique belt that you saw on your press fleet car,” said a Dodge representative. “The belt is designed to meet the duty-cycle requirements of this ultra-performance muscle car.”

Why the Redeye?
Since the 2019 Dodge Challenger SRT Hellcat Redeye shares an engine with the 2018 Challenger Demon, many people are likely to wonder why it didn’t get the green belt. I can only guess on that question, but with that car being more track car and the Redeye likely spending more time as a daily driver, it is likely that the SRT engineers went with the green belt on a car that is likely to see more mileage in varying conditions.

DeanMcManis wrote on September 21, 2018 - 7:40pm Permalink
This is what "green" technology means to the Hellcat engineers.