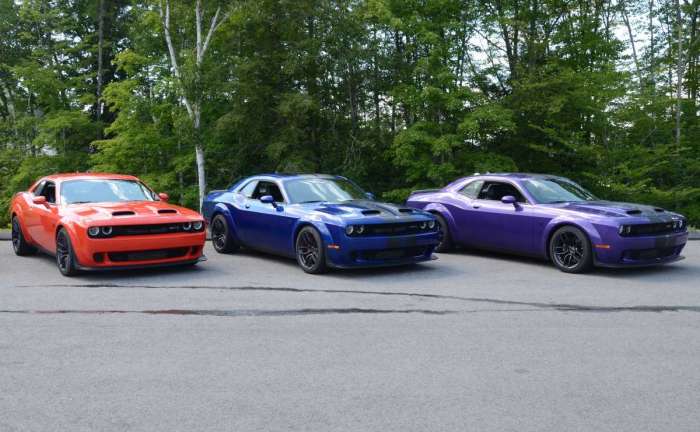 The 797-horsepower Dodge Challenger SRT Hellcat Redeye officially went on earlier this summer with the promise of deliveries starting in the fall and with the cooler temperatures setting in across America, the newest monster muscle car from FCA should be hitting dealerships soon.
Advertisement

The 797-horsepower Dodge Challenger SRT Hellcat Redeye officially went on earlier this summer with the promise of deliveries starting in the fall and with the cooler temperatures setting in across America, the newest monster muscle car from FCA should be hitting dealerships soon.

Dodge just keeps on introducing high performance muscle cars that raise the bar for the segment. The 707-horsepower Hellcat started the Mopar power parade back in late 2014 for the 2015 model year with both the Challenger and Charger. Over the course of the first three years of Hellcat sales, more than 30,000 examples of the supercharged Mopar machines had been sold. At that point, the 840-horsepower, limited edition Demon was introduced as the most powerful muscle car ever and the most powerful American road car ever, but with those cars being limited to just 3,300 units and one model year, they were gone as quickly as they arrived.

The Redeye is Coming
Dodge has followed up that limited edition Challenger with the Hellcat Redeye, incorporating the interior and exterior features and options of the SRT Hellcat package with a 797-horsepower Hemi, similar to the one offered in the Demon. The Redeye is a full volume production model, so the company will build as many as they can sell and based on conversations with many people who ordered one – the Redeye will lead to another big spike in supercharged Challenger sales.

For many of the people who are going to own a Dodge Challenger SRT Hellcat Redeye, they ordered the car in late June or early July, meaning that they have waited for a couple months now. Fortunately, information from FCA corporate and FCA dealership representatives suggest that the first Redeyes should be delivered later this month. Of course, that could always change, but right now, it looks like the 797-horsepower Challengers will begin hitting the street within the month.

The New King
When the 797-horsepower Dodge Challenger SRT Hellcat Redeye hits the street, it will be the most powerful American road car on the market. Right now, the 755-horsepower Corvette ZR1 holds the title of the most powerful American road car, but when the Hellcat Challenger Redeyes arrive, the Corvette will be dethroned by the brawny Mopar muscle car.

It seems likely that the new GT500 will have more powerful than the “regular” Hellcat, but it seems unlikely that Ford’s promise of at least 700 horsepower from the new Shelby Mustang will actually turned out to be 800 horsepower, as that is what the GT500 will need to adequately challenge the Redeye.

Of course, once deliveries of the Dodge Challenger SRT Hellcat Redeye begin, we will have a report with official information, but right now, it looks like the first units could arrive in September or early October.