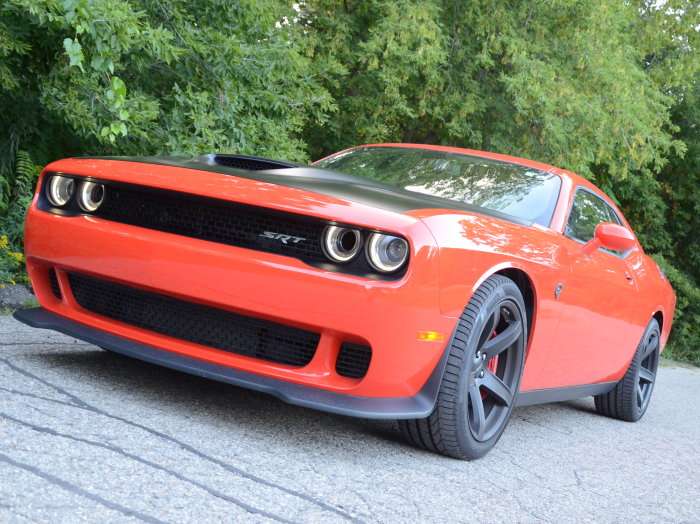 The Chevrolet Camaro ZL1 has a slightly lower starting price, but the Dodge Challenger SRT Hellcat still leads the American premium performance market in bang-for-the-buck – costing less per horsepower than any of the other big-power models from Detroit.
Advertisement

When the 2015 Dodge Challenger SRT Hellcat was introduced, there were two specifications that made it so popular – it had 707 horsepower and it had a starting price below $60,000. At that time, the supercharged Challenger was unrivaled in the muscle car segment and the only American competitor was the Corvette Z06, which car considerably more.

Since then, the Hellcat Challenger has gotten a bit more expensive and the new Chevrolet Camaro ZL1 has been introduced with its own supercharged V8. More importantly, the Camaro has a lower starting price than the Challenger, but when it comes down to dollars-per-horsepower – the Hemi-powered Dodge still leads all of the other premium American performance cars.

American Premium Performance
Before getting into the numbers, here is a quick look at what I consider to be American premium performance. Of course, the supercharged Dodge Challenger SRT Hellcat and Chevrolet Camaro ZL1 are in this class, as are the Corvette Z06, the new Corvette ZR1 and the Challenger Demon. I have also included the Ford Mustang Shelby GT350 since it is the Motor Company’s highest performance muscle car, but I have not included the Ford GT due to the starting price of nearly a half-million dollars. I also have excluded the Dodge Viper, since it is no longer in production.

For each model, I have only picked the “base” version of the performance package, so the prices below don’t include any options and they all come with the standard manual transmission. The prices do, however, include Gas Guzzler Tax and destination fees, so these are technically the lowest prices possible before discounts and such.

Now, with the rumors that the upcoming Ford Mustang Shelby GT500 will have 770 horsepower and a price in the $75,000 range, the next super-Stang could make a run at the Hellcat and ZL1 when it comes to offering the most bang-for-the-buck, but right now, if you want the most power for your money – the Hellcat Challenger is still the best option among premium performance models.