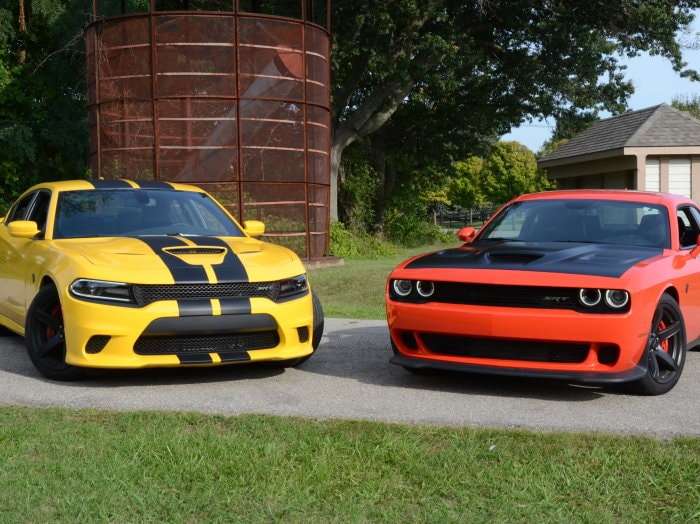 Dodge Challenger, Charger Hellcats are Faster than Supercars on a 2-Mile Run

A pair of videos showing the Dodge Challenger and Charger in SRT Hellcat trim hitting 195 miles per hour on a 2-mile airstrip show that these Mopar muscle cars are more than just quarter-mile machines – turning in better top speeds than several supercars.
Advertisement

These videos show that even in a longer, straight-line race, the Hellcat twins can still hold their own against supercars.

These videos all come to us from the YouTube Channel of the Johnny Bohmer Proving Grounds – a company that uses the space shuttle landing strip in Florida to host safe, high-speed test sessions for those drivers with high performance cars. The length of the high-speed test runs vary from 1 mile to 2.3 miles, but the Hellcat cars in the video below are all making 2-mile passes – as are the other vehicles being compared.

Dodge Muscle on the Airstrip
The first two videos that we present to you show a pair of Dodge Hellcat cars – one Challenger and one Charger – making 2-mile top speed runs. The Challenger hits 195.244 miles per hour while the slightly heavier, yet more aerodynamic Charger hits 195.796.

Finally, a 2015 McLaren 650S hit 195.605 in the half mile, so it was slightly faster than the Challenger, but slightly slower than the Dodge Charger.

In short, even if the race is a whole lot longer than a quarter mile, either of the Dodge Hellcat cars will hold its own in a drag race with some very impressive supercars – including the mighty Viper.