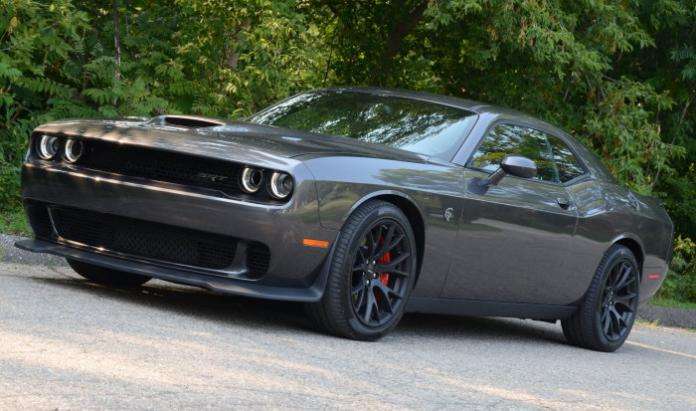 The Dodge Challenger is the most powerful car sold in the USA and during the month of June 2017, Mopar’s muscle car was the bestselling sporty car sold in America – beating the Ford Mustang, the Chevrolet Camaro and every other 2-door performance car in the market.
Advertisement

Over the past seven years, I have been covering muscle car segment sales, setting up a simple spreadsheet which has the monthly sales numbers for the Dodge Challenger, the Ford Mustang and the Chevrolet Camaro. Each month, the car which leads the segment in sales has its number highlighted in red while the second place car is highlighted in green and the number for the third place car remains white.

During those seven years, the Ford Mustang and the Chevrolet Camaro have taken turns leading the segment from month to month, with a great many red and green boxes in the spreadsheet columns for each of those vehicles. On the other hand, the column for the Dodge Challenger is most white with a few green cells scattered here and there along the way.

The Ford Mustang finished second in June 2017 sales with 6,186 units sold. The June 2017 number represents a big drop from the month before and from the same month in 2016, so it appears as though the “new model sales wave” which the Mustang has been riding since late in 2014 has lost its strength as numbers remain low through what had previously been peak sales months for the Ford pony car.

The Chevrolet Camaro had another awful sales month in June 2017, moving just 4,691 units. That number represents a drop of nearly 3,200 units from May 2017 along with being down around 200 units from June 2016. Camaro sales have been poor since the new model hit dealerships and while a jump in sales earlier this year gave some hope to Chevy fans hoping to see their favorite muscle car win the annual sales race in 2017 – the June drop seems to dose those hopes.

Halfway through 2017
With June sales on the books, the 2017 sales year is halfway over and once again, the Ford Mustang holds the lead in the annual race with a total of 44,608 units sold. The Chevrolet Camaro is in second place with 36,567 units sold and the Dodge Challenger is close behind in third with 35,910 muscle cars sold in the first half of 2017.

Realistically, it will be hard for the Challenger or Camaro to catch the Mustang in the annual race without some sort of massive spike in Dodge or Chevy muscle sales or a massive decline in Mustang sales. Neither of those situations are likely to happen, so it looks as though the Mustang will race to another annual muscle car title, but in the meantime, the folks at Dodge must have very excited that their muscle car – which hasn’t been completely refreshed since it was introduced for the 2008 model year – can still hang with the fairly new Mustang and Camaro in terms of monthly sales.

Steve wrote on July 5, 2017 - 11:18am Permalink
Hat's off to FCA, I'd credit their success to them producing a car that makes day-to-day ownership very rewarding, it's roomy, it sounds good, it's a viable all-season vehicle with AWD. I know GM is going to release a sheet metal update of the Camaro, which is about all they can do, perhaps they will make it distinct enough from the last two versions that it'll incite sales. The Mustang, would likely go on to lead the year without an update, however as the details of the 2018 filter out it's hard to believe the Chevy Camaro is going to hold on to anything but "smallest" car in this contest.
Armen Hareyan wrote on July 17, 2017 - 7:43pm Permalink
Hi Steve, Thanks for the comment. Hope all is going well.
Jeffery Reed wrote on July 5, 2017 - 4:59pm Permalink
I thing one of the things that has hurt camaro sells is the problems that they have had with them. I bought a as camaro new in 2014 stayed in the shop from day one drivetrain problems that they kept coming back with the normal sounds an pops I. The rear end lots of slack in both the trans an the rear end I lost a lot of money with the camaro but I see dodge has done good with there drive trains. Maybe they need to get with dodge an find out what went wrong with the camaro. The one I bought was 4u,000 an it's not worth but about 20,000 an you need to kind to get this car to do right as it should for what there asking for them you will have to put 20,000 in it after you get it there junk as there are. Just buy one an something go wrong with it take it back to the shop an a will give you the answer to the problem. Normal operating for a camaro.
Gary Hipps wrote on July 5, 2017 - 6:40pm Permalink
I bought a 6.4 challenger with supposedly 470 hp and I have had cars with 350 hp that would blow its ass away. I wish had bought a Chevy Camaro.
Robert Sinclair wrote on July 6, 2017 - 7:58am Permalink
You probably should of purchased a Chevy Cruze because you can't handle or know what horsepower is.
Anonymous wrote on July 6, 2017 - 8:39am Permalink
I find that very hard to believe!
Michael Yang wrote on July 6, 2017 - 9:15am Permalink
I'm a Mustang owner, so no loyalty to the challenger, except it is a fast car. Performance wise it matches the new Chevy Camaro well in acceleration, considering it weighs many hundred pounds more but only has 20 more crank hp. But seeing 11 second or less cars with 350hp is rare, so don't make claims suggesting it's a normal thing.
Brent wrote on July 6, 2017 - 9:29am Permalink
Probably don't know how to drive it. Bring it on over, will show you a thing or two, or maybe you got swindled and you ended up with an SXT with the 3.6 pentastar(which is still an outstanding engine, but no hemi)
Donald w Hayes wrote on July 5, 2017 - 9:41pm Permalink
It would be interesting to see what the incentives were on each car during this period. From memory. Ford (Mustang)and GM (Camaro) were not pushing large rebates as I remember Dodge doing with the Challenger
Anthony wrote on July 6, 2017 - 6:51am Permalink
The Ford Mustang and the Camaro are both steering away from their retro look which cause huge sales!!!! The mustang and Camaro are becoming Japanese looking!!! I have a 92 mustang and I love it. Ford was doing well until its new rice racer look. The retro look for the challenger works!!!!! And will work people want that. Sorry but ford and chevy better wake up because they are not creating future classics !!!!
Jeffery Brown wrote on July 6, 2017 - 9:16am Permalink
Chevy Camaro mistake is the 2 litter turbo nobody but nobody wants s 2 liter muscle car
Charles wrote on July 6, 2017 - 9:21pm Permalink
I love the Dodge,it just looks so awesome,I will buy a Hellcat,or a Demon if they are not sold out. The Challenger still looks like a real car.
mike wrote on October 7, 2017 - 4:51pm Permalink
I have a 2014 GT and I put a Kenne Belle supercharger on it with a host of other upgrades. I'm a Ford guy and we used to have the perennial Ford-Chevy-Dodge battle until later I found out that it is stupid. All three cars are excellent and Germany loves the Mustangs and the Challengers and In China the Camaro is doing well with the rich kids.These three cars are a bargain and the fact that we have them,make all three manufacturers keep on their toes. I would love to have one of each and especially the Hemi Challenger but I would have to hit the Lotto jackpot. haha