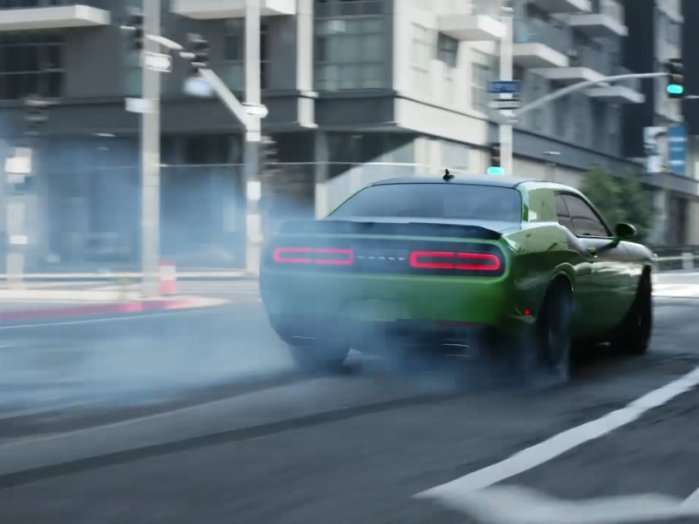 The Dodge brand didn’t have a commercial aired during Super Bowl 52, but the Challenger and Charger were well-represented in a new NFL-themed spot that went live on the brand’s YouTube channel ahead of the big game.
Advertisement

FCA was the most active automaker in terms of commercials aired during last night’s Super Bowl 52 between the New England Patriots and the Philadelphia Eagles, with five new spots making their TV debut. None of those new commercials mentioned the Dodge brand, but America’s favorite rear-wheel-drive lineup was nicely featured in a spot that debuted the day before the NFL championship game and in fine modern Dodge fashion – this commercial is a bit brash and it is chock full of muscular machines action.

So, while this technically wasn’t a Super Bowl ad since it didn’t run during the Super Bowl, it is obviously referencing the big game in a humorous fashion.

Empty Streets, Game Day
The Dodge almost-a-Super Bowl commercial is titled Empty Streets, or Game Day, or Both. We don’t know, but it doesn’t really matter. It starts off surprisingly soft for a modern Dodge commercial, talking about how great football is and how wonderful it is that the Super Bowl brings people together to cheer for their favorite team – or in the case of this year’s game, to root against the Patriots.

The commercial shows people from all walks of life coming together to watch football, eat and generally have a nice time with friends and family. However, it points out that with all of these people gathered around the TV to watch the Super Bowl, the streets are empty. This allows those folks who aren’t watching football to go out and participate in some high-performance driving fun with their muscle cars – in this case, the Dodge Challenger and Dodge Charger.

The commercial ends with a Dodge Challenger T/A, a Dodge Charger Daytona and a Dodge Challenger SRT Hellcat drifting around an empty city, doing things that would realistically get you arrested if you tried this in real life. However, for the sake of a commercial with the “don’t try this at home” disclaimer, this footage makes for another great Dodge commercial.

The Street were Empty
While I happily watched the New England Patriots lose Super Bowl 52 last night with the rest of the world, I had to run out during halftime and I was amused to find that the streets of Metro Detroit were pretty much empty. Mind you, it may have been due more to the fact that it snowed hard just before game time, but in any case, I enjoyed my jaunt in the snow on the empty local streets with my Hemi-powered pickup truck.

Anyways, if you haven’t seen the Dodge Super Bowl-themed ad, you can check it out below.