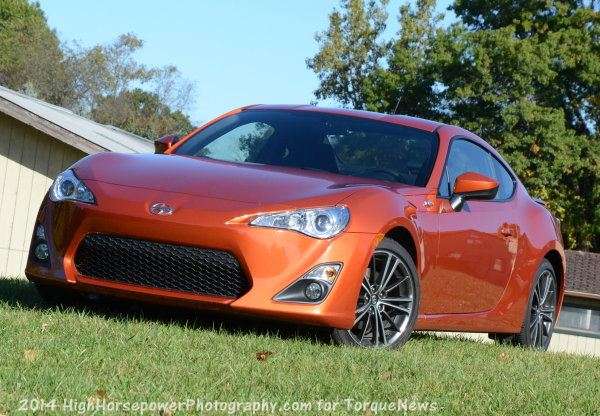 I recently spent some time driving the 2014 Scion FR-S and while I can see some room for improvements, I really enjoyed the svelte rear drive sports coupe – and I think that both Chevrolet and Dodge could use a car like this in their performance oriented lineup.
Advertisement Chevrolet and Dodge don’t need to offer a smaller, lighter version of the Camaro and Challenger to compete with the Scion FR-S; they need a small, affordable sports car that is fun to drive. Both the Camaro and Challenger do a beautiful job of meeting the needs of those who want a big, powerful muscle car and while these muscle cars have seen their handling capabilities improve a great deal in recent years, they don’t offer the same light-on-their-toes handling of the FR-S. The sporty Scion coupe won’t keep up in a straight line with even the base model Camaro or Challenger, but for the price, you just can’t get a Camaro or Challenger that offer the same corner-conquering capabilities of the FR-S.
Chevrolet and Dodge shouldn’t try to create a Camaro or Challenger that will offer the wonderful attributes of the Scion FR-S. Instead, those American automakers need to offer up a small, nimble sports car that won’t keep up with any of their larger muscle cars in terms of power or all out acceleration, but that will allow the rocker-rubbing fun that you get with the FR-S.

The Only Downside to the Scion FR-S
I honestly find the Scion FR-S to be one of the most entertaining driver’s cars sold in America today. The FR-S hugs the road in almost any cornering situation and it offers the same glued-down driving characteristics in tight quarters and when soaring at high speed on the open road. The one thing that the FR-S does not do well is lay down incredible straight line acceleration due to the relatively low power ratings and if there was anything that I would change about the Scion FR-S, it would be to pile on a little more power. This lack of power – not the lack of a V8 – is what ultimately prevents the FR-S from making a real run at the American muscle cars, but not everyone wants a car that will blast down the quarter mile. Some people want a car with a lower purchase price, a more nimble road feel and – surprisingly – better fuel economy and that is where Scion offers something that you cannot get from Chevrolet or Dodge. Yes, you can get into a V6 powered Chevrolet Camaro or Dodge Challenger for same relative price as the Scion FR-S and those V6 muscle cars will unquestionably stomp the FR-S in a drag race, but the entry level muscle cars just don’t offer the same fun to drive cornering as the sleek little Scion.

Where the Scion FR-S Shines
As mentioned above, the Scion FR-S is one of the best handling cars sold in America and it offers this high level of fun to drive factor with a price starting at just $24,700 and reaching up to just under $29,000 with all of the bells, buzzers and TRD parts that were found on my FR-S test car. You cannot buy a Chevrolet Camaro or Dodge Challenger that offer as much driving excitement as the FR-S for that price, nor can you get the optional features of my test car on either of those muscle cars for those prices. While I wish that the Scion FR-S had a little more punch to it, there is no question that it is a ton of fun to drive. My test car had the 6-speed manual transmission, which allows you to keep the revs nice and high for optimal performance while slamming from gear to gear. In every way other than pure acceleration, the FR-S feels exactly how I want a sports car to feel. The super low seating position and the way that the interior wraps around the driver’s seat leave no guessing that this car is built for performance. The low riding stance of the FR-S gives it the perfect sports car posture while also creating a very low center of gravity. When combined with the near perfect front-rear weight distribution, this suspension setup affords the FR-S incredible cornering in tight turns so when you are in close quarters, the FR-S feels as nimble as any small car on the road today. The chassis and suspension setup also affords the FR-S incredible stability at very high speeds so while the 200hp engine might take some time to get the Scion sports coupe up to 100 miles per hour, it is incredibly well planted to the ground at those high speeds. Also, the race inspired seats are comfortable while also keeping you firmly in place under hard cornering…and they look great, too. Will Chevrolet and/or Dodge Come Up with an FR-S Competitor?
For years now, the Chrysler Group has played around with the idea of a smaller rear wheel drive sports car, including models like the Dodge Razor and the Dodge Demon Concept. Unfortunately, there is no intent to bring out anything like these models in the near future, but considering that parent company Fiat worked with Mazda to create the new Miata (via Alfa Romeo), I suppose that there is a slight chance to see a small, efficient and affordable sports car to compete with the Scion FR-S down the road. Also, it is all but official that there will soon be a new Dodge Dart SRT with a turbocharged 4-cylinder engine and should the new Dart SRT follow the direction of the old Neon SRT4, Dodge lovers could have a small, affordable performance car below the Challenger that would offer the same fun to drive factor as the Scion FR-S. As for Chevrolet, there have been rumors for a couple years now that GM is indeed working on a small sporty car that is based on the 2012 Chevy Code 130R Concept from the Detroit Auto Show. That concept was a small rear wheel drive model powered by a turbocharged 1.4L engine that could provide the added punch that the FR-S needs. While these are nothing but unsubstantiated rumors, the Code 130R Concept is proof that the General has at least looked at building a proper FR-S fighter.

Why I’m Not Including Ford on this List
While I did mention the Mustang above, you might notice that I’ve not called for Ford to build a car similar to the FR-S of their own. That is because Ford already addresses the need for a small, efficient sports car, but Ford takes a very different approach. Rather than challenging the FR-S in the rear wheel drive compact sports car segment, Ford offers both the Focus ST and the Fiesta ST. Those cars are both a total blast to drive, even though they are both front wheel drive models so those folks who want a fun, efficient and less expensive sporty Ford than the Mustang can opt for either of the ST models. Ford fans have a real option for a performance car that is smaller, more efficient, less expensive and more nimble than the base model Mustang, but Chevy and Dodge fans do not right now. There is clearly a market for a smaller-than-a-muscle car performance model, but right now, you cannot buy a sporty model from either Chevrolet or Dodge with such strong handling, strong fuel economy and a low price like the Scion FR-S. It might not pack the power of the muscle cars, but the FR-S is dollar for dollar more fun to drive than anything in a similar price range from those two top American performance car brands.

Carl wrote on October 24, 2014 - 10:28am Permalink
What do you think would happen if they put the same turbo in that's in the WRX or Forester? (Since, let's face it, an FR-S is a BRZ.) I know someone who turbo'd his BRZ up to 300hp at the ground. It actually ended up being TOO powerful for him - so if they put more engine in it, they need to re-tweak the whole car to handle it.
Austin F. wrote on January 18, 2015 - 2:10am Permalink
quite a great point, I love the concept of the FR-S/BRZ but i cant get over the over popularity of them i see them every day and that isnt something i would want to contribute to, if dodge or chevy did make a small RWD sports coupe that would really be great. also how is this compared with the miata, does it feel faster, more planted, there are pretty much no direct comparisons of the miata vs the frs