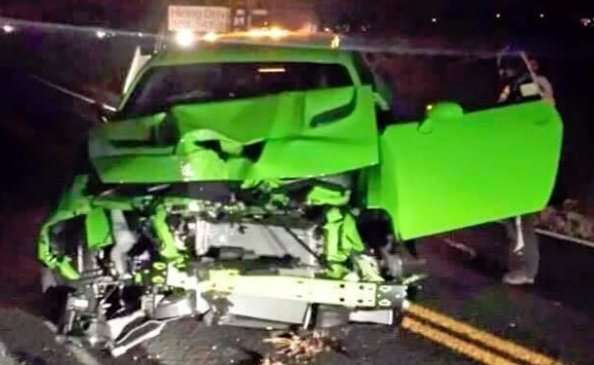 An image flooded the social media world this weekend showing a 2015 Dodge Challenger SRT Hellcat badly wrecked and while some people insisted that this was a hoax – it is unfortunately very real, as details on the accident have finally surfaced online.
Advertisement

This past weekend, the image above popped up across Facebook and Twitter, showing what appears to be a very badly wrecked 2015 Dodge Challenger SRT Hellcat. Some commenters were skeptical, insisting that the image was somehow a fake, but it has been confirmed as the real deal via a Colorado State Police accident report.

The First Destroyed Hellcat Challenger
The first 2015 Dodge Challenger SRT Hellcat to meet its demise on the open road was owned by 34 year old Lance Utley of Winter Park, Colorado. Reports indicate that Utley had purchased his new 707 horsepower muscle car late on Friday afternoon, and it was the first Hellcat Challenger delivered in the state of Colorado. Shortly after Utley left the dealership in the most powerful muscle car ever sold in Colorado – the car was destroyed.

According to the Colorado State Police, Utley was driving along a rural two lane road with two passengers in his SRT Hellcat Challenger when he lost control of the car. The car originally headed to the right, and while Utley was able to correct the problem for a second, he overcorrected and shot back across the road. After sliding through the empty oncoming lane, the Challenger slammed into a tree and the result was the image above.

Fortunately, neither Utley nor his passengers were injured, but it looks like his Dodge Challenger SRT Hellcat might be dead.

No Booze, No Excessive Speeds Needed
While the Dodge Challenger SRT Hellcat was likely damaged beyond repairs, the important part was that no one in the car was injured. The police clarified that no drugs or alcohol were involved and reports point out that there was no mention of excessive speeds. Having driven a few Hellcat Challengers, I suspect that Utley wasn’t going very fast – he just got too far into the throttle on a 30 degree evening and the Challenger turned into a rolling burnout machine that hurdled head-long into the trees.

When I last drove the 2015 Dodge Challenger SRT Hellcat, I did so on clean, dry roads on an 80 degree day. The conditions couldn’t have been any better when I was driving the 707hp Challenger on the road or on the track. Even with those ideal conditions, a little too much throttle would get the back tires spinning in a hurry and when they get spinning, they want to bring the back end around just as quickly. Even when rolling along at 55 miles per hour on the highway, hammering the throttle will get the tires spinning in the 700+ horsepower mode. The Challenger has stability control and traction control systems that step in right away, but those features can easily be turned off for track-type performance.

If Utley had turned off any of the helpers and goosed the throttle a little too hard for the cold tires and cold road surface, I can see how the Challenger SRT Hellcat could get the back end out right away. From there, it was up to the driver to pull in the reins and when that didn’t happen – the Challenger slammed into a tree and mangled the brand new muscle car.

You don’t need to be drunk or driving at 120 miles per hour for the 2015 Dodge Challenger SRT Hellcat to get out of hand and hopefully, this first accident will serve as a stark reminder to owners who are taking delivery of their cars during this cold winter weather. Be careful out there, Hellcat drivers.