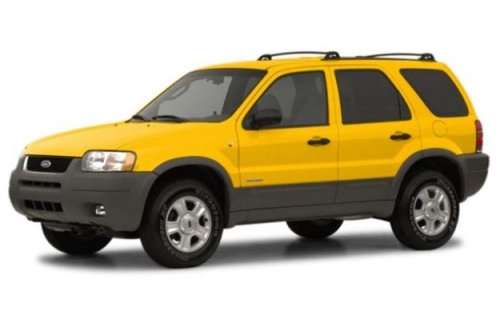 Last week we brought you the news that the Center for Auto Safety was demanding that Ford Motor Company recall select Ford Escape SUVs that had been previously recalled to address a new unintended acceleration issue and now, the CAS is pushing to have the similar Mazda Tribute recalled for the same problem.
Advertisement

The Center for Auto Safety originally began pestering Ford Motor Company to recall 406,863 Ford Escape sport utility vehicles from the 2002, 2003 and 2004 model year over a concern that these vehicles could exhibit the dreaded unintended acceleration after being serviced as part of an older recall from 2004 but the safety watchdog group is now demanding that the Mazda Tribute be included in this recall-recall. The 2002-2004 Mazda Tribute is mechanically identical to the Ford Escape and, like the Escape, the Tribute was recalled in late 2004 over a concern that the accelerator cable could become dislodged and as a result, unintended acceleration could occur. Click here for a look at the recall demands around the 2002-2004 Ford Escape.

However, the Center for Auto Safety claims that the cruise control cable assembly of the Ford Escape and Mazda Tribute could easily be damaged during the recall repairs to the accelerator cable and the damaged cruise control cable can also cause bouts of unintended acceleration. The CAS claimed that of the 406,863 Ford Escapes repaired under the 2004 recall order, roughly 320,000 were serviced and could be subject to the new form of unintended acceleration from damage sustained to the cruise control cables. This new claim adds roughly 85,000 Mazda Tribute SUVs to the 320,000 included in the CAS’ early recall demands.

One of the key reasons that the Center for Auto Safety is so insistent on Ford Motor Company (and now Mazda) recalling these previously recalled vehicles stems from a bulletin sent by Ford to their dealerships. This letter came out months after the recall had begun and it instructed dealership technicians to be especially careful with the cruise control cables when servicing the accelerator cables that were the cause for the first recall in 2004. Since Ford seemingly acknowledged that there could be an issue but no further actions were taken for those vehicles repaired under the recall prior to that bulletin being sent out. However, Mazda sent out no such bulletin to their dealerships so the CAS believes that the Mazda Tribute is even more likely to face these new unintended acceleration issues.

Unfortunately, the cause for all of the interest around the Ford Escape and Mazda Tribute models recalled in 2004 stems from an accident earlier this year when 17 year old Saige Bloom’s 2002 Ford Escape exhibited unintended acceleration in Arizona – leading to the 17 year old girl’s death. This vehicle had been repaired in 2005 under the original recall and during the investigation following the fatal accident – investigators found that the cruise control cable was jammed against the engine cover, causing the Escape to accelerate on its own.

Ford Motor Company and Mazda are both working to conduct their own investigations to determine whether or not the claims by the CAS are legit but based on the success of the CAS in the past along with the number of complaints about both vehicles experiencing unintended acceleration – Ford and Mazda will need to show that it is 100% not possible if they wish to avoid another massive (and costly) recall.

Thrdchance wrote on December 11, 2012 - 5:26pm Permalink
I have a 2003 Mazda Tribute which I purchased in November 2012. I contacted the agency which announces recalls on vehicles and found that my vehicle did not have the accellerator cable/cruise cable issue(s) was/were not completed. So, I took the vehicle to the mazda dealer as requested. I had the schroud raised as required by Mazda headquarters. However, in doing such it was discovered my cruise control cable was damaged and needed replacement - which explains why my vehicle would not ingage when I pushed in the cruise control button. - however, let me explain further. When I first tried the cruise control the cable was taken off the accellerator connection. So, I attached it and when I used the crusie control the engine would not drop down to normal speed and was at a 1700 rpm as I stood on the breaks and turned the vehicle off. At that time, I removed the cruise control cable off its connector as it was originally found. Now, when I asked the dealership (serviced dept rep) if that is part of the recall she said no and that in order to repair it, it would cost me around $100. I declined and ordered the actuator from Ford Motor Co., because Mazda no longer has this cable available; I will add the actuator cost $15 more from Ford then from Mazda. I ordered the cable and the problem is not solved. Now my cruise wont even work - Great Going Mazda :( What can I do now :(