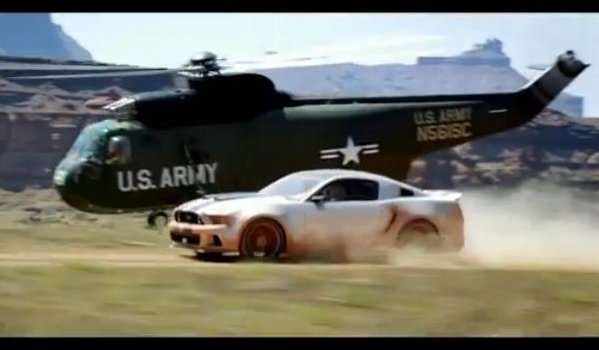 The first trailer video for the 2014 action/racing flick Need for Speed has hit the internet, giving us our best look yet at the customized Ford Mustang that will serve as the hero car for the movie along with plenty of fast paced action from the video game turned big screen feature film.
Advertisement

We found out a couple months ago that the Need for Speed video game series had been transformed into a full length movie set to launch in 2014 and we also learned a while back that a super modified 2014 Ford Mustang would serve as the hero car in this fast paced action flick. The 2013 and 2014 movie world has been chock full of driving/racing movies including Snake and Mongoose, Rush and The Getaway but the Need for Speed movie will likely offer the most wow factor with the high number of high performance, high dollar cars used in the game-based movie. Also, the millions of copies of Need for Speed sold over the past decade could help this racing movie succeed compared to the others since there are so many Need for Speed fans (like myself) who will see the movie simply because they (or we, as the case may be) love the game series.

The first Need for Speed trailer offers us about 90 seconds of movie footage but this short series of clips provides a very good idea of what to expect when the movie launches around the country on March 14th 2014. We get a nice collection of clips of the 2014 Ford Mustang hero car being driven by Breaking Bad’s Aaron Paul, who plays the role of an ex-con street racer immersed in a cross country street race against some of the most powerful cars in the world. This short trailer for Need for Speed not only shows the Ford Mustang that plays the most prominent role but we also see some of the Mustang’s competition including the Bugatti Veyron Super Sport, the Lamborghini Sesto Elemento, the Koenigsegg Agera, the Saleen S7, the McLaren P1, a Koenigsegg CCR-X and some other supercars that are going so quick that we cannot identify them from this short video. Of course, the Need for Speed movie includes a whole bunch of police vehicles including the older Crown Victoria, the new Taurus SHO based Police Interceptor and the Dodge Charger Pursuit that work in conjunction with various airborne police in helicopters to take down the street racers.

Finally, this first Need for Speed trailer shows that the movie will include enough of a love story for girls who are attending with their husbands or boyfriends to have something to follow while the men are dreaming about being the lucky guys racing all of these high dollar supercars. It looks like Aaron Paul’s character loves a hot blonde chick who is killed and that is why he is racing or something along those lines…but who really cares...this movie is about racing!

Joining the Breaking Bad star is Michael Keaton…the man who formerly played Batman and Beetlejuice. When you take into account the fact that this movie has one of the stars of the popular TV show Breaking Bad, a long list of the world’s most incredible sports cars, hot girls, fast paced racing (and wrecking) action, predictable movie violence AND Beetlejuice – this movie should be the blockbuster of the driving and racing movies for the upcoming year.