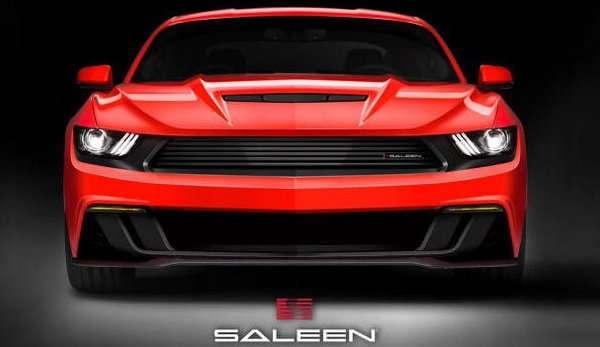 Last week we brought you the first look at the 2015 Ford Mustang that has already been redesigned by the folks at Saleen, but after seeing the 2015 Saleen S302 Mustang, critics all over the internet are crying foul because they believe that this aftermarket package makes the next generation Mustang look too much like the current Chevrolet Camaro.
Advertisement

The folks at Saleen have become well known for super-tuning the Mustang with incredible success so it comes as little surprise that the first heavily modified 2015 Ford Mustang comes in the form of the new Saleen S302. We can expect that in addition to the unique exterior design shown from the front end above, the Saleen S302 Mustang will come with some big performance adding features that will allow Saleen to keep their Mustang at the front of the tuner market with power numbers that could challenge the new Dodge Challenger SRT Hellcat. However, without any concrete details on the Saleen S302 version of the 2015 Mustang, the discussions around the automotive world can only focus on the front end picture – one which many people insist looks a great deal like the current Chevrolet Camaro.

The Similarities are All in the Grille
The 2015 Ford Mustang has a face that has caused a great deal of controversy over the fact that the front end wears a shared design with the current Ford Fusion. These similarities to less exciting models has cause some Mustang fans to dislike the new front end and perhaps with the fury created by the front end fresh in their minds, the people at Saleen designed a front fascia that is very much unlike the standard 2015 Mustang face. However, in removing the look of the 2015 Mustang, some people believe that too much inspiration was borrowed from the current Chevrolet Camaro. Like the GM muscle car, the Saleen S302 front end has a grille section that runs from headlight to headlight with the blacked out grille detail presenting a very similar look. The 2015 Ford Mustang turned Saleen S302 also has a more pronounced raised center section through the middle of the hood, which is somewhat similar to the current Camaro SS. Where the Camaro has slotted vents, the Saleen Mustang has a front mounted hood scoop but there is no question that the Saleen hood takes the styling a touch closer to the Camaro end of the spectrum. This is a subtle similarity, but when combined with the side to side black grille treatment, I can definitely see the Camaro-like qualities of the Saleen 302 Mustang.

Both Parties are Unhappy with the Similarities
Not surprisingly, both fans of the Chevrolet Camaro and the Ford Mustang are disgruntled with the similarities between the Saleen S302 Mustang and the normal production Camaro. Mustang fans are annoyed that the well known Mustang tuner Saleen would make a high end Mustang package that would cause it to look like the hated Camaro. Ford fans don’t even like GM fans talking about how the Saleen Mustang looks like the Camaro. On the other hand, Camaro fans are mad that Saleen is trying to steal the look of their beloved GM muscle car.

The only people who are likely happy with this first image of the 2015 Saleen S302 Ford Mustang are those who refuse to embrace the changes made to the face of the S550 Mustang. There are some folks who passionately hate the similarities between the new Mustang and the Ford Fusion, so to those folks any change is good change. However, I expect that the numbers of people who hate the new Mustang will quickly dwindle once the new models arrive – in the same way that the negativity about a new look has faded when each of the past few generations were introduced.

More Images Should Lead to Less Comparisons
While I can see what those who are unhappy with the “Camaroness” of the 2015 Saleen S302 Ford Mustang, I believe strongly that more images of the new Saleen Mustang should put to sleep any complaints of the super-tuned Ford pony car looking too much like the Camaro. Once we get a look at this front end from more angles along in addition to the Saleen S302 from the sides and rear – I expect that we will all see that the 2015 Mustang turned Saleen 302 doesn’t look all that much like the 2014 and 2015 Camaro.

While the grille might be somewhat similar, we can expect these two cars to look very different when parked side by side in the real world.

Don wrote on July 8, 2014 - 12:06am Permalink
Yes there is a resemblance to the Camaro, but in the case of the 2015 Mustang that is an improvement as the stock 2015 Mustang front end looks to much like an Ford Fusion with a pony slapped on the J.C. Whitney grill!
2007GT/CS wrote on July 8, 2014 - 12:16pm Permalink
I couldn't disagree more with the Camaro comments. How are they similar? They both have headlights, turn signals, a grille, and a hood. If the Saleen comes up behind me on the freeway, I'm not going to think "Here comes a Camaro"... The only thing I find even the slightest bit "Camaro-ish" is the rear of the headlights being swept upward to a sharp point as they wrap around the side of the fender (but that's production Ford). The Camaro nose has more paint on the bumper, a smaller upper and lower grille, fog lights, an angled upper grille where the Saleen is flat at the top of the grille (the lower edge of the hood) and is slightly curved at the bottom. I do think it would have looked better if the Saleen's middle, painted bumper section was perfect flat on the top and bottom with parallel, straight/flat lines. I also would have painted the filler panels inside of the headlights on the Saleen. Unfortunately Ford screwed up doubly bad by cutting into the fenders with those horrible angles for both the headlights and taillights - it makes it more difficult for modifiers like Saleen or Roush to integrate truly great front and rear bumpers for this car. I've been saying the 2015 Mustang looks like a Fusion since the first day they released it, Ford (J Mays especially) should be ashamed of themselves for releasing such a cheap knockoff Fusion coupe (Fusstang)...
Greg wrote on July 11, 2014 - 10:00am Permalink
I also disagree. Saleen made the nose look like Mustang. The clean grill is great! I am extremely happy to see it. The Fusion nose really turned me off as well as I heard the 5.0 will not be direct injected (unless someone heard differently).
Chris wrote on August 17, 2015 - 1:13am Permalink
Not even a thought in my mind, I know its a Saleen Mustang. And if we get picky the camaro always waits for the Mustang to be released and follow in same direction. Mustang went retro, Dodge and Chevrolet followed suit.