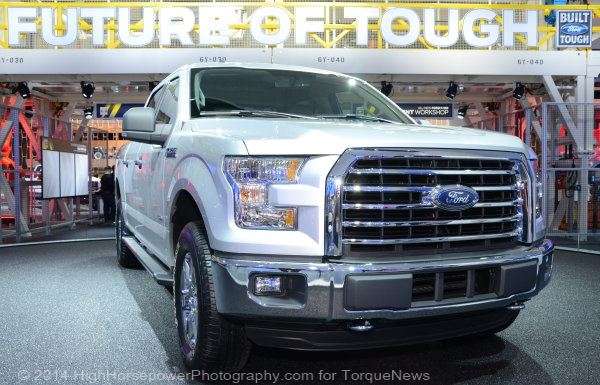 The final preparations for 2015 Ford F150 production is currently underway at the Rouge River Assembly plant and that means that the all-new F150 will be reaching dealerships soon, but even with all of the upsides of the lightweight half ton pickups, “expert analysts” continue to preach of the many downsides of the new aluminum body – all of which will be quickly forgotten once these trucks are in the hands of consumers around the US.
Advertisement

Since the 2015 Ford F150 was introduced at the 2014 North American International Auto Show in Detroit, the people around the auto industry who get paid to question the decisions of the automakers have been quick to declare the shift to aluminum to be a bad idea. They insist that aluminum isn’t strong enough and that when it gets damaged more quickly than a steel body, it will also cost more to fix since working on aluminum bodies takes special tools and special training.

Ford Recorded Revenue of $147 Billion
In the 2013 calendar year, Ford Motor Company recorded revenue of almost $147,000,000,000 – that is one hundred and forty seven billion dollars. The F Series pickup is one of Ford’s most important models and the F150 is the top selling model within the F Series truck lineup. The reason that I bring up Ford’s revenue for 2013 and the fact that the F150 is one of the bestselling models is to show that the company has the money and the obvious desire to make sure that they aren’t making any catastrophic errors with the next generation F150. As a company with $147 billion in revenue, the company has plenty of money and plenty of technology to test new components (like aluminum body panels) with some of the most experienced engineers in the industry. Ford Motor Company could have spent $500 million dollars in testing and perfecting the aluminum F150 body panels with the best people in the industry and while there has been no dollar amount stated by Ford, you can bet your bottom dollar that Ford spared no expenses in redesigning the F150 pickup.

To suggest that a company with the resources of Ford Motor Company would have started building the 2015 F150 out of aluminum before testing for every possible downside is both foolish and naïve. It can be argued that few new models are more vital to the ongoing success of FoMoCo and building a next generation F150 that would be too weak to stand up to normal truck abuse would be a colossal failure for the automaker – a failure that they surely took extensive measures to prevent.

A Ford exec didn’t wake up one morning in early January and say “let’s make the 2015 Ford F150 out of aluminum”, only to have an engineer fabricate a quick aluminum body. Ford likely spent thousands of hours and millions of dollars making sure that these aluminum panels are every bit as tough as the old steel body panels.

The 2015 Ford F150 isnt the First Aluminum Vehicle
The fact that the 2015 Ford F150 will have a body comprised heavily of aluminum is a big deal because no consumer vehicle with this much popularity in the past has gone with such a high cost construction. Plenty of high performance vehicles have relied on aluminum over the years with great success and there are a variety of vehicles on the market already which use aluminum body panels without any problem. In fact, several previous F150 generations dating back to the 1997 models have had aluminum hoods, as have the Mustang and other vehicles from other automakers. The aluminum hood on the F150 and Mustang haven’t caused any durability issues over the years and we can expect that the aluminum alloy on the 2015 F150 has been perfected relative to those older models.

Also, there have been vehicles in the commercial market using entirely aluminum bodies for year – especially large delivery trucks. UPS has one of the biggest truck fleets in the world and their consumer level delivery trucks have been made from aluminum for years now without any real problem. If UPS trucks can stand up to the abuse, the better constructed 2015 F150 should have no problem being just as sturdy as the outgoing steel bodies.

Repair Costs are the Only Legitimate Concern
The only concern voiced by these obvious advocates of steel body panels that should be taken seriously is the repair costs of a damaged 2015 Ford F150. Right now, only a small percentage of body shops around the US have the tools and the experience to repair an aluminum body panel. However, with the F150 and the next generation Super Duty being made from aluminum, the bestselling vehicle in America for over 30 years will soon flood the market with aluminum bodied vehicles. At first, consumers with a wrecked 2015 F150 will have to hunt around for a small body shop to fix their trucks and that exclusivity will come with higher prices. However, over time, more shops will want to get in on the action of fixing the most popular new vehicles in America. As more shops begin offering aluminum work, prices will drop and due to the importance of the F150 in the American market, I expect this to happen very quickly.

Also, Ford Motor Company is working with dealerships to make sure that more of them are prepared to fix the aluminum F150. Between helping dealerships acquire the tools and making sure that there are guys in the body shop who know how to fix an aluminum F150, the automaker is helping more dealerships around the country prepare to fix the 2015 half ton pickup.

Early on, 2015 Ford F150 buyers might pay a little more to have their truck fixed when wrecked, but that will change quickly as both small body shops and dealerships alike hurry to keep up with the new technology – and as more and more shops have the ability to fix the 2015 F150 – the price of repairs will quickly drop.

Bob wrote on September 11, 2014 - 3:57am Permalink
"147,000,000" is 147 million. Correctly written 147 billion is 147,000,000,000. People don't pay for repairs. Insurance companies do. So insurance premiums will take into account the cost of repair. Ford says they have worked with insurance industry to ensure premiums will be very close to outgoing model. I think they have contracts with most major insurance companies to do the repair at the dealership at a significant discount.
Tom wrote on September 11, 2014 - 4:00am Permalink
You mentioned UPS uses aluminum body vehicles. I can one up you. The US Military uses aluminum body war vehicles (H1 Hummer! & others). Don't forget US Navy Destroyers have superstructures made from aluminum.
Jason wrote on September 18, 2014 - 12:38pm Permalink
Coal trucks have been using aluminum beds for how long now? Those hold up to abuse pretty well.