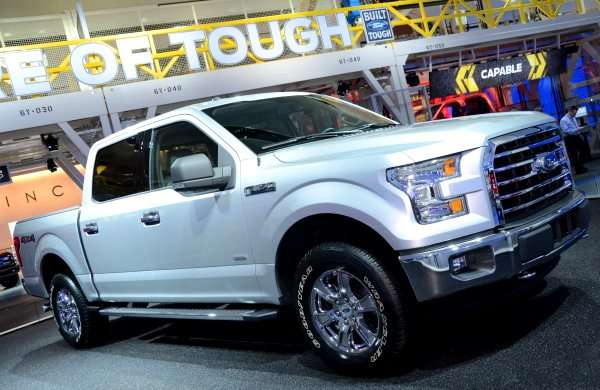 The Detroit Rouge plant is currently being prepared to build the 2015 Ford F150 so the cutting edge, next generation version of the bestselling vehicle in America is right around the corner – but some consumers could be waiting until 2015 before they get their hands on their new F150.
Advertisement

It has been widely expected that the 2015 Ford F150 would reach dealerships around the country before the end of the 2014 calendar year and in a recent letter to those dealerships, the first solid information on the arrival of the next generation F150 was detailed…at least a little. Unfortunately, this first bit of real arrival information on the 2015 Ford F150 isn’t as good as some devout F Series owners would hope.

First Units Will Arrive by Year’s End
First, the good news – the 2015 Ford F150 will appear in dealerships before the end of the 2014 calendar year. Ford’s collection of some 3,000 dealerships around the United States will have new aluminum bodied F150 pickups on their lots for test drives and for purchase “late this year”. This means that if you want a 2015 F150 and you expect to find your ideal truck in dealer stock, you should very likely be able to drive your new truck home before New Year’s Day.

The bad news is that if you want a unique configuration or an unusual color combination which would force you to fully order your own customized 2015 Ford F150, you could be waiting a few months into 2015 before receiving your new truck.
Custom 2015 F150 Orders, Fleet Orders Arrive in February

It seems that Ford believes that their most crucial group of F Series customers are those folks who will walk into a dealership and buy a 2015 Ford F150 right off of the lot. Really, if you walk into any Ford dealership in the country right now with expectations of buying a fairly common truck – like a 2014 F150 Lariat in Black with the EcoBoost engine and four wheel drive – there is a very good chance that you will find what you are looking for at almost any dealership. Fortunately for Ford, those are the kinds of trucks that sell best so the dealership strategy of ordering trucks with certain options works well enough to make the F Series the bestselling vehicle in America for more than three decades.

However, there are those buyers who will want a 2015 Ford F150 that deviates from the norm. Say that you wanted to buy a 2014 Ford F150 FX2 SuperCab with the 6.2L V8 in Race Red with no other options…that is likely not a truck that you would find sitting on a dealership lot – so this is the type of truck that you would have to custom order. Say that you wanted some other uniquely configured 2015 F150 that you aren’t likely to find waiting for you at a dealership, you would be forced to place a similar custom order. If you are one of the folks who had to place the custom order, your truck won’t be in your driveway until February 2015 at the earliest.

These custom ordered 2015 Ford F150 pickups will not be built until the Motor Company has built and shipped the first batch of trucks to fill dealership lots. This means that if you are a picky truck buyer, you will be waiting until at least February and if you don’t want to wait that long, you can adjust your expectations and prepare to go shopping for a truck already sitting on a lot.