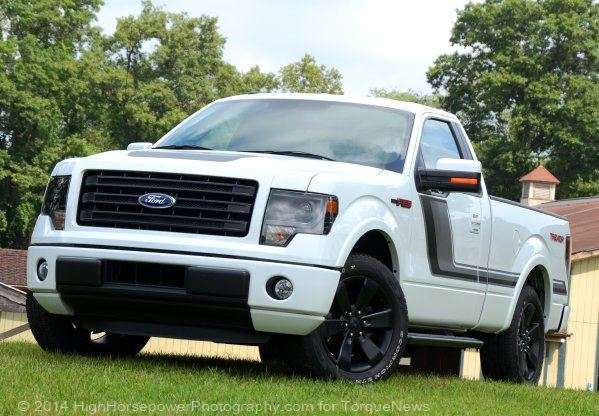 The arrival of the 2015 Ford F150 is right around the corner and while the Motor Company will offer five trimlines plus the FX4 Off Road package, there has been no word on the future of the sporty Tremor package – which is a shame considering the many upsides to the small, powerful F150.
Advertisement

The 2015 Ford F150 will be offered in XL, XLT, Lariat, King Ranch and Platinum trim plus upgrade packages such as FX4, Chrome and Sport. Unfortunately, there has been no mention of a 2015 F150 Tremor and having recently spent time driving the 2014 F150 Tremor, I’m disappointed to hear that there won’t be a Tremor based on the all-new half ton Ford pickup as it would only make a great package even better.

The 2014 Tremor package was only available on the F150 with the regular cab and short bed and while the previous regular cab short bed pickups have not been available with the 3.5L EcoBoost engine, Ford has equipped the smallest F150 with the twin turbocharged V6 only for the Tremor package. With 365 horsepower and 420lb-ft of torque in such a small half ton truck, the Tremor packs lots of power in a very compact packaged, but Ford didn’t stop there – also adding a 4.10 final drive for the best acceleration possible.

The F150 Tremor also comes with the FX Appearance Package which adds unique stripes on the sides and hood, black 20 inch wheels wrapped in performance tires and black trim from the bumpers to the grille to the headlights.

The 2014 Ford F150 Tremor looks great and runs great, hitting the market as one of the quickest factory built trucks on the market while still offering pretty solid fuel economy and solid towing capabilities. Whether you only care about going fast or you want a sporty regular cab truck that will also pull over 8,000lbs, the Tremor is a beautiful option…one that only lasted for one model year as there is no mention of a new Tremor in the new generation F150.

The Advantages of a 2015 F150 Tremor
The idea of the 2014 F150 Tremor was to put one of the most powerful engines in the smallest, lightest truck configuration possible. The 2015 F150 is going to be lighter than comparable 2014 models and in the images from Ford Motor Company of the various packages in “Sport” form, it looks like the lines of the 2015 F150 would cater to a bold, sporty regular cab pickup.

Of course, there is also the possibility that the 3.5L EcoBoost V6 could get a few more ponies for the 2015 model year F150 so a new Tremor that weighs less and has more powerful would be even more fun than the already very exciting 2014 F150 Tremor.
Finally, the Ram Truck brand has seen a fair amount of success with their new Express and Tradesman models – both of which pack the 5.7L Hemi V8 (their biggest half ton engine) in a regular cab, short bed pickup. There is definitely a market for a smaller, powerful half ton truck so I’m keeping my fingers crossed, hoping that Ford will roll out a Tremor package for the next generation F150 very soon.

Max wrote on August 29, 2014 - 3:39pm Permalink
Sure, it's a cool truck. And people are willing to shell out a lot for a cool truck (Raptor) But they aren't willing to do so for -this- cool truck. I saw one on the lot of a local and very busy Ford dealership back in January... it's still there(Aug 29th)
Brandon wrote on August 29, 2014 - 7:27pm Permalink
Max lol i believe it.... Tremor just isnt a practical everyday truck
M9Powell wrote on September 29, 2014 - 3:59pm Permalink
I agree they should continue it. The only reason the 2014 isn't selling is it's grossly overpriced. I'm hoping to get one at a big discount after the aluminum truck comes out. I guess I'm weird & old fashioned, but I find extra cabs & 4 door pickups fuuuggly & useless.