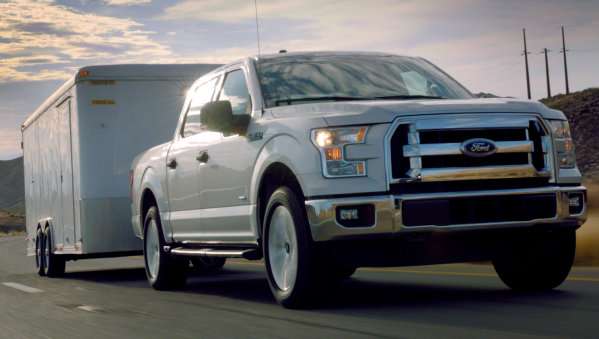 Earlier this week, Ford Motor Company rolled out the first official numbers for the new 2.7L EcoBoost V6 and we were so busy focusing on that new twin turbo mill that we breezed right past the specs for the new base model 3.5L V6 – an engine that is the most capable among half ton entry level pickups.
Advertisement

The 2015 Ford F150 is promised to be the most efficient and the most capable half ton Ford truck of all time and a big part of those lofty goals is the lineup of powerful engines. The 6.2L V8 is gone, leaving the 3.5L EcoBoost V6 to serve as the top of the line engine while the 5.0L V8 is the only eight cylinder engine in the mix right now. A new 2.7L EcoBoost V6 will offer solid horsepower and torque for those more fuel economy minded buyers without compromising capabilities and the new 3.5L V6 will serve as the base model engine for the next generation F150.

We don’t have specs yet for the 3.5L EcoBoost V6 or the 5.0L V8, but Ford offered up the first specs for the new 2.7L EcoBoost and the 3.5L V6 earlier this week. I was so focused on the new EcoBoost that could further push the 5.0L down the take rate ladder that I totally skipped over the new base model V6…so today we take a look at that new entry level engine.

The 2015 Ford F150 Base V6
New for the 2015 Ford F150 is a naturally aspirated V6 that will serve as the standard engine on the lower priced trimlines. This mill displaces 3.5 liters and offers 283 horsepower and 255lb-ft of torque. Those of you who are familiar with the current (2014) F150 engine lineup may recall that the base model V6 on sale now measures 3.7L, offering 302 horsepower and 278lb-ft of torque…making the new base V6 less powerful in both categories. This comes as quite a surprise, as we don’t often see a reduction in power among the half ton truck segment, but Ford points out that with the weight reduction performed to the 2015 F150, new models with the 3.5L base V6 will have a better power to weight ratio than 2014 F150 pickups with the 3.7L base V6.

Fortunately, while the base model V6-equipped 2015 Ford F150 will have less power than the outgoing models, it will become significantly more capable. The new 3.5L V6 will allow a properly equipped 2015 F150 to tow 7,600 pounds while the current 2014 F150 in its strongest base form (4x2, 145” wheelbase) will only tow 6,700lbs, making the new base V6 better than the outgoing model and – according to Ford – this new 3.5L V6 is the best engine in the class in terms of max towing numbers. The base V6 2015 F150 will also haul 1,910lbs, which is less than the 2014 models, but only by 20 pounds. Of course, Ford has also suggested that this new base model engine will offer better fuel economy than the current 3.7L V6, but we won’t learn those official numbers until closer to the dealership launch of the next gen models.

The New Base Model May Not Matter Much
Even though the new 3.5L base V6 in the 2015 Ford F150 will be more capable and more efficient; it will probably play a very small part in the overall half ton sales picture. The current base V6 has joined forces with the 3.5L EcoBoost engine to help V6 engines lead V8 engines in F150 sales. With the introduction of the new 2.7L EcoBoost, those folks who have picked the base model engine in the past due to fuel economy may lean towards the new smaller EcoBoost V6, as it will offer solid power, impressive capabilities and great fuel economy. That new 2.7L V6 is probably a big reason why Ford was comfortable making the new 3.5L base V6 less powerful than the outgoing models, as that will encourage many buyers to pick the more powerful (and more expensive) EcoBoost engine.